There is no religion in the world that emphasizes that much upon the well being of its followers than Islam. Besides giving moral guidelines to its followers, Islam also gives ways and instructions to help the followers live life in the best manner possible. 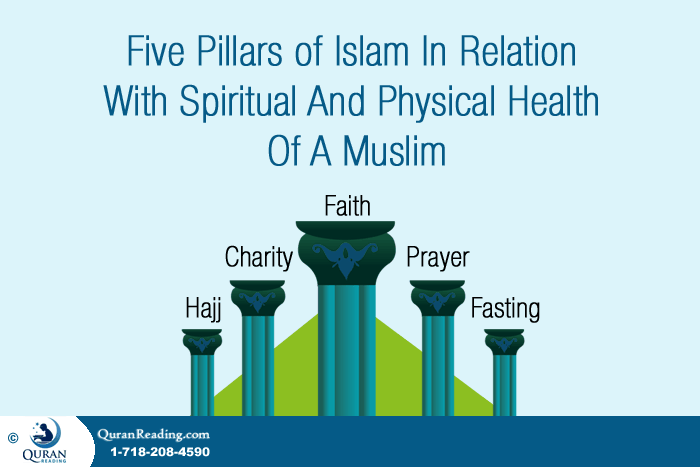 If analyzed form health perspective, this ayah of Quran, points towards the fact that Allah Almighty has given the best to mankind in the form of all the natural things, whether it’s the constituents of human body or the atmosphere we live in, however, it’s the human tampering with the resources that causes decline in health. The evident example of it can be seen in the form of increasing pollution, the eating of junk and unhealthy foods, adopting an unnatural life style and so on.

The lines below explain how the five pillars of Islam help increase the spiritual and physical health of its followers.

There cannot be spiritual stability in a person until and unless he expresses his belief in the authority of Allah Almighty and submits to His being the Creator of the Universe and the only Lord. When a follower has such kind of belief, then all the calamities and difficulties that a follower faces appear light as the follower is aware of the fact that Allah Almighty is on his side and He never lets those down who count on Him. Therefore, the reason why a Muslim should never be pessimistic even in the worst conditions is the fact that he has belief in Allah Almighty and His Mercy. Thus, a Muslim always finds the silver lining even in the worst conditions which keeps him spiritually healthy.

Ablution- Performing Wudu (Ablution) is a requisite for performing prayer. A Muslim cannot perform prayer until and unless he has performed ablution. The performing of ablution involves exposing all the apparent body parts like mouth, face, nostrils, feet, hands, and ears to water thus helping them in their cleaning. Therefore, when a Muslim performs ablution five times a day before the prayers, cleanliness is ensured and a Muslim removes the body from all the germs, which accumulate if the body parts are not washed regularly. Hence, ablution before prayers improves hygiene that adds to physical health.

Quran Recitation- For Muslims Quran is the ultimate source of guidance and gives a proper code of conduct for living life. Besides being a beacon of guidance, Quran is also recited during the prayers and this activity helps improve both the physical and spiritual health of a person. This is why Muslims emphasize on Quran education for children, so that when they grow up they are spiritually and physically healthy. In Quran Allah Almighty says:

“O mankind! There has come to you a direction from your Lord and a healing for the (disease) in your hearts- an for those who believe a guidance and mercy!” (10:57)

This ayah clearly states that Quran is the cure for diseases of heart, which can be interpreted both literally and metaphorically. Research is been conducted about the effectiveness of recitation of Quran during the prayer and the effect it has on the heart. As far as the spiritual health of the heart is concerned, Quran recitation during prayer definitely helps elevate the health of spirit.

Physical Exercise- Performing prayer requires making certain kinds of body postures. These body postures if viewed from the perspective of physical exercise work on all the major muscles of the body. Therefore, performing prayer five times a day is a physical activity and keeps the body healthy.

Islam gives the concept of Zakat (charity), which literally means to purify or cleanse. Although it apparently cleanses the wealth of a person, however, on a deeper level it actually cleanses the soul of a person and decreases the love for worldly wealth and money from the heart of a person, the greed of which is one of the biggest curses.

Fasting is the fourth pillar of Islam, and by far the best example of physical health for people who are fond of dieting to lose weight. Besides being a religious obligation, fasting helps a person clean the body from all the impurities that accumulate in it because of eating throughout the day. Moreover, in the month of Ramadan, during fast Muslims refrain from eating or drinking all kinds of things from dusk till dawn, therefore, those who wish to quit smoking or control their overeating, fasting is the best solution. Thus, fasting helps improve the physical well being of a Muslim.

In short, Islam is not just prayers and moral obligations; rather Islam is complete code of life and enables a Muslim to enjoy life in the best way possible, whether it’s spiritual or physical.

May Allah Almighty help us all enjoy the life with best of health in both spiritual and physical aspect. Ameen!