For every problem that a Muslim has, every dilemma that he or she faces, every uncertainty that they come across, any celebration they come across, for each one of them they turn towards the verses of Quran and try finding the answers and solutions in the light of the verses. A Muslim can never deny the instructions and the implications of the ayahs of Quran therefore, whenever they desire ultimate truth or judgment, they find the answers from Quran. 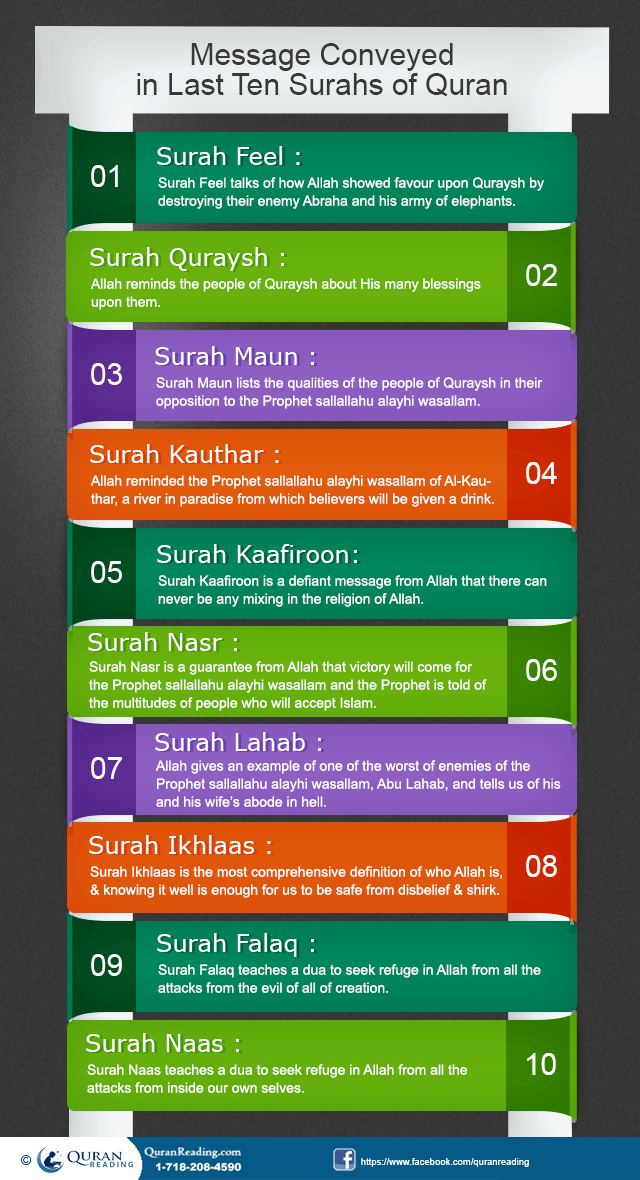 This blog article today on QuranReading.com discusses about the message Allah Almight wants everyone to learn from the last 10 surahs of the Holy Quran.

Surah Feel is the 105th Surah of Quran and it speaks about the incident of the attack of Makkah by the elephant army of Abraha. Before Prophet Muhammad (PBUH) Abraha was a king in Arabia and he conspired to destroy the House of Allah with his elephant army. Allah Almighty protected His house and the elephants were killed by small birds called ‘ Ababeel’ who threw small stones on the elephants and with the help of Allah the elephants died as soon as the pebbles struck them. The year in which this incident took place in the same year Prophet Muhammad (PBUH) was born which resonates with the event symbolically as the defeat of Abraha was the defeat of tyranny which started with the birth of Prophet (PBUH).

Surah Quraish is the 106th Surah of Quran and it talks about the privilege which Allah Almighty had given to the tribe of Quraish. The tribe of Quraish was the head tribe in Arabia and the custody of the House of Allah was their responsibility. Because of this distinction, Quraish enjoyed trade in the east as well as in the west without any problem. Thus, in this Surah Allah Almighty tells about the blessing of distinction and reverence, which He had bestowed upon Quraish and the best of which was Prophet Muhammad (PBUH) being from this tribe.

The Surah Maun is the 107th Surah of Quran and it speaks of the trait of the people who were in opposition of Prophet Muhammad (PBUH). These are the people who did not believe in the Judgment day, they drove the poor away did not encourage feeding the hungry, were heedless of their prayer and whatever prayer they offered it was merely for the display to people. Thus, Allah warns these people regarding the punishment they are going to face. From this Surah a Muslim can also get the message and make alterations in his or her lifestyle.

Surah Kauthar is the 108th Surah of Quran and one of the most Surahs as well. The Surah speaks of the river of Kauthar that will be granted to Prophet Muhammad (PBUH) on the Judgment Day from which the believers would drink, and those who opposed Prophet (PBUH) will be cut off from it. This Surah was in response to the people of Quraish who opposed Him and who rejoiced on the death of His Son. Thus, Allah Almighty revealed this Surah to provide solace to the believers and Prophet (PBUH) in addition to it being an intimation for the non-believers.

Surah Nasr is the 110th Surah of Quran that speaks of the guaranteed prediction that Allah Almighty gave to Prophet (PBUH) pertaining to the victory in war. Allah told Him that people will enter in Islam in multitude, however, whilst all this the Muslims should remain humble and modest and should praise Allah and seek forgiveness from Him.

Surah Massad is the 111th Surah of Quran and speaks about one of the worst enimies of Prophet Muhammad (PBUH). Abu Lahab was the greatest oppose of Prophet (PBUH) and his wife was also the partner in all what they did against Prophet (PBUH). In this Surah Allah Almighty tells that both tof them are the dwellers of hell and they are the fuel of the fire of hell. This shows the kind of end that the opposers of Prophet (PBUH) would meet and the afterlife they would have.

Surah Ikhlas is the 112th Surah of Quran and it is a proclamation of the message of Tawheed of Islam. In this Surah Allah Almighty tells Prophet (PBUH) to proclaim that He is the Only Lord and that He has neither any partner, any parent, any offspring and nor will any one be equal to Him. These verses are the most quoted verses when it comes to explaining the message of Oneness of Allah in Islam.

Surah Falaq is the 113th Surah of Quran and it is a supplication that is directed towards seeking refuge in Allah Almighty from all the evils, black magic and from the effects of jealousy. This Surah can effectively be utilized pertaining to warding off any such effects if a Muslim is facing it in his or her daily life.

Surah Nas is the last Surah of Quran and it is also a supplication which is intended towards protection from the inner self. There is Shaytan in the inner self of a person that raises all kinds of doubts and evil intentions which a Muslim should avoid by reciting this Surah.

In a nutshell, the last ten Surahs of Quran are the most recited Surahs as they are easy to remember and they contain some key concepts pertaining to Islam. Therefore, every Muslim must try to memorize these Surahs and recite them either in prayer or whenever the chance becomes available.