It is the basic belief of every true Muslim that this world is a transitory one and will finally culminate on the judgment day. On the Resurrection day, everyone will be accountable for his deeds committed in this mortal world. Pious Muslims will be rewarded with paradise where they will be the beneficiaries of God’s unbound blessings and will live there forever. On the other hand, wrongdoers and followers of satanic ways will perpetually burn in a fire that is million times stronger than the ordinary worldly fire. 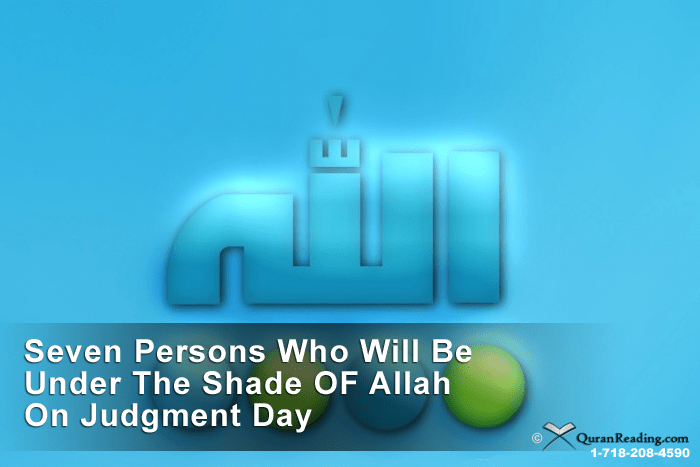 But Allah Almighty loves His creatures and His love surpasses the love of everyone in the world including the love of mothers for their children. That is why Allah does not want human beings to burn in hell and want to save them from an everlasting curse. Allah has proclaimed many guidelines which every person in the world can follow to earn his place in paradise and avoid atrocities of hell.  According to a Hadith of Holy Prophet (PBUH), there will be seven types of person who will be under the shade of Allah on Judgment. Those persons are,

The concept of justice is the foundation of the religion of Islam. Especially, it is very important for any Muslim ruler to be just and compassionate to all people regardless of their social status and wealth. He needs to keep one thing in mind that it is actually Allah who bestows ranks and can strip anyone from his position as well. As Prophet Muhammad (PBUH) said,

“Allah does not bless a people among whom a weak man is not given his right.”
[At-Tirmidhi]

The one who is attached to Mosques

“Allah will prepare for him who goes to the mosque(every) morning and in the afternoon an honorable place in Paradise with good hospitality for (what he has done) every morning and afternoon goings”. Sahih Bukhari [11:631]

The mosque is the home of Allah and anyone who goes to mosque five times a day to offer prayers will definitely find a place in paradise.

Youth is the age of unbridled desires and insatiable imaginations and it is very difficult to divert to ways of Allah in youth. However, those young Muslims who follow the teachings of Islam with full zeal and zest and avoid the traps of Satan are especially compensated by Allah in the next word. It is especially important for young Muslims to follow the life of Holy Prophet (PBUH), resist the mundane temptations and learn and recite Quran either through Quran tutors or online Quran recitation academies.

Love is only for Allah

“The believers are nothing else than brothers, so make reconciliation between your brothers, and fear Allah, that you may receive mercy.” [Quran 49:10]

The person who is ready to sacrifice all his relations and property for the sake of Allah is especially praised by All Mighty. According to Islamic teachings, a Muslim’s love for his relatives cannot surpass his love and affection for Allah and such persons who follow that principle will be saved from the unbearable heat of the judgment day.

It is almost impossible to reject the call of any unchaste women but such Muslims who successfully manage to avoid adultery are the favorites of Allah. Allah has announced strict punishment for adulterers both in this world and in the world hereafter. Allah says in Holy Quran,

The one who gives charity silently

Giving charity secretly is one of the most favorite actions of Allah and such Muslim will not even get close to the sweltering heat of the sun on Resurrection day. Secret charity means your charity is only for the sake of Allah and you are not being chivalrous just to show off.

Such a person whose heart is filled with unconditional love, glorification, and reverence for Allah and he sheds tears in such a place where he is hidden from the worldly eyes of people. While shedding tears he remembers and praises Allah and asks for His forgiveness and mercy. This person has made his future in the next world completely safe and he is a member of paradise. As Allah says in The Holy Quran,

“The believers are only those who, when Allah is mentioned, feel a fear in their hearts and when His Verses (this Qur’an) are recited to them, they (i.e. the Verses) increase their Faith; and they put their trust in their Lord (Alone).” [Surat Al Anfal: 2].

Hence it is absolutely important for every Muslim to inculcate these qualities in his or her life to avoid the wrath of God on an all-important day. They need to learn Holy Quran no matter what difficulties they face and no matter where they learn the Quran whether it is in the mosque, school or online Quran teaching. They need to follow the teachings of Allah to become a staunch Muslim to end up in paradise. There is no other option.