Like majority of other religions of this world, Islam is also based on the concept of reward and punishment. Those who do good deeds and stick to the path of righteousness are rewarded both in this world and in the world hereafter, whereas those who do the contrary are punished. The ones who are blessed receive Jannah as reward, while the ones who are otherwise have the inevitable Jahanum waiting for them. 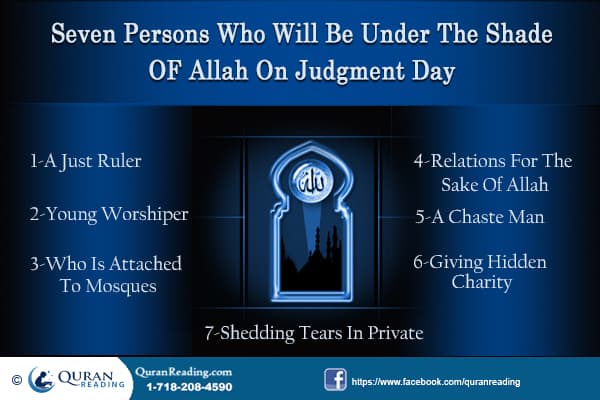 Although all the righteous will receive Jannah as reward for their deeds, however, there are special people who for their specific special deeds would receive higher and greater reward in Jannah. The bounties and boundaries of Jannah are unlimited therefore there should be no doubt in the fact that people with better deeds would receive better reward compare to those who with their ordinary deeds of righteousness would land a place in Jannah. The lines below discuss seven special people who will be under the shade of Allah on the Day of Judgment.

“There are seven whom Allah will shade in His Shade on the Day when there is no shade except His Shade: a just ruler: a youth who grew up in the worship of Allah, the Mighty and Majestic; a man whose heart is attached to the mosques; two men who love each other for Allah’s sake, meeting for that and parting upon that; a man who is called by a woman of beauty and position (for illegal intercourse), but he says: ‘I fear Allah’; a man who gives in charity and hides it, such that his justify hand does not know that his right hand gives charity; and a man who remembered Allah in private and so his eyes shed tears.” (Bukhari and Muslim)

Out of several duties that come with leadership, the most imperative one is the establishment of justice. A society can survive without money, with minimal resources and all sorts of difficulties, but the one thing without which a society can never survive is the lack of justice. A society in which the poor do not receive justice that society cannot survive for long and that society gets prone to all sorts of financial, social, political and ideological differences and difficulties. Therefore, the heavy responsibility of establishing justice relies on the ruler, the just he is in establishing and maintaining justice in the society, the more prosperous will the society be and the more he will rise higher in the court of Allah Almighty.  Prophet Muhammad (PBUH) said in His hadith:

“Allah does not bless a people among whom a weak man is not given his right.” (Tirmidhi)

Therefore, there should be no doubt in a just ruler being among the ones who will be under the shade of blessings of Allah on the Judgement Day.

2. Who Is Attached To Mosques:

Mosques are the place of worship in Islam and there are numerous hadiths of Prophet (PBUH) in which He has emphasized on the importance of going to mosque for prayer. Besides being place of worship, mosques also stand as a symbol of social gathering and equality. In mosques Muslims gather five times a day thus the social fabric gets strong, moreover, the standing of all of the people of society in a single row without any discrimination promotes equality and brotherhood. Thus, the one who loves mosques and goes there will also be under the shade of Allah on the Judgement day. Prophet (PBUH) said in a hadith:

“Allah will prepare for him who goes to the mosque (every) morning and in the afternoon an honorable place in Paradise with good hospitality for (what he has done) every morning and afternoon goings.” (Bukhari)

Youth is the age when one is full of energy and spirit. It is a time when one thinks that he is the center of the universe and everything revolves around him. In youth one wants to be above all and gain all the prominence possible. However, if in this age one yields in front of Allah and worships Him, it truly shows character and represents the fact that besides all the energy and strength one still relies on Allah and asks for His help and blessing. Prophet (PBUH) said in a hadith;

It is quite natural that in old age when one does not have the energy, attention or spirit as in youth one starts praying and seeks forgiveness from Allah for a better world hereafter. However, those who realize this in their prime are the ones who get accepted and rewarded by Allah and receive His shade on the day of Judgment.

4. Relations For The Sake Of Allah:

“The believers are nothing else than brothers, so make reconciliation between your brothers, and fear Allah, that you may receive mercy.” (49:10)

Therefore, those who love each other and who part ways with each other for the sake of Allah are the ones who will stand under the shade of blessing of Allah Almighty on the day of Judgment.

Sexual temptations are one of the hardest to resist for humans in general and males in particular. Sexual call from a woman are one of the hardest things that a man has to resist, therefore, those who are able to resist all such calling and avoid or reject them because of the fear of Allah are the ones who are true believers and who sacrifice their animalistic desires for the sake of Allah, hence their standing in the shade of Allah should never be doubted. In Quran, Allah Almighty says:

The world is full of people who give charity to help other people. However, sadly, among them are the ones who give charity just for the sake of their reputation and whenever they make some charitable donation they boast about it. This boasting represents their wish for acknowledgement for their good deed which is against preaching of Islam where it tells people to be charitable and then not boast about it in any way. Thus those who give charity without the need or want of recognition are the ones who do this act just for the sake of Allah and keep the spirit of charity alive. In Quran Allah says:

“O you who have believed, do not invalidate your charities with reminders or injury as does one who spends his wealth (only) to be seen by the people and does not believe in Allah and the Last Day. His example is like that of a (large) smooth stone upon which is dust and is hit bya  downpour that leaves it bare. They are unable (to keep) anything of what they have earned. And Allah does not guide the disbelieving people.” (2:264)

Thus, those who give charity and hide it are the ones who fulfill the spirit of charity and thus they shall be rewarded on the Judgment day.

The world is full of all kinds of pretentious people. There are people who do good deeds just for the sake of appearing good in front of the people. If the fear of their reputation were not at stake they might refrain from doing all the good they apparently do. Similarly there are people who appear fearful of Allah in front of people and do it just so that people might think them as pious. However, those who fear Allah in private and in that fear they shed tears are the ones who qualify for the shade of Allah Almighty on Judgment day. In Quran, Allah Almighty says about them:

“The believers are only those who, when Allah is mentioned, feel a fear in their hearts and when His Verses (this Quran) are recited to them, they (i.e. the verses) increase their faith; and they put their trust in their Lord (alone).” (8:2)

Therefore, those who fear Allah in private are the ones who shed tears out of pure faith and there is no pretention involved, hence, making them eligible for a better place in afterlife.

In short, the aforementioned seven people are not some supernatural beings, nor are they born with special gifts, rather they chose to act in the right way under the conditions they are either exposed to or the conditions which they have to live with. Therefore, out of these seven, a person must try fulfilling at least a single one so that he could also be among the blessed ones on the Judgment day.