Quran is the word of Allah Almighty, therefore, in order to understand it in the true sense, a person has to sharpen his or her intellectual ability as well as increase the knowledge. When one is at a particular intellectual level, only then can he or she start understanding the true message, which Allah Almighty conveyed through words of Quran. 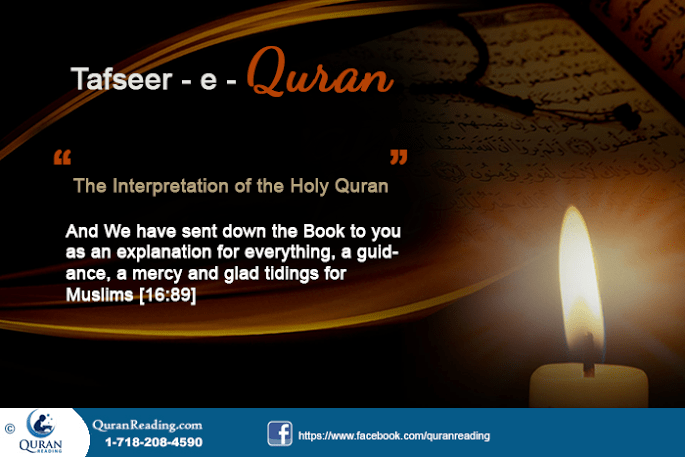 Pertaining to the explanation of Quran for the understanding of general audience, different people have tried to write the Tafsir of Quran. Although Muslims recite Quran and try reading it with translation, however, the reading of Tafsir has its own importance. The lines below discuss what Tafsir is, why is it important and its different kinds.

The word ‘tafsir’ comes from the root word ‘fassara’, which means to expound or to explain. Therefore, Tafsir of Quran means the explanation or interpretations of the verses of Quran. The Tafsir of Quran is not something done by anyone with ordinary or common intellect and understanding of Islam, rather it is done by people after obtaining extensive knowledge about Islam and reading the history of Islam thoroughly. The objective of a Tafsir is to find out the true meanings of the verses of Quran, so that the audience could benefit from it and know the right and true message of Quran.

The Importance of Tafsir:

There is a variety of reasons why Tafsir is important and people consult Tafsir when it comes to understanding of Quran. The few important reasons that make Tafsir important are as follows:

When it comes to the different types of Tafsir, there are three major types, namely, Tafsir bil Riwaya and Tafsir bil Ray. These are the two major types and all the Tafsirs that are written in one or more of these types. The lines below explain each type of Tafsirs.

Quran – It happens while reading Quran that a person finds a statement unexplained and wants to search for the answer. In this regard, Quran itself is the best answer as the things that are mentioned in Quran at one part are also mentioned in another part of Quran as well. Thus by relating those ayahs, one can find answer to the questions that may arise. For instance in one ayah of Quran, Allah Almighty says:

Thus, from this ayah of Quran it becomes clear that the ayah to which Allah Almighty referred as the blessed night in an earlier ayah is actually the Lailat al-Qadr. This way, by using Quran and relating its ayahs, one can find the explanation and answers to the ayahs of Quran, which is the first kind of Tafsir.

“And eat and drink until the white thread of dawn appears to you distinct from its black thread..” (2:187)

Narrated ‘Adi b. Hatim: I said: ‘O Allah’s Apostle! What is the meaning of the white thread distinct from the black thread? Are these two threads?’ He said: ‘You are not intelligent, if you watch the two threads’. He then added, ‘No, it is the darkness of the night and the whiteness of the day’. [Itqan 11. pp. 191-205.]

Thus, this way the Companions would ask Prophet (PBUH) questions and get answers about the verses of Quran.

It is the second kind of Tafsir of Quran, which although is not based on the transmission of knowledge, rather it is based on reasoning and what is called ‘ijtihad’. The thing to note is that Ijtihad does not mean abrupt or random interpretations, rather it is done by comparing the verses, traditions and sayings of the renowned Companions of Prophet Muhammad (PBUH). Thus, by this comparison and contrast, scholars reason and reach a particular interpretation of the verses of Quran.

In short, the Tafsir of Quran is of grave importance if a person wishes to understand and learn the Holy Quran with its true essence and meaning. With the help of a Tafsir, a Muslim is able to connect between Quran, Sunnah and sayings of Companions of Prophet (PBUH) along with the views of different scholars, thus the understanding of Quran is way greater than simple reading of translation.