In present times, one of the greatest allegations that Islam as a religion in general and the Muslims in particular face is the coercion involved in converting people to Islam. The misconception about Islam is that it is a religion that allows or rather commends its followers to use force as a means of making people convert to Islam. This is a serious misconception and Islam in its preaching does not imply any use of force for converting people to Islam. 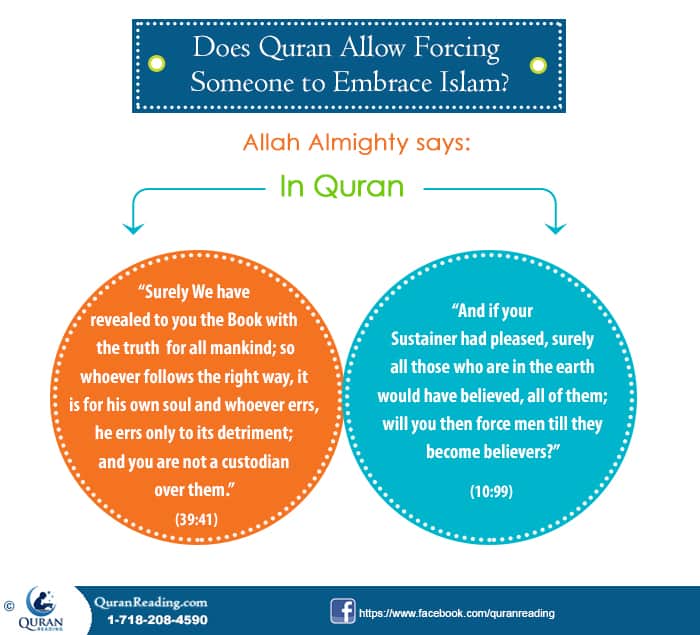 Islam is a religion of peace and it encourages its followers to be peaceful and live in harmony with one another as well as with people of other faith. The allegation that all the Islam that has spread is due to force or whatever expansion that is taking place is courtesy of the use of force is wrong. Islam does not encourage any such notion and wants its followers to be peaceful and spread Islam in the most moderate and thoughtful way possible. The lines below discuss the way in which Quran condemns the use of force when it comes to spreading the religion and making others accept Islam.

“Surely We have revealed to you the Book with the truth  for all mankind; so whoever follows the right way, it is for his own soul and whoever errs, he errs only to its detriment; and you are not a custodian over them.” (39:41)

From this ayah of Quran it is clear that Allah Almighty has sent the truth down in the form of Islam and the Book Quran, therefore, finding the truth and seeking guidance rests upon the person and it is not the duty of Prophet Muhammad (PBUH) to make people accept Islam. The message is clear from this ayah that those who wish to find guidance will come to Islam and those who do not do so, they are free to not do so. Prophet (PBUH) is only responsible for the ones who accept Islam and who want to walk on the path of righteousness, those who do not wish to do so are not His responsibility or in other words those who wish to accept Islam at present are free to do so and Muslims are not accountable for their disbelief. Therefore, if such is the message then one cannot possibly assume that Islam forces its followers to use coercion as a means of spreading Islam.

People argue that the need behind the spread of Islam is that Muslims could rule the world and force upon others their Islamic way of living life. In Muslim belief Allah is the Supreme and He can do whatever He wants, therefore, the idea that Allah wants the spread of Islam through force is wrong because if He wanted people to be Muslim they would be Muslim, as He says in Quran:

“And if your Sustainer had pleased, surely all those who are in the earth would have believed, all of them; will you then force men till they become believers?” (10:99)

This ayah is a simple and straight justification behind the futility of use of force pertaining to spread of religion in Islam. In this ayah Allah Almighty clearly states that if He willed, all the people in the world would have been Muslims, therefore, there is no need of forcing people in becoming believers. Ergo, a person must understand that Allah wants people to come towards truth with understanding and out of willingness and not by force. Believing in the religion and its constituent from the heart is as important as proclaiming it from the tongue in Islam, therefore, a forceful proclamation of Islam from the tongue holds no value in Islam if the religion is not believed in it from the heart. Ergo, force cannot cause a person to change his or her heart about Islam therefore, it is not encouraged means of propagation of Islam.

As far as fighting the non-believers, overpowering them and then forcing them to convert to Islam is concerned, Allah Almighty says in Quran:

This ayah gives the justification for the use of force by Muslims against the non-believers. The use of force is not conditioned to the spread of religion, rather it is conditioned to the fact that those who harm the religion or those who aid in inflicting harm to Islam should be the ones who must be dealt with force. Otherwise, those who do not cause any harm to Islam or to Muslims should be dealt with kindness and justice. Therefore, there is no rationale behind the use of force as a means of spreading the religion in Islam and it is all but a false propagation.

Moreover, as far as the means of spreading the religion is concerned, Islam commends the use of moderation and reasoning so that people could be convinced and not forced to Islam. Allah Almighty says in Quran:

From the ayah it is clear that when it comes to preaching of religion and getting other people to embrace Islam, the proposed way is of reasoning and with good argumentation. Therefore, it seems illogical to presume that a religion that has its bases in good reasoning and best manner would encourage something like the use of force for making other people accept Islam.

In a nutshell, the use of force or any means of coercion for making people accept Islam is not encouraged in Quran or hadith. The best thing that a Muslim can do to preach Islam is to preach it with wisdom in argumentation and by incorporating the Islamic values in one’s character, afterwards it rests upon the person whether he or she believes in Islam or not. There is no room for compulsion of any sort.