Hazrat Abu Bakr (R.A), born in Makkah in 573 A.D, belonged to one of the highly respected families of Qureyshi tribe, Bani Tamim. He was two years younger than Hazrat Muhammad (PBUH), sharing the common descent with Him.  His surname was Abdullah, but he was commonly known as Abu Bakr because of his forefathers. His parents Uthman and Salma were also recognized by their inherited names, Abu Quhafah and Ummul Khair.

Right from his early age, he was quite different from the rest, and was more or less similar in his behavior with that of the Messenger (PBUH) of Allah, having qualities of truthfulness and honesty. Because of this, he was the closest companion of Rasulullah (PBUH) from his youth, and remained till the end. He took on trade as his profession, and was well known for his integrity in dealings, due to which people used to keep their belongings with him as trusts. His services to the Religion of Peace exceedingly distinguished among all the devoted associates of the Holy Prophet (PBUH).

Some of the most significant instances from his life, which shows his great position in the history of Islam, are:

Abu Bakr had spent most of his time with Muhammad (PBUH), and knew about His personality characteristics of candor, sincerity, uprightness, and reliability etc. So, when the Apostle (PBUH) of God told him about the revelation, he readily accepted Him as the Messenger of Allah and single mindedly embraced Islam.

Earliest Person To Invite Others Towards Righteousness After Prophet (PBUH)

As soon as he entered the religion of Islam, he started actively participating in the cause for calling others towards it. First, he went to ‘Uthman, Talha, Zubair and Said, who acknowledged his message. Then, he encouraged other prominent figures of Qureysh including ‘Uthman bin Maz’un, Abu’Ubaidah, Abdur Rahman bin ‘Auf, who also responded positively. In this way, he became the very first individual after the Holy Prophet (PBUH) to preach Islam.

Although He was considered as one of the highly respected man of Qureysh, but the day he opposed the idolaters of many gods and previous customs, and embraced morality, he was ridiculed and treated badly by the disbelievers. He asked Rasulullah (PBUH) to invite people towards Allah`s message explicitly, he was permitted to it. When he openly asked people to come towards rectitude, which was the very first sermon, the history of the Religion of Peace, he was dealt with quite severely resulting in losing consciousness. So, he always took the act of Dawah (invitation) towards Islam very seriously and helped the Holy Prophet (PBUH) in His expedition.

The Chosen One Among All Companions Of Prophet (PBUH)

The great importance of Abu Bakr among all the companions of the Prophet (PBUH) is evident from the fact that he was chosen as the one to accompany Rasulullah (PBUH) while immigrating to Madina. Allah Almighty has described that journey in the Holy Quran as: 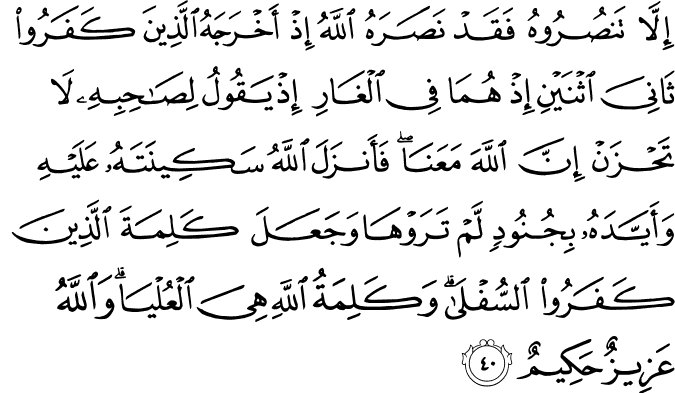 If you do not aid the Prophet – Allah has already aided him when those who disbelieved had driven him out [of Makkah] as one of two, when they were in the cave and he said to his companion, “Do not grieve; indeed Allah is with us.” And Allah sent down his tranquility upon him and supported him with angels you did not see and made the word of those who disbelieved the lowest, while the word of Allah – that is the highest. And Allah is Exalted in Might and Wise. [Quran, 9: 40]

Although Abu Bakr trembled non believers had gathered around the cave they were keeping inside, so that they could them. But the Apostle (PBUH) of Allah remained calm and told Abu Bakr about the Almighty`s Help, and they were eventually relieved of that worrying time. It highlights that he was the only one who was taken by the Messenger (PBUH) of God with Him while emmigration. It also shows his great stature among the rest of the close acquaintances of the Prophet (PBUH). That is why Hazrat Muhammad (PBUH) once said:

“Abu-Bakr has favored me much with his property and company. If I were to take a Khalil (an intimate friend) from mankind I would certainly have taken Abu Bakr.” (Bukhari)

Abu Bakr (R.A) was the one who submitted everything in the way of Jihad (fighting for Allah`s cause) on the occasion of the Last Ghazwa (Battle in which Hazrat Muhammad PBUH has fought) of Tabooq. That is why Rasulullah (PBUH) has talked about his property in this Hadith. He also used to spend his earning on freeing newly entrants of Islam from slavery. Besides, his company was also dearest to the Holy Prophet (PBUH) which is also discussed in terms of taking only him as a closest friend in Jannah (paradise) from all mankind.

The Most Faithful Among All The Believers

Abu Bakr was the one who blindly believed in everything Hazrat Muhammad (PBUH) told him about Allah`s revelation. He was never in doubt over his truthfulness, which demonstrates the great level of his conviction in the teachings of Islam. The Holy Prophet (PBUH) is reported to have said in regard:

“ If the Eeman of Abu Bakr was put on one side of the scale and the eman of this entire Ummah on the other, Abu Bakr’s eman would have outweighed. “ (At-Tirmidhi and Ahmad)

Such is the highest level of Abu Bakr`s devotion to Islam that his faith is referred as more in weight than the conviction of the rest of the believers by the Apostle (PBUH) of Allah. He was the one who stood by Rasulullah (PBUH) when the treaty of Hudaibya was being made, when all the rest opposed it and judged it harmful to Muslims. But the history shows the decision was quite right as Muslims eventually won the Battle of Makkah and ended the oppression of non believers. Due to his great stance, he was always chosen as the second person to lead the Muslim prayers after Prophet (PBUH). During every battle, he remained close to Hazrat Muhammad (PBUH) and never trembled against the non believers for a second. There are many other instances on which Abu bakr (R.A) remained steadfast along with the Prophet (PBUH), hence, no one was as faithful as him among all the believers.

Earning The Title of As-Saddiq (The Truthful One)

The incident of Prophet Muhammad`s (PBUH) Mi`raj (visiting Jerusalem and heavens) was beyond a common person`s belief, as it took place in no time. When the Messenger (PBUH) of God told people about it next morning, all of them were astonished and were in a state of disbelief, except Hazrat Abu Bakr (R.A). When others came to him and asked whether one should accept this fantasy as accurate?! Thereupon, he said: “Yes! If the Prophet (PBUH) says so”. They could not believe it and asked again the same question. Abu Bakr (R.A) told them that he believed in each and every word of His. Thus, Rasulullah (PBUH) gave him the title of “As-Saddiq”, which means “the truthful and genuine person in his devotion”.

First Caliph In The History Of Islam

Hazrat Abu Bakr (R.A) was rated so highly among the believers that He was given authority to lead the Muslims after demise of the Holy Prophet (PBUH). Although at first, there was some confusion over whether Ameer (Chief) should be from Ansaar or Muhajireen, but eventually Abu bakr (R.A) was given the power to have this great honor as no one was as close to the Messenger (PBUH) of Allah as he was.

First Person to Start Compilation Of The Holy Quran

During his Khilaafat (reign), Hazrat Abu bakr (R.A), by the advice of Hazrat Umar (R.A), began the very necessary act of accumulating Furqan e Hameed in one piece, so that the future generations of Muslims benefit from reading the holy Quran them in the right way.

Abu Bakr (R.A) died at the age of 63, exactly the age the Holy Prophet (PBHU) died at. He is buried very next to the Apostle (PBUH) of Allah.

So, to conclude, Hazrat Abu Bakr (R.A) was the noblest of all the companions of the Messenger (PBUH) of Allah SWT in terms of faith, truthfulness, honesty, and care for others, and many other qualities which were found in the Holy Prophet (PBUH). He spent his entire life in the service of Islam and always tried to be a better Muslim. May Allah Almighty give us all the desire to know and get inspiration from Hazrat Abu Bakr (R.A) in order to improve our lives! Aameen!