Perhaps the greatest threat that Islam faces at present is of saving its face value, which is being deteriorated and devastated because of its being affiliated with terrorism. At present Islam has become synonymous with terrorism and those who know something about Islam, that something is only the terrorist and aggressive image of Islam. 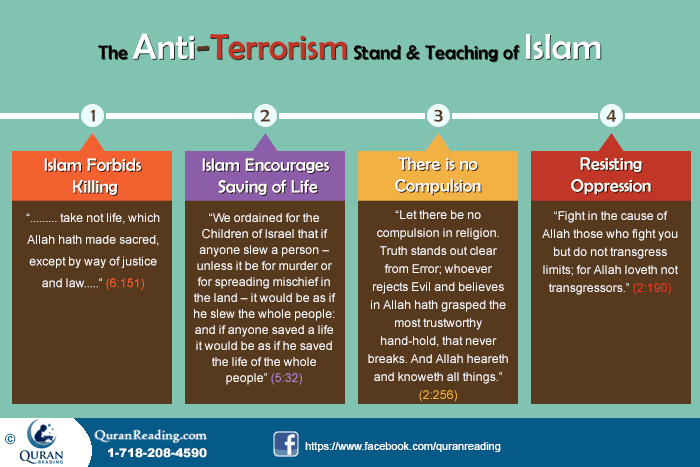 Islam not at all is in favour of terrorism and nor does it encourage any kind of hostility and aggression. The primary focus of Islam is to preach peace, forgiveness and tolerance to its followers and any kind of aggressive reaction or behaviour is detested in Islam until and unless it is unavoidable and justly executed.

The contemporary impression of Islam is that it is a religion, which teaches its followers to be aggressive and take any means necessary to spread Islam, especially reliance on terrorism and bloodshed related activities. The lines below discuss how this image of Islam is mere propagation and how the true preaching of Islam contradict and refute this image.

From this ayah it is clear that Allah Almighty straight away forbids any kind of killing. Thus, the impression that Islam encourages killing of innocents in general and killing of targeted people in particular is wrong and life is sacred in Islam. One may ask the question that in this ayah although Allah forbids killing but He says that killing is allowed by justice and law so how is it different from general killing? The answer to this is that all the countries in the world have death penalties that serve the purpose of justice in the society. Therefore, killing of people done under this motive and objective is nothing strange or odd, rather it is one of the core elements of the justice system and it needs to be implemented and observed in order to avoid transgression in terms of bloodshed in the society.

At another place in Quran Allah Almighty says:

This ayah perhaps gives the best value that Islam gives to human life. As per this ayah, killing of one life is equal to killing of the whole of the people or in the whole of humanity and saving of one life is equal to saving the whole of humanity. Therefore, every logical mind then thinks that if a religion gives this much value to life then how can it encourage or support terrorism? The answer is the same that it is all a misinterpretation of the ayahs of Quran by a specific group of people while the rest of the work is done by Western media that presents Muslims as terrorists. Therefore, those who understand the true meaning of Quran would testify to the fact that Islam values life greatly and does not commend taking of it unless for the cause that the person would cause mischief in the land or to equate murder. Hence, if a religion values a single life to the extent that makes it equal and representative of whole of humanity then that religion surely cannot preach taking of the lives of innocent and spreading bloodshed for material gains.

There Is No Compulsion:

The apparent reason behind the association of terrorism on Islam is that people think that Muslims resort to force as a means of spreading their religion. People think that Muslims have a simple rule whereby they convert others to Islam with the threat of life. This impression is also wrong as Islam does not encourage the use of force for its spread, rather it encourages spreading of Islam with the help of character and by preaching it to others in the simplest and politest manner. In Quran Allah Almighty says:

“Let there be no compulsion in religion. Truth stands out clear from Error; whoever rejects Evil and believes in Allah hath grasped the most trustworthy hand-hold, that never breaks. And Allah heareth and knoweth all things.” (2:256)

The first part of this ayah clearly reveals that there is no compulsion in religion. Meaning that a Muslim cannot force any other person to convert to Islam and neither can he or she resort to coercion as a means of spreading Islam, rather it needs to be done with politeness and patience. Moreover, in the second part of the ayah Allah Almighty clearly states that the truth stands out clear from evil and error, therefore, all a Muslim can do is preach Islam to others and then it is on the other whether he or she is able to differentiate truth from error and accept it. Therefore, if there is no compulsion in religion then there is no reason left for using aggression or resorting to terrorism as a means of spreading Islam. The only reason when a Muslim can resort to aggression is in defense, which is discussed in the lines below.

The only situation in which Islam allows fighting and resorting to hostility is in case of protection and defense of one’s self as well as the Muslim ummah. A Muslim is can only go for fighting or resorting to the use of force when the same thing is done against him or her, however, that resistance is to be done whilst staying in the limits and no transgression is allowed.  In Quran Allah says:

From the ayah it is clear that a Muslim is only to fight people who fight him or her, however, this fighting should also have its limits and justice should be maintained in aggression as well. Other than that fighting is not recommended to a Muslim. Moreover, in addition to the right of defending one’s self and taking revenge, Islam prefers and supports forgiveness and patience. Prophet Muhammad (PBUH) said in His hadith:

“Do not be people without minds of your own, saying that if others treat you well you will treat them well, and that if they do wrong you will do wrong to them. Instead, accustom yourselves to do good if people do good and not do wrong (even) if they do evil.” (Tirmidhi)

Thus, if such are the preaching of the leader of the religion then there should be no doubt in the mind of a person that Islam in anyway teaches, supports or encourages aggression or the heinous actions of terrorism.

In a nutshell, Islam is a religion of peace and love. The terrorism made synonymous with it is due to unguided and lack of understanding of Quran on part of some Muslims and the biased propagation of Western media. Islam at its core is peace and love, it never encourages terrorism and greatly values human life and its sanctity.