It is a common practice among human beings to help one another, mostly in the case if they are being mutually benefited, like coalitions among nations are majorly on the basis of some shared value. Speaking specifically, relationships between two persons in a society are also affected by joint respect and needs, e.g. no one generally helps someone else only because of some kind of interaction, until or unless it is being given some kind of esteem or it receives something in return. That is how the world works.

On the other hands, the system of connection between Allah and His slave is free of any such considerations near the Almighty, Who gives away His blessings without the need of being given anything in return. The return is only one way, and that too is possible by only remembrance of the Gracious God.

“One day I was behind the Prophet (PBUH) and he said to me, Young man! I shall teach you some words (of advice): Be mindful of Allah, and Allah will protect you. Be mindful of Allah, and you will find Him in front of you. If you ask, ask Allah; if you seek help, seek help from Allah. Know that if the nation were to gather to benefit you with anything, it would only benefit you with something that Allah has already prescribed for you, and that if they gather to harm you with anything, they would only harm you with something Allah has already prescribed for you. The pen has been lifted and the pages have dried.” (Tirmidhi)

Ibn Abbas was only 13 year old, when enlightened with such wisdom by the Holy Prophet (PBUH), who later became one of the early Quran scholars, and was well known for his critical interpretation of the Holy Quran. On one hand, this Hadith indicates about teaching the youth right from a very young age about key Islamic instructions so that they would become productive Muslims in the future. 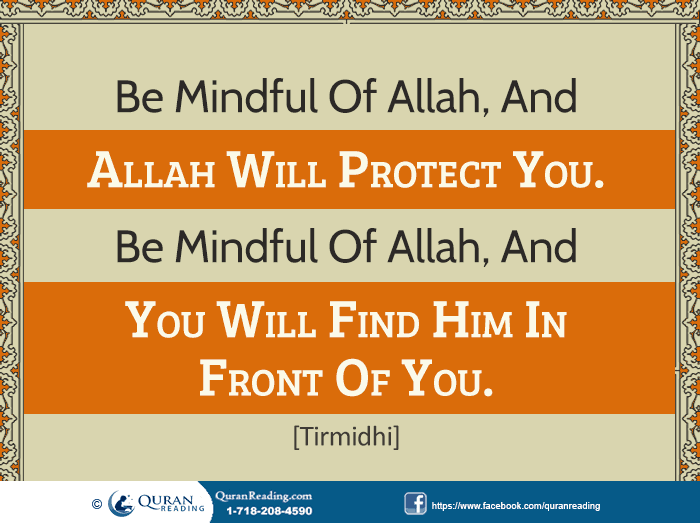 And on the other, it tells about the obedience of Allah SWT, which we will try to elaborate in the following description:

The strong sense of faith in the Oneness of the Almighty needs to be accompanied by working for building and fortifying the connection with Him. Majority of us Muslims take this belief as a guarantee to be true believers, when actually it asks for constant remembrance of Allah SWT for being able to receive His safety and guidance. While on the other hand, unfortunately, we strive to cling on to our worldly relationships with a hope to take something in return from our associations, who would only remember us in good times and forget us in bad times. But, Allah considers all His disciples alike and relieves them in tough period. Some of the ways to nurturing this link with the Glorious One are to fulfilling religious matters like offering Salah (prayers) five times a day, supplicating in front of Him, understanding of the Holy Quran, fasting, and giving Zakah (alms) to poor etc.

“And when My servants ask you, [O Muhammad], concerning Me – indeed I am near. I respond to the invocation of the supplicant when he calls upon Me. So let them respond to Me [by obedience] and believe in Me that they may be [rightly] guided.” [Quran, 2: 186]

So, when we try to reinforce our relationship with Allah, He always steps forward and responds to our plea. The greater implication of this matter is that one should never ask anyone`s help but only from the Exalted One, for this is the foremost criterion for being able to get closer to the Almighty, and He never forgives Shirk (considering someone as partner with Allah).

Relying On His Preset Destiny

As the saying of Hazrat Muhammad (PBUH) under discussion clearly indicates towards the fact that no one can ever help us more than what the Great Lord has already stipulated for us, nor someone could do any damage to us, no matter how hard they try, it won`t hurt us more than what the Almighty has predetermined for us. Hazrat Ibrahim (A.S) too had same belief, which is why He opted not to take Jibrael`s (A.S) help, for He knew that Allah would help him eventually, and fire had no effect on him with the Help of Allah. So, there is need to be become agitated in any case, and one should set itself free by taking the Will of the Mighty God as final and decisive

It means if we are tested with hardships, it must have great repercussion in our future life, and one should remain steadfast in such instances to be able to get the greater rewards of the Gracious Lord as a result of one`s forbearance.

Fearing, yet Expecting Mercy From Allah

The inference of “Being Mindful of Allah” could be taken in terms of being aware of the presence of the Ultimate Power that holds the whole universe together and Knows everything we do. After having established this sense of faith in the Almighty, when one works righteously and avoids from committing wrongdoings because of fear of punishment of Allah, it should also be followed with a strong belief in the compassion of the Exalted One. Because He does not only penalizes His people on distracting from the right path, but He is even more Pardoning and Generous.

So, being wary of the most Powerful`s penalty and clemency, we should not only keep away from transgression from the Islamic instructions, but we should also remain optimist and take help from this conviction by asking Him for amnesty on our past sins.

In short, being mindful of Allah includes more than just having self-belief in His Greatness, but it should also be followed by His constant memory to benefit from this relationship, believing in His fixed providence for us, being patient in hardships and praying to Him, and last but not the least, being frightful of His wrath, nonetheless always trust in His compassion, which are some of the ways to get closer to Allah SWT.