The Holy Quran is the 4th and final Sacred Book of Allah SWT, which He revealed on His Last Messenger, Hazrat Muhammad ﷺ. It is ultimate source of guidance for believers in the Religion of Islam. It consists of many sections which address religious and secular issues concerning life. Although, all the revelations of this Blessed Manuscript serve as a means of enlightenment, but some of its chapters are considered more significant than others because of some particular reasons. Surah Al-Fatiha is one of those few episodes of Quran, which holds special status, and is even recalled by Allah Almighty in these words:

The above mentioned Ayah shows that God, the Exalted has regarded this Surah so high that it is mentioned along with the rest of the entire Quranic revelations. The phrase “Seven of the often repeated verses” also describes the great importance of this chapter, as it is the essential part of Daily Prayers and has to be recited every day. 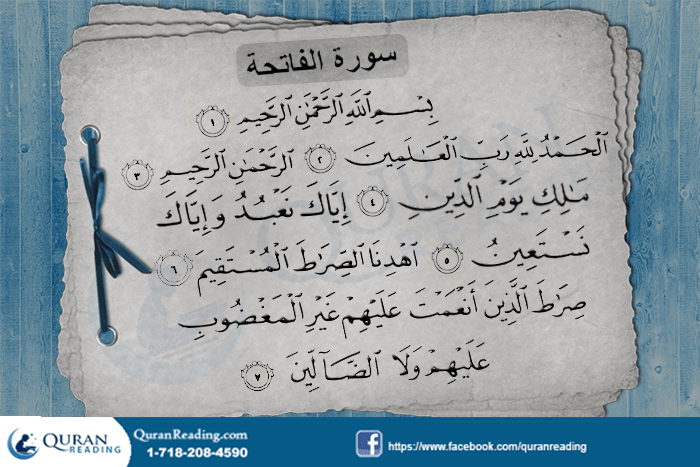 It is the Makki Surah of the Holy Quran, which means that it was discovered on the Apostle ﷺ of God while He was in Makkah, i.e. before migration to Madina. It was initially the 5th chapter to be disclosed but after Furqan e Hameed was assembled together, it was put at the beginning. Al-Fatiha itself means “The Opening” as this chapter comes right at the start of the Holy Book and serves as a Gateway to read Quran Majeed further. Moreover, it also serves as the starting of Salah. It also has the honor of being the very first Surah that is made known completely. Although it consists of 7 Ayats only, but it still explains the Veneration of the Almighty in a very comprehensive fashion and also is a great means of supplication of asking Allah for keeping one on the right path.

This chapter of Furqan e Hameed has so many great implications accumulated in it that it is known by more than one or two names. Some of the secondary identities of Surah Fatiha are:

Hence, it indeed is the Mother of Quran as Rasulullah ﷺ Himself has given it that name. Moreover, the Arabs used to name anything that summarizes anything well or consists of the most important part of some matter as Umm or Mother.

2.   Sab’ul-Mathani (The Seven Oft Repeated Verses): It is also named so because its seven verses are regularly recited at the start of every rakaah of the prayer.

3.   Al-Hamd (Praises to Allah): It is also named Al-Hamd, the Commendation, as it contains the Adoration of the Almighty Lord.

4.   As-Salah (The Prayer): It is named as the Entreaty because its reading is a requirement for the legality of the daily prayers.

5.   Ash-Shifa (The Cure): Abu Sa’id reported that the Messenger ﷺ of Allah said:

“The Opening of the Book is a cure to every poison.” (Ad-Darimi)

6.   Ar-Ruqyah (the Spiritual Cure): Abu Sa’id reported that after he had recited it to cure a person who had been bitten by a scorpion, the Apostle ﷺ of God asked him,

“…And what made you to know that it was a ruqya.” (Bukhari)

That is why it is highly advised to recite Surah Fatiha and for the sick ones.

7.   Asas al-Quran (the Basis of Quran): It is known by this name as Surah Fatiha contains the most essential fundamental teachings of Islam, i.e. Admiration of One Allah SWT.

It is the only Chapter of the Holy Quran that has got the reputation of being an indispensable part of Namaz, which is to be recited regularly in every Rakah of Salah.

“Whoever does not recite Surat Al-Fatihah in his prayer, his prayer is invalid. (Bukhari)

It means that without reading these seven verses of the Sacred Scripture, one`s prayer is considered void, and it does not count.

Some of the greatest qualities that this chapter of Furqan e Hameed contains are:

i)       Being The Greatest Surah of The Holy Quran

It is considered as the most influential chapter of the Hallowed Volume of God Almighty, as it consists of the almost the complete essence of the Islamic faith, i.e. Believing and Admiring the Exalted One, and asking Him only for gaining rectitude in life.

The above stated Hadith shows that the Holy Prophet ﷺ has called this Surah as the Utmost section of the Holy Quran.

ii)       Resulting in Answering Of One`s Prayer By Allah SWT

Surah Al-Fatiha is a great form of supplication to the Almighty God. There are some recitations like sending Durood e Pak on Rasulullah ﷺ, which result in acceptance of entreaty at once. Umm ul-Quran is also such narration that leads towards getting the attention of Allah SWT while praying to Him:

It means that Surah Al-Fatiha is a very special kind of appeal to the Gracious God, which causes Him to answer His servant on every step of this recital.

“While the Messenger ﷺ of Allah was sitting with Jibril he heard a creaking sound above him. Jibril looked up and said, “This is [the sound of] a gate that has been opened in heaven today and has never been previously opened.” Then an Angel descended through it and came to the Prophet ﷺ and said, ‘Rejoice in the good news of two lights that have been given to you such as no Prophet before you has been given. [They are] Surah Al-Fatihah and the concluding [two] verses of Surah Al-Baqarah. You will never recite a word from them without being given the blessings they contain.’ “

It shows that Surah Al-Fatiha, among the last two Ayats of Surah Baqarah is the great source of enlightenment that Allah SWT has only given to the Ummah (Followers) of Rasulullah ﷺ,  which has the greatest effect in the attainment of Allah`s favors.

“Should I not inform you of the most noble and excellent part of the Quran?” He then recited “All praise and thanks are due to Allah, the Lord of the Worlds” (An Nisai)

It means that Surah Al-Fatiha is the most outstanding section of Furqan e Hameed, which contains the best form of Islamic teachings in concise form.

In short, Surah Al-Fatiha is not any normal chapter of the Holy Quran, rather it is the fundamental part of the Religion of Peace, being essential segment of Salah, without which it is not acceptable, containing the Veneration of God in most desirable manner, and last but not least, it serves as a great purpose of asking the Almighty for granting one attainment of the right path.