After Ramadan, the first 10 days of dhul hajjah last month of the Islamic calendar, becomes even more fortunate because Muslims perform hajj during this holy month. Also, the month of Dhul Hajjah is the month of Hajj, which means pilgrimage as well. 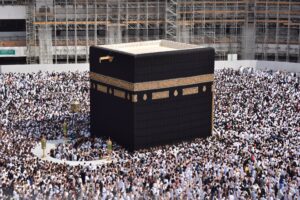 Also, This month is so lucky because of its first ten days, marking the start of a period of benefits, rewards, and significance. Individuals performing the Hajj believe that these days are beneficial for the same reasons that those who are not.

The Significance of first 10 days of Dhul Hajjah

As per, Prophet Muhammad (PBUH), good deeds are more appreciated by Allah on first10 days of dhul hajjah than on any other day.

Also, As there are no days in the year that Allah SWT loves more than the first ten days of Dhul-Hijjah and the last ten nights of Ramadan since they combine acts of devotion in a way that no other time of year does.

“In these days, a single fast is like a year’s worth of fasting, and a single night of devotion is like worshipping on the Night of Power (Lailatul-Qadr). (Tirmidhi)”.

How to Maximize Virtues of Dhul Hajjah

The below actions and the associated benefits are highly recommended for Muslims during the first 10 days of dhul hajjah.

Intensify your prayers, make Dua (a type of petition), and specifically pray for those who have passed away, as they are awaiting the gifts that you give them in a pack of prayers. and engage in spiritual contemplation during this time.

‘When a person dies, his deeds come to an end except for three: Sadaqah Jariyah, knowledge from which benefit is gained, or a righteous child who prays for him. [Muslim]

The next step is to increase your Sadaqa (voluntary charity). There are additional blessings to giving Sadqa in this holy month of Dhul Hajj. Therefore, take advantage of this chance to donate to charity for the sake of Allah.

Seven hundred times as much money will be given to everyone who exhibits exceptional conduct throughout this time period. Isn’t it possible to give Allah 10 dollars in exchange for seven thousand dollars?

Muslims should fast during the first ten days of the month of Dhul Hijjah, which starts on the 1st and ends on the 10th of the following month. As long as a Muslim is able to complete these ten days of fasting, Allah will treat them as if they had fasted for a whole year.

“All the deeds of the son of Adam are for him, except fasting, which is for Me and I shall reward for it.” [Bukhari]

365-day abstinence from eating and drinking is akin to receiving this honor. As a reward for fasting for nine days, known as “the ninth” or “the day of Arafat,” Muslims will get twice as much money as if they had fasted for two years.  The Prophet (saw) said:

“There is no day on which Allah frees more people from the Fire than on the day of ‘Arafah.” (Muslim)

This is because the Day of Arafah is considered to be the most sacred day of the year.

Many of us are still unaware of the significance of first 10 days of dhul hajjah. To understand the exact reason why this month is so close to Allah, we have to read Quran Pak thoroughly. Read the Hazrat Ibrahim’s (R.A) story about his dream and sacrifice.

6. Give A Prophetic Qurbani:

Muslims sacrifice animals on the 10th of Dhul Hajj to become closer to Allah and to express their devotion to Allah by recalling the sunnah of Ibrahim (THE PROPHET). Our beloved Prophet Muhammad (SAW) said in the hadith:

“When any of you intends to sacrifice the animal and enter the month of Dhul Hajj, he should not get his hair cut or nails pared until he has offered his sacrifice.” (Muslim)

Background: When Hazrat Ibrahim (The PROPHET) had a dream that he should have slaughtered his son for the sake of Allah, he did not hesitate and got ready to sacrifice his son. Allah’s intention was not to take Abraham’s son, but rather to test his Iman and love for Him (Allah).

Allah is always waiting for his slaves who approaches him and begs forgiveness for his sins.

When a person expresses regret for his sins and offers dua for repentance, Allah Tallah paved the door for him to receive his blessing. So we should stop our evil activities and ask Allah’s forgiveness in these first 10 days of dhul hajjah, and be certain that we will never repeat such deeds again.

“Seek forgiveness of your Lord and repent to Him, [and] He will let you enjoy a good provision for a specified term and give every doer of favor his favor”. [The Noble Qur’an, 11:3]

The first 10 days of dhul hajjah  are a time of plenty in virtues and benefits. As the last month of the Islamic calendar, No one can predict who will still be here a year from now during the same month as we are now with confidence. As a consequence of this, we feel driven to dedicate ourselves totally and joyously to remembering Allah right now. This is a direct result of the circumstances.