Hazrat Umar Ibn-Al-Khattab was one of the most powerful and influential Muslim caliphs. He belonged to Banu Adi family tribe of Quraish in Makah. He was the second Caliph after Hazrat Abu Bakar (R.A) and senior companion of Prophet Muhammad (SAW). If you look back in the history of Islam the people who played a great role in spreading Islam the one prominent name comes in your mind will be of Hazrat Umar (R.A).

Here we will are going to describe the biography of Hazrat Umar (R.A) in this article. There are lots a lot of things which can describe him and can learn about his early life, bravery, acceptance of Islam, caliphate period and much more. You can get all these information from our Hazrat Umar (R.A) – 2017 application which is available for andrioid and iPhone devices, get it for free for your device.

He was born in 583 A.C in Banu Adi family a tribe of Quraish in Makah. He was non-Muslim in the start and by occupation, he was a businessman. Before accepting Islam; Umar (R.A) was one of the most extreme enemies of Muhammad (SAW).

Hazrat Umar (R.A) was one of the educated people in Quraish family in that period of time when only a few people were literate and could read & write. He also got familiar with the art and science of genetics and knew the history of the Arabia. He was very brave; Umar (R.A) was a well-known famous wrestler, debater, and a spirited person in his youth time. He was also famous for his flawless horse-riding skills. He was an intelligent person and a renowned public speaker and successful ambassador of Quraish. 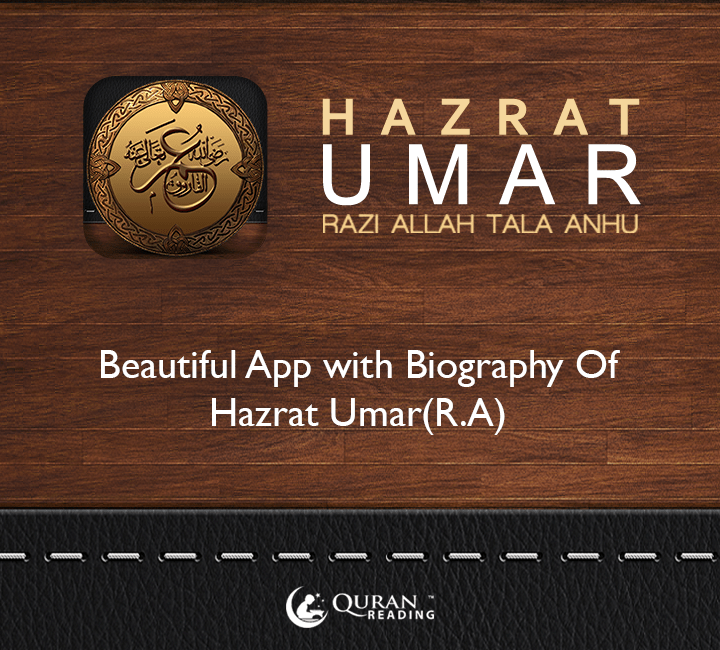 He opposed Islam and threatened to kill the Hazrat Muhammad (SAWW). When he was on his way to execute his plan to kill Holy Prophet (SAWW), he came to know about his sister and brother in law of embracing Islam. He went to his sister, Fatima`s house where her sister and his brother in law were being taught Quran by Khabab (R.A). He inquired about their acceptance of Islam and start quarreling with them. He slapped his sister in a way that she bled richly, after seeing his sister bleeding he calmed down out of the guilt and asked her sister to show me the pages where Quran is written. He recited the Quran after taking bath; it was the beginning of Surah Ta Ha. Finally, he came to the verse:

“Indeed, I am Allah. There is no deity except Me, so worship Me and establish prayer for My remembrance.” Quran [20:14]

He was greatly moved by the Holy verses after reading and approved them as the words of Allah. On hearing this Hazrat Khabbab (R.A), who had hidden in the house, came out from inside and said, “O Umar! Pleasing information for you. It seems that the prayer of the Muhammad (SAW) which he said last night has been answered in your favor. He prayed to Allah: “O Allah, strengthen Islam with either Umar b Khattab or Abu Jahl, whomsoever Thou pleased”. 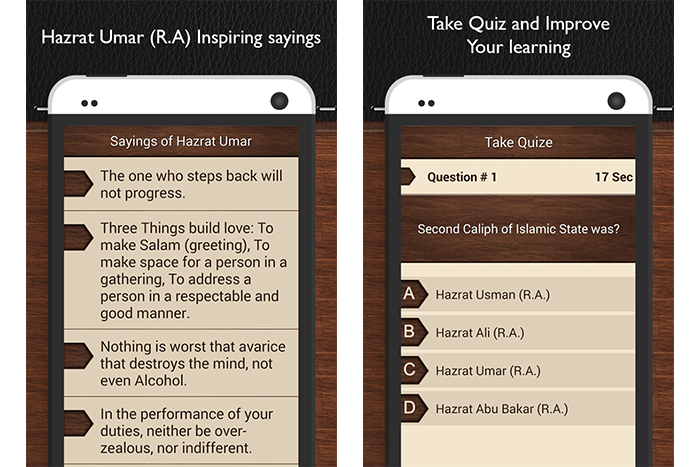 Muslims were not able to offer Salah publicly due to fear of chiefs of Quraish. But when Hazrat Umar (R.A) accepted Islam and came in the circle of Islam believers came openly as they knew no one has dared to face Umar (R.A). He was the one who first suggested the Holy Prophet (SAW) that they should perform Salah in the Holy Kaaba, where the Messenger of Allah for the first time led the Muslim prayer. Due to such fearless proposal of Hazrat Umar (R.A), he was given the title of Al-Farooq by Hazrat Muhammad (SAW), which means “the one who distinguishes between the right and the wrong”.

After the death of Hazrat Muhammad (SAW) Umar (R.A) was in deep sorrow at that time Hazrat Abu Bakar (R.A) consoled him. At that time a dispute arose that who would take the responsibility after the death of Prophet Muhammad (SAW) then Umar (R.A) addressed Muslims about great character of Hazrat Abu Bakar (R.A) relating his closeness to Prophet Muhammad (SAW) and suggested to make him the first caliph of Islam. After the death of Hazrat Abu Bakar (R.A) Hazrat Umar (R.A) took the responsibility and became the second Caliph. He followed the footsteps of Muhammad (SAW) to the fullest extent. It was Hazrat Umar under whose rule Islam became an international power and the mighty empires of Persia and Byzantine collapse before the army of Islam. Within ten years of his glorious rule, the whole of the Persian Empire, Syria, Palestine, Egypt and a part of Turkey came under the banner of Islam and the nations entered the layer of Islam.

He was not only a defeated but also an excellent administrator who originated an efficient system of administration, Hence he was the real founder of a political system of Islam. He imposed Divine Law) as the code of a newly formed International Islamic State; he safeguarded the internal safety by introducing the police force: he gave stipends to the poor; he constructed headquarters and forts for the safety of Islamic armies; he founded new cities for the growth of Islamic culture and civilization; he improved agriculture and economics of the Islamic State; he founded the educational system in an Islamic State; in brief he was the founder of a great Islamic State. 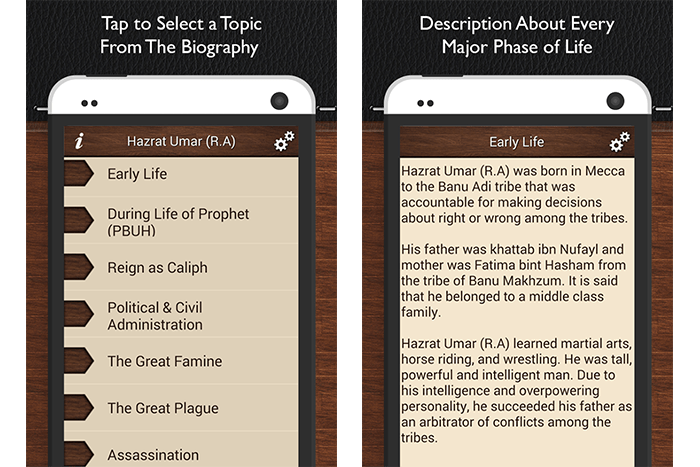 In short, Hazrat Umar (RA) is the role model for every Muslim. He was an embodiment of justice, principles, piety, humility, and character. He performed all his roles whether personal or professional with intensity and not a single example can be put forward which shows that he performed his role less than perfect.

If you are interested to get a detailed EBook about the life of Hazrat Umar Ibn e Khtaab (R.A), you can download our app featuring the full biography of him. Download Hazrat Umar (R.A) App for your Smartphone.