Salah is the major form of worship that a Muslim offers five times a day regularly. It is an obligation upon a Muslim and a Muslim is to offer no excuse when it comes to offering Salah. The offering of Salah in addition to representing the submission of Muslims to their Lord also has other benefits as well which are highly cherished by every Muslim.

The establishment of Salah is one of the major topics upon which Quran has emphasized more than anything else. In Quran Allah Almighty has stressed upon Muslims to learn to offer Salah regularly and with mentions of offering Salah Allah has also mentioned its benefits with it as well. The lines below give the major benefits of Salah that elaborate the importance of Salah. 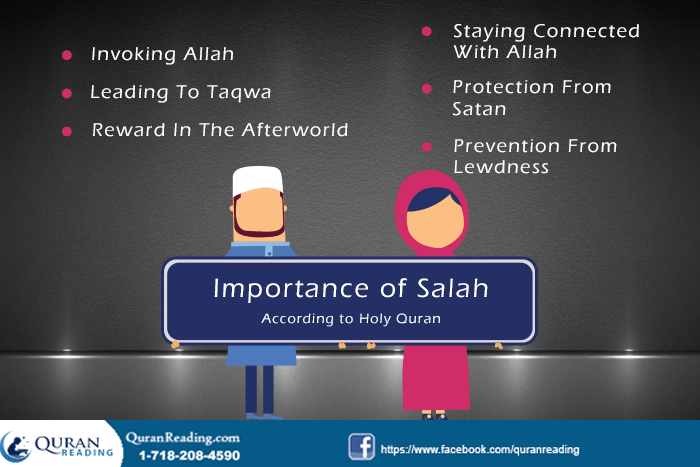 Although there is no constraint upon a Muslim on how to invoke Allah Almighty, however, prayer is the preferred means of doing so as when a person worships Allah he or she develops a connection with Allah and any invocation within that or after that connection is bound to be accepted by Allah more compared to invocation done in any other circumstance. In Quran, Allah Almighty says:

“O you who have believed, seek help through patience and prayer. Indeed, Allah is with the patient.” (2:153)

Therefore, a Muslim must use prayers as a means of invocation and ask Allah Almighty for help and assistance in any difficulty or worry.

Piety or righteousness is the prime objective which a Muslim has to achieve in this life. All the instructions, constraints, freedom, rights and education provided by Islam are with the objective that a Muslim becomes pious and moves on the righteous path. In this regard, prayer has a great role to play as it promotes Taqwa or piety in the follower. In Quran, Allah Almighty says:

“This is the Book in which there is no doubt, a guidance for those who have Taqwa: who believe in the unseen, and who establish Salah, and spend out of what we have provided for them.” (2:2-3)

Therefore, in addition to giving charity and believing in the unseen, a Muslim must also establish Salah in order to move towards Taqwa.

Reward In The Afterworld:

Every deed, whether good or bad that a Muslim undertakes in this life, he or she will have to be answerable for it in the afterlife. Although all the deeds get rewarded in the afterlife, however, the actual reward of Salah will truly be realized in the afterlife when Allah Almighty will shower special blessings on that person. In Quran, Allah says:

“Indeed, those who believe and do righteous deeds and establish prayer and give zakah will have their reward with their Lord, and there will be no fear concerning them, nor will they grieve.” (2:277)

Therefore, prayer is not something that ends in this world, rather the real reward of it will come to surface in the afterlife.

Muslims who realize that Allah Almighty is their Lord and the Giver of everything, they try to develop a relation with Him and wish to stay connected with Him as much as possible so that their relation grows strong. Salah can effectively help in achieving so, as Allah says in Quran:

And when you have completed the prayer, remember Allah standing, sitting, or [lying] on your sides. But when you become secure, re-establish [regular] prayer. Indeed, prayer has been decreed upon the believers a decree of specified times. (4:103)

Therefore, performing prayers is a means of developing a connection with Allah Almighty and when a Muslim does so five times a day, then the consequent relationship is to naturally grow strong.

Satan is an open enemy of believers and all what he tries is to make people go stray from the path of righteousness and go down in the path of oblivion and darkness. Satan tries to tempt a person in all the possible ways and when a person once listens to him, he gradually lures him or her down further into the pit of darkness. Therefore, seeking protection from Satan is also imperative for a Muslim. In Quran Allah Almighty says:

Satan only wants to cause between you animosity and hatred through intoxicants and gambling and to avert you from the remembrance of Allah and from prayer. So will you not desist? (5:91)

Therefore, not offering prayer is actually falling into the prey of Satan, whereas those who try to offer and establish prayer are actually resisting his temptation and when these temptations are resisted for long the result is one not falling prey to Satan ever again on any forefront.

In life, a Muslim gets exposed to all sorts of environments and people, all of which have a direct impact on the personality of the person. There is no denying the fact that the current plight of the people of the world is miserable where they are more prone towards ills and lewdness compared to goodness, thus if a Muslim starts being like other people, he or she goes down the road of darkness. Thus, in order to prevent one’s self from all the lewdness that is common in the world of today, a Muslim must find refuge in Salah as it will help in combating lewdness, as Allah says in Quran:

Recite, [O Muhammad], what has been revealed to you of the Book and establish prayer. Indeed, prayer prohibits immorality and wrongdoing, and the remembrance of Allah is greater. And Allah knows that which you do. (29:45)

Therefore, a Muslim must consider Salah as an effective weapon when it comes to fighting lewdness and evils of all sorts.

In a nutshell, those who learn and read Quran on regular basis are familiar with the importance of Salah and how strongly has Allah Almighty emphasized on it and explained its importance to the people in Quran. A Muslim must realize that above anything, Salah is an obligation and every Muslim has to fulfill his or her obligation.