At present, there are numerous labels of negative connotations being associated with Islam. People all over the world fail to understand that culture and Islam are different in the Muslim population and the different acts which Muslims at present undertake because of their social or cultural constraints have nothing to do with Islam.

Although Islam in itself has the best culture, but Muslims at present have culture different from Islam but the west considers their culture as an Islamic culture. This notion is wrong and has nothing but biased bad name to Islam. One of such cultural phenomenon that has been defaming Islam is the act of honor-killing. 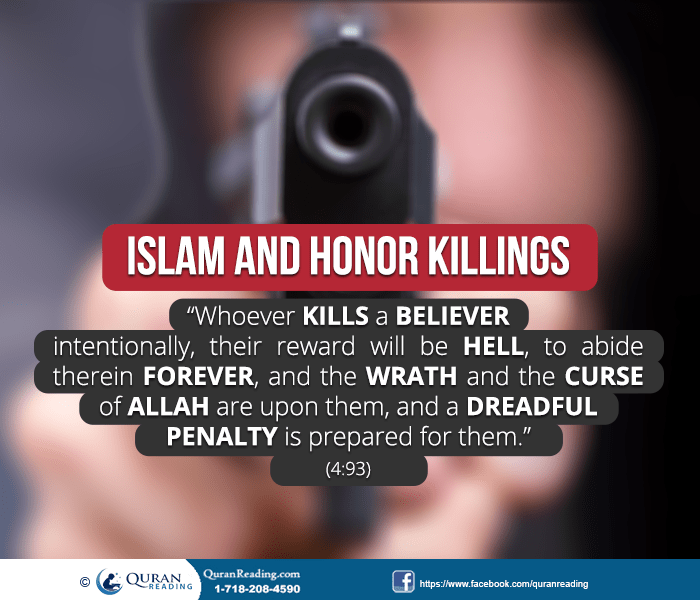 All over the Muslim world there are people who kill women just because of the suspicion or even a proved fact that the women has defamed them by committing adultery. Although there have been very few cases in which such an action has been proved, however, still the figure of honor killing remains high. One must understand that honor killing has nothing to do with Islam and it is purely an act that is against the teaching of Islam and has no roots in Islam whatsoever. The lines below discuss how Islam views killing in general and honor killing in particular.

“Whoever kills a believer intentionally, their reward will be Hell, to abide therein forever, and the wrath and the curse of Allah are upon them, and a dreadful penalty is prepared for them.” (4:93)

From this ayah of Quran it is obvious that there is no room for killing a believer in Islam. Whoever intentionally kills a believer, the only reward left for him or her is the life of hell in the hereafter. Therefore, intentional killing of a believer in Islam is one of the gravest sins that a person can commit.

Further to killing Islam discusses the sanctity of human life as well. In Islam human life is one of the most sacred things and a Muslim is to care for life of others and make sure that no life is lost. Allah Almighty says in Quran:

From this ayah of Quran it again becomes clear that human life is sacred. One cannot kill a human unless the person being killed is spreading mischief in the world or life for life. Other than that saving  a life is saving humanity and killing one is killing humanity.

The possible hadith that the illiterate and Muslims with lack of knowledge use to justify the act of honor killing is as follows where Prophet Muhammad (PBUH) explained the situations when shedding of blood is allowed by saying:

“It is not permissible to shed the blood of a Muslim who bears witness that there is no god but Allah and that I am the Messenger of Allah except in three cases: a life for a life (murder), zina of one who is previously married (adultery), and the one who changes his religion and forsakes the jamaa’ah.” (Bukhari)

From the ayah one can find that killing an adulterer who is married is allowed in Islam. This is the justification which the people have for honor killing in a Muslim society. However, they don’t realize the fact that this hadith gives a general concept and the scholars have further discussed the conditions in which it is allowed.  The conditions are two:

From the mentioned hadiths it is clear that the only killing allowed pertaining to defaming of honor is the killing of an adulterer who is or has been previously married. It means that killing of women who are not married is not allowed in Islam, moreover, the one thing that most people forget is that this rule and law is equally applicable on men as well. Moreover, if the woman is found guilty of the crime, even then an individual does not have any right to kill another person or woman in particular.

In a nutshell, there is no concept of honor killing in Islam. The only condition allowed is when adultery is done by a married person and the ruling is the same for both men and women without any discrimination. Therefore, the notion of killing unmarried women or killing women only in the name of honor killing is not Islamic at all.