It is the custom of the world that whoever invents something astonishing is praised and admired by the rest of the humankind. This mode of tribute is meant to admit the unparalleled intelligence and astuteness of the architect. Similarly, Allah SWT is the Creator of the entire universe and everything present in it also declare His Greatness as the Almighty Lord says in the Holy Quran:

And to Allah prostrates whatever is in the heavens and whatever is on the earth of creatures, and the angels [as well], and they are not arrogant. [Quran, 16: 49]

It means that every object made by the God, the Exalted, whether it is in heavens, space or on earth, demonstrates the act of humbleness in front of the Creator of the world of the worlds. It is also imperative to note that this mode of showing gratitude to the Most Merciful by His Creations is done in the form of prostration.

If each and every thing in the totality lies down in praise and humility to the Gracious God, then mankind, who are the smartest of all the formations, ought to realize this fact and become on level to the ground in front of Him. The Almighty Lord says in Furqan e Hameed:

Hence, Allah SWT directs all of us to be in a state of Sujood before Him, which is the most rightful and just way to illustrate the required level of gratitude and meekness to the Most Powerful. 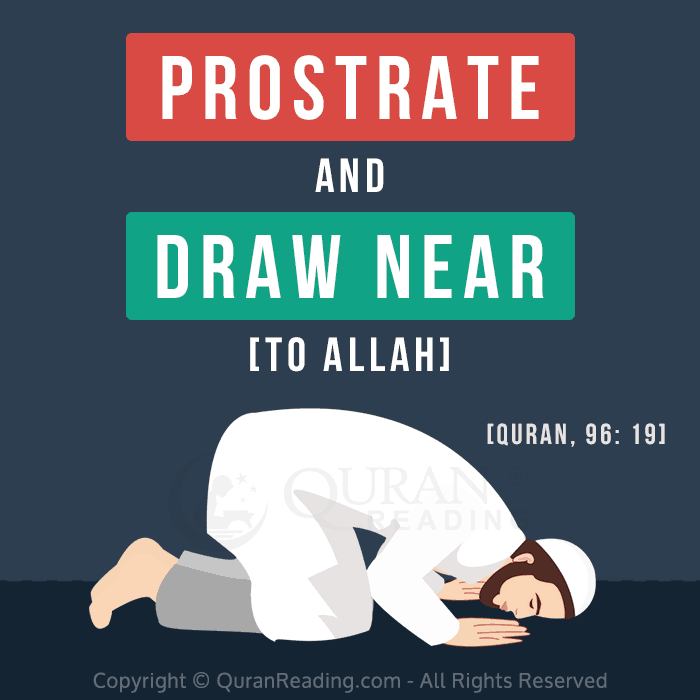 Meaning of Prostration In Islam

“Sajdah” is Arabic word, which means conducting prostration prior to the Almighty God in the direction of the Qibla (the Holy Kaaba) and is occasionally performed while offering the Obligatory and Nafl Prayers. During this condition, a Muslim Praises and Glorifies the Name of Allah, the Exalted by repeating the following phrase three times:

Translation: “Glory to my Lord the most High”

The above mentioned expression completes the true gist of being in the powerless situation in front of the Almighty Lord; therefore, it is not merely a state of lying down but actually is a complete form of Veneration of God.

According to the following Hadith narrated by Ibn Abbas (R.A), one comes to know about the actual manner of prostrating before Allah SWT:

“I have been ordered to prostrate on seven bones i.e. on the forehead along with the tip of the nose and the Prophet pointed towards his nose, both hands, both knees and the toes of both feet and not to gather the clothes or the hair.” (Bukhari and Muslim)

The seven bones that are discussed in this Saying of the Holy Prophet ﷺ are actually the forehead and tip of the nose combined, and a pair of hands, knees and feet each. It is also to be noted that while being in this state of modesty, one should also not worry about setting its clothes and hair right for this condition requires complete and utter submissiveness towards the Almighty, rather one should concentrate solely on its Namaz.

Since, this act is a great means of realization of the true Authority of Allah SWT; therefore, it also follows up with attainment of great gains which are spiritual in nature.

Some of the essential benefits of Prostration include:

Namaz itself the method of standing in front of God, having conversation with Him and asking for His Guidance and Mercy. The state of Sujood in Salah is the greatest means of getting closer to the Almighty, and helps in attaining His Pleasure:

The above mentioned Ayah indicates that Allah SWT Himself urges His servants and regards the act of Prostration as a great source of attaining nearness to Him.

Every Muslim knows that Salah brings about forgiveness of sins. The only action of Prostration in it benefits one even more than that.

“Prostrate much because there is no Muslim that prostrates to God except that God raises him one degree in Paradise by it and forgives for him a sin.” (Ahmad)

It means that with each and every Sajdah, Allah SWT raises one to the higher stage of the Paradise till one reaches in rank up to Jannatul Firdous (the Greatest Level in Heaven).

Most of the people regard the apparent mark on one`s forehead to be the sole result of Sujood, but that is not actually the case. The mark could be found on anyone`s face due to any other possible reason than just Salah and Sajdah. The Messenger ﷺ of God is narrated to have said:

“My Ummah on that day will surely have bright faces because of Sujood, and bright arms and feet because of ablution.” (Ahmad)

Thus, the real sign of one`s being distinguished will be evident on its face in the afterlife, which has been linked to Prostration by the Holy Prophet ﷺ.

Since, Sajdah brings one closer to the Almighty Lord, so, it acts as a means of unlocking great pleasures that one tends to get from its God. Rasulullah ﷺ said:

“Whoever humbles himself before Allah, Allah will elevate him.” (Muslim)

It means that the state of Prostration brings about elevation in one`s rank near Allah SWT and one gets to be recognized among the firm believers.

In short, Sujood is a highly revered and sacred act in the life of a Muslim, who greatly benefits from it by attaining closeness to Allah, attaining paradise and being among the true disciples of Islam.