In Islam Quran is the word of God, therefore, whenever there is guidance required, Muslims rely on it and consider it the ultimate Guide that would show them the right path and resolve their dilemma. The reason why Muslims no longer enjoy the glory in the world which they used to do is the fact that they have limited the use of Quran as a means of recitation for reward only and have left pondering over its meanings.

When Muslims learn Quran with understanding it changes them from inside out. Each and every verse of Quran is a pearl and that pearl is unique in every aspect. Thus, a reading of Quran with understanding is what is required from Muslims. Although every verse of Quran holds the same irrefutable and most respected place for a Muslim, however, there are few ayahs which if a person can understand truly, they can change his or her life. 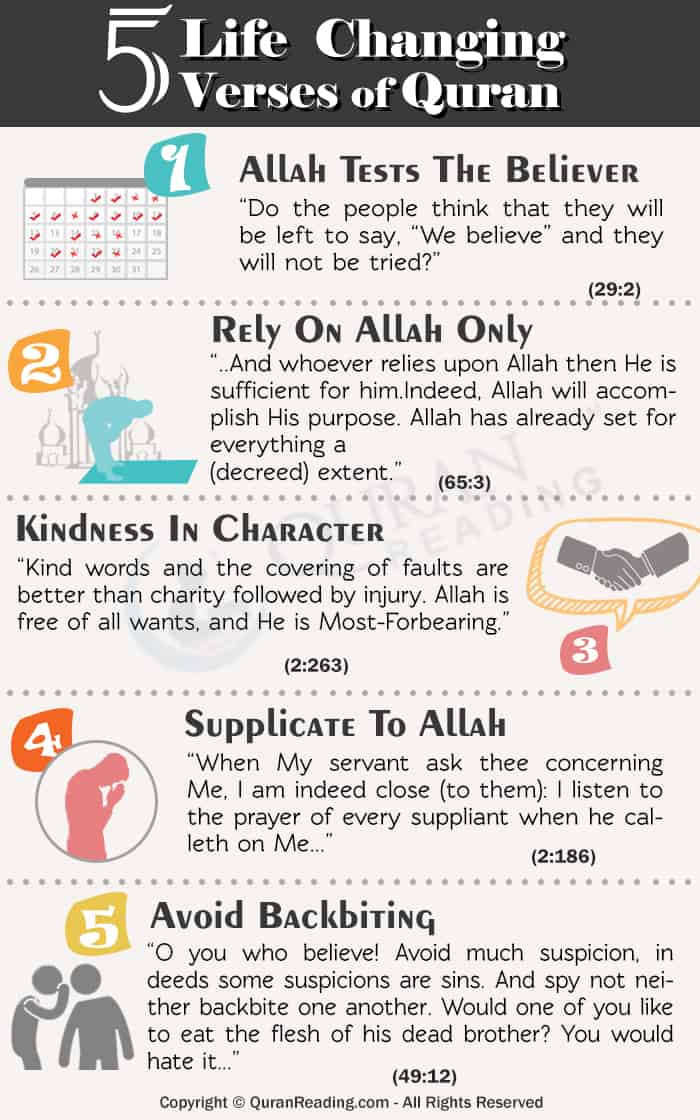 The lines below discuss 5 ayahs which if the contemporary Muslim understands, they can change his or her life and enable them to see the world from a different perspective.

Considering the situations of Muslims in the world in general and the difficulties that a practicing Muslims would go through in life every day, it becomes natural to question that We are supposed to be the believers, We are the blessed ones, We are on the path of righteousness, then how come we have such a plight? How come despite our belief in Allah we face hardships in life? Why are there troubles in our lives, whilst we do what Islam says? The answer to this can be found in the following Ayah where Allah Almighty says:

The ayah makes it clear that accepting Islam or being a believer and proclaiming faith does not mean that a Muslim has gained some kind of a card that frees him or her from all kinds of troubles, trials and difficulties. Rather, Allah Almighty tests the believers. The purpose behind testing the Muslims is to check the kind of faith they have in Allah. It is in the times of despair we tend to reject whatever we believe in and go on the path of darkness, thus, the existence of trials is to differentiate the ones who believe in Allah and have true faith from those who simply proclaim Islam by tongue and their heart has doubts. A contemporary Muslim should realize that Allah has not abandoned them, rather all the difficulties they are facing in life will end and it is all a test of their Faith in Allah.

Rely On Allah Only:

Another problem which Muslims in general and people in particular face is the disappointment they face when seeking help from others. It has become a habit of people of today that we associate certain needs with certain people and when people fail to fulfill our expectations, we get disappointed in life in general and from the people in particular. A Muslim needs to realize that people are nothing but mere puppets and the greater authority rests with Allah who can change the heart of people and turn the conditions in the favor of a person. An ayah that can strengthen the believe of a Muslim in this regard and make him or her change life in the light of it is as follows:

“….And whoever relies upon Allah – then He is sufficient for him. Indeed, Allah will accomplish His purpose. Allah has already set for everything a (decreed) extent.” (65:3)

It means that those who rely on Allah for the resolution of their problems and the fulfillment of their needs have their problems solved and needs fulfilled. There is no better an ally than Allah Almighty, therefore, it is natural and perhaps the most logical thing to rely on Allah only. This does not means that a Muslim should leave everything on Allah and not strive for anything in life, rather, a Muslim should strive as humanly possible, but when it comes to the efforts bearing fruit, ones should not rely on some other person for the fruit, rather expect the reward from Allah. And those who rely on Him surely get their reward and He never disserts those who rely on Him.

Although the focus of the life of a Muslim should be to move towards Allah, but it does not mean that human contacts or the importance of humans in life should be undermined in anyway. Allah can forgive whatever rights a person has towards Him, however, the rights of other humans on a person are something which only they can forgive and Allah will hold a person accountable for not fulfilling those rights. Therefore, if a religion focuses this much on human relations, it is imperative that those relations be based on kindness and mutual love and care. The common practice is that people forget the human rights and keep on performing other personal or individual deeds that ought to bring them reward. People with such an approach in life should consider the following Ayah of Quran as an eye opener:

“Kind words and the covering of faults are better than charity followed by injury. Allah is free of all wants, and He is Most-Forbearing.” (2:263)

A Muslims should be kind towards others. In addition to fulfilling the individual religious obligations, a Muslim must take care of the people around him or her and make sure that whatever rights they have are also fulfilled.

Some of the Muslims are under the impression that they believe in Allah, fulfill their obligations and do not do anything against Islam and they have all what they want in life therefore, it is sufficient enough for them and they do not need to supplicate excessively to Allah. this approach is wrong, supplication more than anything shows the submission of a Muslim to Allah, which is something which a Muslim should express in every condition in life. In this regard the ayah that a Muslim should keep in mind is:

“When My servant ask thee concerning Me, I am indeed close (to them): I listen to the prayer of every suppliant when he calleth on Me: Let them also with a will, Listen to My call, and believe in Me: That they may walk in the right way.” (2:186)

“O you who believe! Avoid much suspicion, in deeds some suspicions are sins. And spy not neither backbite one another. Would one of you like to eat the flesh of his dead brother? You would hate it. And fear Allah, verily, Allah is the One Who accepts repentance.” (49:12)

Talking about people behind their back has become an everyday activity. The ayah tells of the severity of the act and a Muslim should realize it is a heinous act. There is no permission for backbiting even when the thing said about the absent person is true. Therefore, Islam encourages concealment of the faults of others and a Muslim is not to backbite other people.

In the light of these ayah if a Muslim starts relying on Allah, calls Him regularly, shows kindness towards others, avoid backbiting and understands that whatever troubles come in life are a test from Allah, then his or her life will surely change for better in all the respects and from all the perspectives.