Arrogance or Pride is the blamable characteristic of a person that Allah Almighty disliked the most. Arrogance is the feature of Iblees and his followers in this world. We all know that the first one who showed arrogance towards Allah (SWT) and His creation was the Iblees. When Allah Almighty commanded Iblees to prostrate to Adam he refused to do so and was arrogant, and said, “I am better than him (Adam), You created me from fire, and him You created from clay.”

Allah Almighty said in Noble Quran about the greatest sin arrogance (pride) in these words: “[To them] it will be said, “Enter the gates of Hell to abide eternally therein, and wretched is the residence of the arrogant” (Quran, 39:72). According to the Holy Quran arrogance (pride) is the sin that will be severely punished by Allah Almighty. Our beloved Prophet Muhammad (SAW) said that pride is the disease which is the greatest sin in the sight of Allah Almighty; one who is proud is arrogant. People who are arrogant will not enter paradise. Prophet (SAW) said, “One will not enter Paradise if one has an atom’s weight of arrogance in his/her heart.” (Tirmidhi) 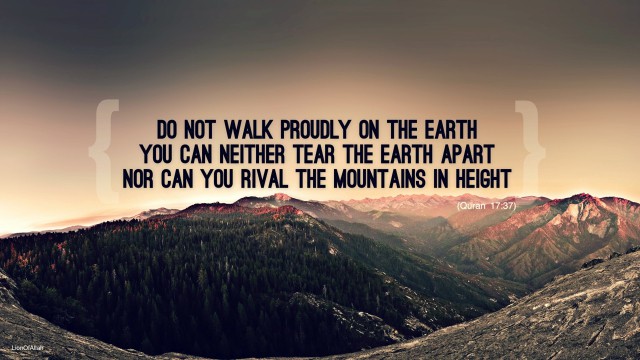 Arrogance or pride is when an individual thinks too deeply about himself, and when he tends, moreover, to consider others as inferior to him, that is arrogance or pride. On the contrary, when one thinks of himself as small and insignificant is known to be modest and this characteristic is called modesty. When someone considers others as superior to himself that is called humility. Allah loves those who possess these great qualities and disliked those who in any case have the arrogance. In Noble Quran, Allah Almighty said: “… truly He likes not the proud” (Quran, 16:23).  Pride or arrogance is disliked the most because it is a thick veil which hides one’s shortcomings from his own view, and thus prevents him from removing them and attaining perfection.

Arrogance leads people to the sickness of mind and incorrect behavior. People who live in a state of pride and betrayal reside in a dark internal world. A world full of a sincere dread of losing, making a mistake, being humiliated, stress, doubt, hatred, anger, and passion. Arrogant people’s behavior is always expected to make them appear more valuable and superior in the eyes of other people in other words they feel superior from others. Allah Almighty turns the arrogant people away from being guided with his signs. For those people Allah Almighty says in Holy Quran: “I will turn away from My Ayahs (verses of the Quran) those who behave arrogantly on the earth, without a right, and (even) if they see all the Ayahs (proofs, evidence, verses, lessons signs, revelations, etc.), they will not believe in them…” (Quran; 7:146)

The most severe arrogance is being arrogant against Allah Almighty by rejecting submission and worshipping Him. Allah Almighty says about these arrogant people in Holy Quran, “Verily! Those who disdain My worship (because of arrogance), they will surely enter Hell in humiliation!” (Quran, 40:60). The person who is arrogant or pride likes that people should stand up for him, whether on his coming or while he is sitting, does not like that anyone should sit or walk beside him. An arrogant people live in a constant state of discomfort due to which they never find peace in life. When pride finds its way into the hearts of Muslims, it quickly affects the way one talk, act and treats others.

May Allah Almighty keep us all away from this disease of arrogance and pride! Ameen