Muslims believe in death and eternal life which comes after death. For leading a good life what actions and qualities are desirable, what impact will be in our hereafter life due to our actions and deeds in this life, we should know about the concept of heaven and hell. We Muslims believe on Judgment Day after that Allah Almighty will decide on the basis of individual deeds where to send in Jannah or Jahannam.

Allah Almighty described Heaven in Holy Quran: “Is the description of Paradise, which the righteous are promised, wherein are rivers of water unaltered, rivers of milk the taste of which never changes, rivers of wine delicious to those who drink, and rivers of purified honey, in which they will have all [kinds of] fruits and forgiveness from their Lord” (Quran, 47:15). From this verse of Holy Quran, we can describe heaven in these words as paradise is like a garden in which there are beautiful women, flowing cups and juicy fruits, rivers of water, milk, wine and rivers of clear honey.

Prophet Muhammad (SAW) described Jannah when He (SAW) visited heaven in these words: “I came upon a river (in Paradise) the banks of which were made of tents of hollow pearls. I asked Jibrael, “What is this (river)?” He replied, “This is the Kauthar” (Bukhari). 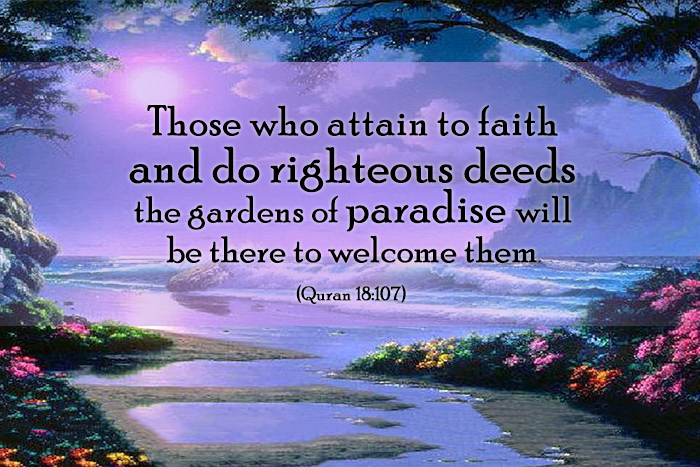 Heaven in the Holy Quran

Throughout our lives, we compete to believe and serve Allah Almighty so that we can gain Jannah in the hereafter. We can just imagine how paradise will be look alike. Only Allah Almighty knows it but He (SWT) describes it for us in Holy Quran.

The concept of Hell in Islam

Those who are wrongdoers and disbelievers will definitely go to Hell or Jahannam. We should also know about the hell and what people will enter into the hell. Those who don’t believe in Allah Almighty and religion Islam will surely go to Jahannam but also those who believe in Islam and Allah Almighty but doing bad deeds will also get punished for their actions. Allah Almighty says in Holy Quran: “Our Lord! Surely, whom You admit to the Fire, indeed You have disgraced him, and never will the wrongdoers find any helpers.” (Quran 3:192)

Accepting the reality of Jannah and Jahannam is one of the basic six beliefs of religion Islam. Hell is the place for sinners after the death on Judgment Day. In Holy Quran, the word “Jahannam” and also “Al-Naar” is mentioned the most. Allah (SWT) says in Holy Quran about the hell in these words: “God’s kindled fire, which reaches up to the hearts: it is closed in over them in long columns” (Quran 104:5-9)

Holy Quran also mentions who will enter hell. For sure disbelievers in Lord and especially if they die in that state of, hypocrites, idolaters, the arrogant, those who treat religion as a pastime, have broken the treaty, made fun of Allah’s Messengers or on the reality of Day of Judgment. Also, murderers, ones misappropriating inheritance especially of orphans, slandering chaste women or claiming divinity for themselves on their own will reside in hell.

At most of the places where Hell is mentioned, the beauty and peace of Heaven are also mentioned to show the contrast between them. So Muslims are obligated to pray five times a day and ask forgiveness and protection from hell fire in each prayer from Allah Almighty.