The end of the Holy month of Ramadan is marked by the auspicious occasion of Eid-ul-Fitr. It is one of the most celebrated occasions that are awaited by Muslims throughout the year. With the beginning of the month of Ramadan, Muslims start eying the end of it, which would come with the amenities, and celebrations of Eid.

QuranReading.com wishes you all a very happy and blessed Eid. May the blessings of Allah, fill your life with Love, Joy, and Prosperity.

During the whole month of Ramadan in which Muslims fast, the festival of Eid comes as a reward for them during which they make special eating, wearing and celebratory arrangements. It is one of the greatest gifts of Allah that Muslims could enjoy. The lines below discuss the auspicious nature of Eid-ul-Fitr along with the way in which the Eid-ul-Fitr prayer is to be offered. 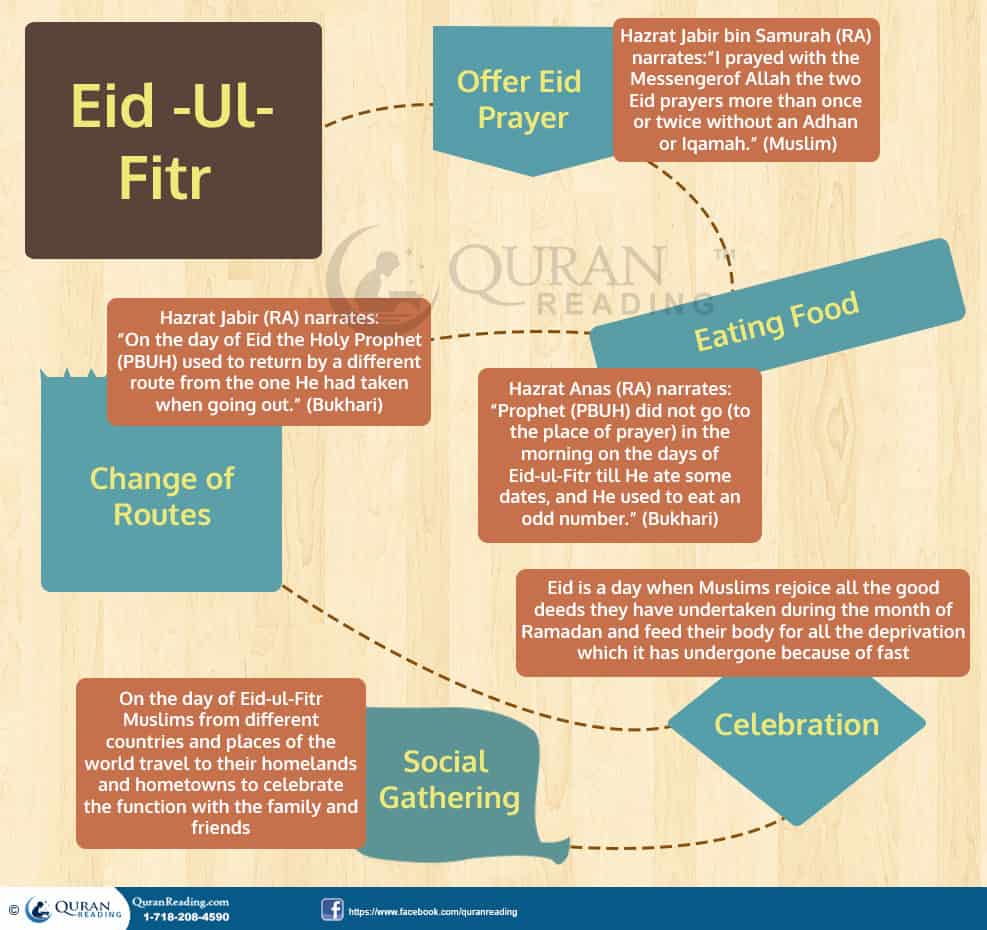 The Gift From Allah:

The festival of Eid-ul-Fitr is not something, which Muslims have fabricated, or created on their own, neither is it celebrated in commemoration or rememberance of someone. Rather it is a festival that is a special gift of Allah for Muslims. The hadith pertaining to it is narrated by Hazrat Anas (RA) in the following manner:

“Holy Prophet came to Madinah, the people had two days in which they used to entertain and amuse themselves. He asked: “What are these two days?” They said: “We used to amuse ourselves and take pleasure in these two days during the Days of Ignorance (jahiliyyah). The Messenger of Allah said, “Allah has substituted for you something better than these two; the Eid of Adha  (sacrifice) and the Eid of Fitr .”  [Sunan Abi Dawood]

From this hadith it is clear that the function or festival of Eid is a blessing from Allah Almighty so that Muslims could rejoice and celebrate during the days of Eid. Therefore, if there is an occasion which Muslim can make specific for rejoicing, celebrating and merry making, it is the day of Eid-ul-Fitr and Eid-ul-Adha.

Eid Prayer – The renowned Sunnah of Prophet Muhammad (PBUH) pertaining to the day of Eid-ul-Fitr is the offering of Eid prayer. Pertaining to this, Hazrat Jabir bin Samurah narrates:

“I prayed with the Messenger of Allah the two Eid prayers more than once or twice3, without an Adhan or Iqamah.” (Muslim)

From this narration it is clear that offering the prayer of Eid was an act which Prophet (PBUH) specially performed during the Eid-ul-fitr day.

Eating Food – The preparation and eating of variety of foods in general and sweets in particular is something that is also representative of the day of Eid-ul-Fitr. Hazrat Anas (RA) narrates:

“Prophet (PBUH) did not go (to the place of prayer) in the morning on the days of Eid-ul-Fitr till he ate some dates, and he used to eat an odd number.” (Bukhari)

Therefore, before going for the Eid-ul-Fitr prayer a Muslim must consider eating something before going to the prayer. In another narration, Hazrat Buraidah (RA) says:

Therefore, on the day of Eid-ul-Fitr a Muslim must ensure that before going to offer prayer he eats something first.

Change of Routes – On the day of Eid-ul-Fitr before going to offer prayer, Prophet (PBUH) would go from one route and come back from the other. This is mentioned in the narration of Hazrat Jabir (RA) where He said:

“On the day of Eid the Holy Prophet (PBUH) used to return by a different route from the one he had taken when going out.” (Bukhari)

Thus, on the day of Eid a Muslim must take different routes so that he can meet and greet as much people possible and spread love.

Besides the fact that Eid-ul-Fitr is a blessing of Allah Almighty, the festival of Eid also holds importance in other areas of life, especially in the social perspective. Some of the major elements that make Eid-ul-Fitr important are discussed below.

Eid-ul-Fitr comes after the month of Ramadan during which a Muslim after fasting and excessive prayer and worship requires joy so that he or she could celebrate all the deeds they have done on the path of righteousness. Therefore, Eid is a day when Muslims rejoice all the good deeds they have undertaken during the month of Ramadan and feed their body for all the deprivation which it has undergone because of fasting for thirty days. However, Eid day does not mean Muslims are free from their regular prayers and other obligations. Therefore, all other duties and obligations on Eid ul Fitr must be done accordingly.

On the day of Eid-ul-Fitr Muslims from different countries and places of the world travel to their homelands and hometowns to celebrate the function with the family and friends. Moreover, it is during the festival of Eid that family friends meet with each other thus the members of different families interact with each other. Hence, above everything else, Eid-ul-Fitr holds great social importance as it allows social gathering at least once a year for those who do not interact or meet with each other all year long.

It is a custom across different Muslim cultures across the globe that Muslims share and exchange gifts with each other on the day of Eid-ul-Fitr. This exchanging of gifts besides its superficial implications also symbolizes the sharing of love and joy with each other, which ultimately leads to greater love and respect for each other. Thus, the celebration of Eid and the gift exchange that takes place during it actually helps bring people close to each other.

On the day of Eid-ul-Fitr, Muslims keep all their tensions and conflicts aside and greet each other with love and joy. On this day Muslims forgive each other for all of the previous mistakes and by forgiving all that they hug each other and give their relation a fresh start that is based on love and brotherhood with no ulterior motives.

Eid-ul-Fitr is different from the regular obligatory prayers and it has an additional method of offering. The lines below give the major steps involved in offering Eid-ul-Fitr prayer.

In short, Eid-ul-Fitr is one of most auspicious occasions that is awaited by Muslims all over the world. This festival is a blessing of Allah Almighty and the purpose of it is to help Muslims come close to each other, spread joy and love to all the people that come in contact with a Muslim.