The most read book throughout the world, The Holy Quran, is the last book of Allah (SWT) carrying the message of mercy, forgiveness and peace for all mankind. The Holy Quran was revealed more than 1400 years ago to the last messenger of Allah, Prophet Muhammad (PBUH) as the final word to call the mankind towards the creator and share the truth about the universe with humankind. The message in Quran shows us the way to spend our lives in accordance to the guidelines provided by Allah and to follow the teachings of the Prophet Muhammad (PBUH). Reciting Quran reveals many treasures of wisdom hidden in the Holy Book which draw us closer to believe in oneness of God and the message of Islam.

Quran is a miracle of Allah. During the recital of Quran, you will get a very strong feeling that the verses are directed towards you and you are being taught the code of life by the divine power Himself. The Quran shares an intimate feeling and Allah talks to His creatures directly. Another miracle of Quran is its preservation through centuries. Today, the Quran Aayahs we recite are the same that were revealed to the Prophet Muhammad (PBUH). This is only possible due to the divine intervention of Allah (SWT) as He has taken the responsibility of its protection Himself. 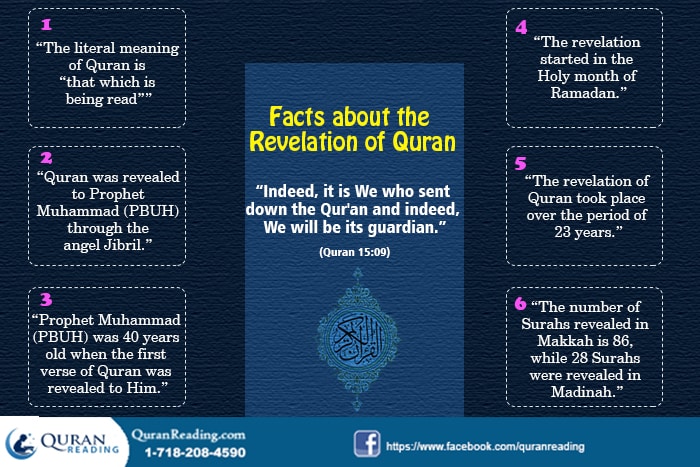 Allah has safeguarded the verses of Quran from pollution by making it easy to be read and memorized. Today, it is the only book which is memorized, word by word, by millions of Muslims. Allah explains this quality of Quran in following verses,

“And We have certainly made the Qur’an easy for remembrance, so is there any who will remember?”

There are countless facts about the Quran and its revelation some of which are shared over here:

Some other facts about the Quran are:

When you open up Quran and start reciting it, you’ll find many gems and inspirations that no one else could have found. It’s like being directly guided by a light source. The knowledge found in the Holy Quran is indisputable. The scientific facts revealed in Quran have been proven true and no one can refute the divine wisdom behind the verses of Quran. The stories of prior Prophets and religions have also been proven true.

Try to learn the holy Quran and inculcate the habit of reading it daily to witness these miracles yourself. There are many online resources that you can consult for understanding Quran and learning it with complete translation and meaning, one of them being QuranReading.com. Start today to make your life part of a miracle. Learn the facts about Quran and increase your faith.