Man is a social animal and to live and survive in life, humans have to interact and rely on each other. This is the reason why humans have the gift of being born with relationship and throughout their lives they go for new relationships or try getting rid of the ones that don’t contribute positively to their lives. One of such relationships that humans value greatly is friendship. 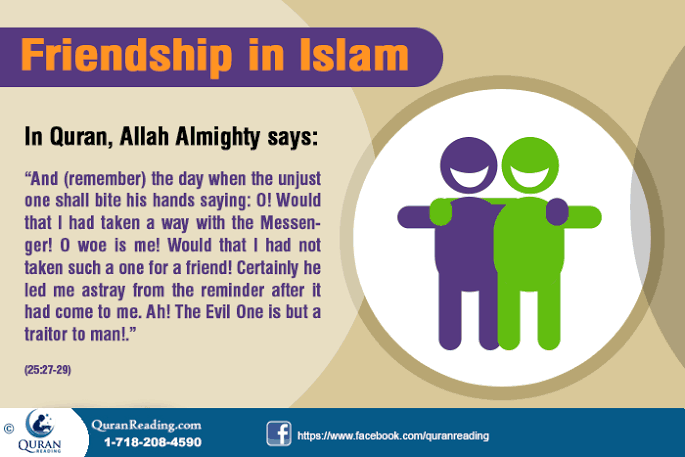 Friends are an integral and important part of life as they contribute heavily in what a person makes of his or her life. This is the reason why Islam also speaks about friendship. Islam acknowledges the importance of friends in one’s life, therefore, it emphasizes on the selection of right friends. The lines below discuss the importance of friends in the light of Islam and what different criterions should a Muslim follow pertaining to the matter of making friends.

“And (remember) the day when the unjust one shall bite his hands saying: O! Would that I had taken a way with the Messenger! O woe is me! Would that I had not taken such a one for a friend! Certainly he led me astray from the reminder after it had come to me. Ah! The Evil One is but a traitor to man!.” (25:27-29)

There are a variety of things that become clear from this ayah of Quran. The first thing that becomes clear is the fact that Allah Almighty acknowledges friendship as a factor that is important to the life of a person. Therefore, making friends is not something alien or out of Islam, rather friends are acknowledged as a relationship in Islam. The second thing that becomes clear from this verse is the fact that the kind of friend that one has have a great role to play in what a person gets in the life hereafter. Those who get paradise will definitely have their friends as their partners because they all contributed in the life each other and followed the path of righteousness. On the other hand, the ones who receive hell as a reward of their deeds will complain about their friends and lament upon the fact that it is following their unrighteous friends that has resulted in this plight of theirs, therefore, it is imperative that a Muslim has righteous friends.

Pertaining to the righteous friends, Allah Almighty says in Quran:

Regarding the kind of people a Muslim must try to be friend with, in Quran Allah Almighty tells a few of their traits:

“And (as for) the believing men and the believing women, they are guardians of each other; they enjoin good and forbid evil and keep up prayer and pay the poor-rate, and obey Allah and His Messenger; (as for) these, Allah will show mercy to them; surely Allah is Mighty, Wise.” (9:71)

From this ayah of Quran, it is clear that the believing men who fulfill all the obligations incumbent upon them are the ones who are on the path of righteousness and who live under the shadow of blessings and mercy of Allah Almighty. Therefore, if a Muslim is to make friends, then the righteous person should be made friends who fulfill all the obligations of Islam and follow the instructions of Allah Almighty and the Sunnah of Prophet Muhammad (PBUH) in every aspect of their life.

Pertaining to the people that a Muslim needs to avoid as friends, Allah Almighty says in Quran:

“The hypocritical men and the hypocritical women are all alike; they enjoin evil and forbid good and withhold their hands; they have forsaken Allah, so He has forsake them; surely the hypocrites are the transgressors.” (9:67)

From this ayah of Quran, it is clear that the people who are evil are the ones who are hypocrites. The hypocrites enjoin in evil and they forget Allah and the instructions He has imposed. Thus, such are the people who a sane Muslim should never befriend, as their friendship only leads to tyranny and evil.

The question then arises is that how can a person identify whether the other person which he or she wants to make a friend is hypocrite? The answer to this is given in the hadith of Prophet Muhammad (PBUH) in the following way:

“The signs of the hypocrite are three: when he speaks he lies, when he promises he breaks his promise and when he is entrusted he betrays the trust.” (Muslim)

This hadith clearly gives the three factors which a Muslim must consider pertaining to weighing whether a person is worthy of friendship or not. The factors are as follows:

Liar – The first factor that a Muslim must consider in the personality of a person whom he or she wants to make friend is the truthfulness of the person. If a person is a liar, then he or she must not be considered as a friend, as such a person can deceive you anytime in life by lying to you which can then result in great loss.

Breaks Promise – The second thing to consider in the personality of a person before proceeding with friendship is the commitment of the person. A hypocrite breaks promise and never keeps them, which is a thing that a sane person never wants from a true friend. Hence, when considering someone for friendship, one must go for the ones who fulfill their promises and value their commitments.

Betrays Trust- The third sign of a hypocrite is that he or she betrays trust when entrusted with anything. For being friends, the primary criterion is trust, therefore, if someone voids that criteria, he or she should not be considered for friendship.