The origin of Islamic faith goes back to the early 7th century, when Allah SWT selected Hazrat Muhammad ﷺ as his Last Messenger. When the Holy Prophet ﷺ announced about the first Quranic Revelation and that He is the Final Apostle of the Almighty Lord, the Qureyshi idolaters and polytheists denied Him. They became worst enemies of whoever accepted Islam and tortured them both physically and mentally. This eventually led to mass emigration of Muslims from Makkah to Madina with the permission of God, the Exalted.

The Muhajireen (emigrants of Makkah) left most of their belongings behind them, which were eventually taken by the Qureyshi disbelievers. In the second year of Hijrah (Migration), in 623 A.D, Muslims came to know of Qureyshi caravan coming back from Syria to Makkah. So, they thought of avenging their losses of possessions in Makkah by raiding that convoy lead by Abu Sufyan, who called for his people to protect his caravan from Muslims and crush them. The Apostle ﷺ of Allah had no plan of going into battle, but when He came to know about arrival of thousands of armed disbelievers for purpose of demolishing Muslims, they eventually had to go into first battle between them and the infidels. This clash is known as Ghazwa (battle in which the Prophet ﷺ took part in Himself) Badr, which occurred on 17th of Ramadan and was won by Muslims who were 313 in number only, against the mighty army of above 1000 Makkan disbelievers. Allah SWT talks about this emphatic victory of Muslims over infidels in the Holy Quran as:

“Already there has been for you a sign in the two armies which met – one fighting in the cause of Allah and another of disbelievers. They saw them [to be] twice their [own] number by [their] eyesight. But Allah supports with His victory whom He wills. Indeed in that is a lesson for those of vision.” [Quran, 3: 13]

The account of the happenings during this heroic clash of Madinans (Believers) with the Makkans (Non Believers) is described below: 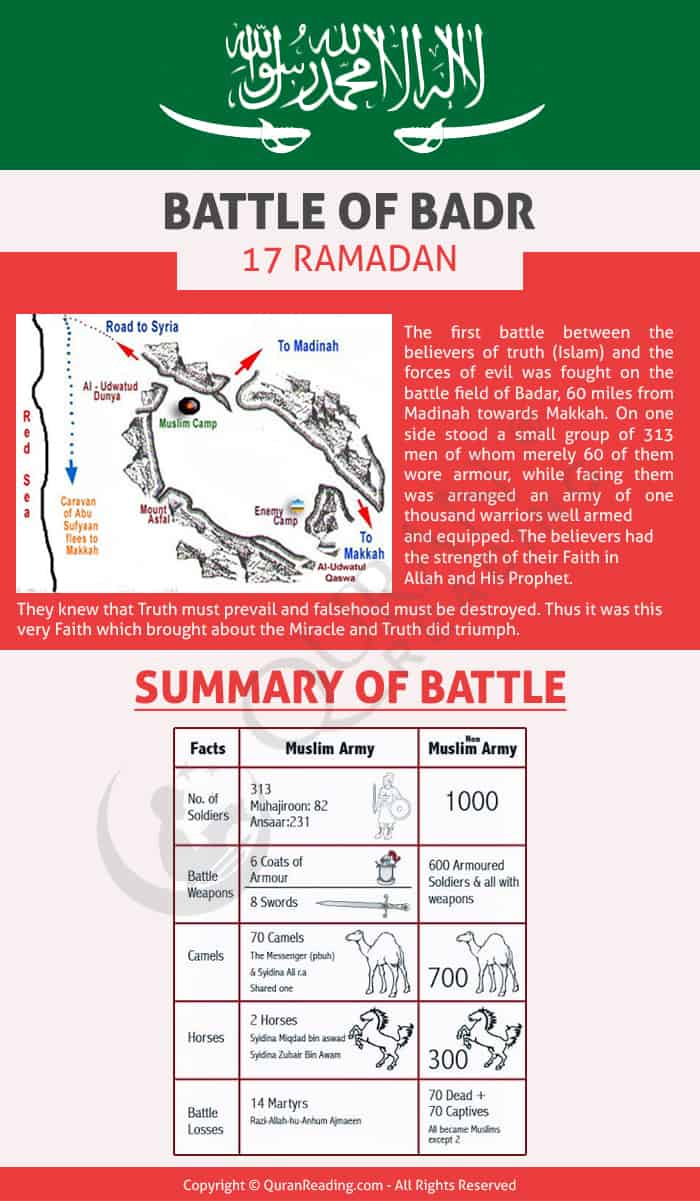 Preparation For The Decisive Encounter

When the Holy Prophet ﷺ came to know about the powerful preparation of the disbelievers against Muslims, He had no choice but to arrange a strong group of believers to fight against them. It was a great testing time for the faith of the disciples of Islam. The Ansaar (Natives of Madina) also had to make a decision whether to take part in this combat or not, as the Pact of Brotherhood between them and Muhajireen did not include fighting enemies outside the boundaries of Madina. The Messenger ﷺ of God asked his companions about it, Muhajireen approved their inclusion straight away, but as they were very less in number, Rasulullah ﷺ asked them 3 times until S’ad b. Mu’ad realized that He (PBUH) was wishing Ansaar to participate too. He stood up and told the Holy Prophet ﷺ that Ansaar were always ready to fight in the way of Allah and His Apostle (PBUH) at any cost. Rasulullah ﷺ was ecstatic at this great sight of Muslim unity and standing firm against the enemies of Allah. In the end, a small defense force of 313 Muslims; most of them were unarmed and had only 70 camels and two horses, was ready to face the disbelievers.

Acceptance Of The Prophet`s (PBUH) Entreaty

The idolaters of Makkah, under the command of Abu Jahl marched towards Madina. When Muslims came to know about it, they also moved out of the city and stationed at the wells of Badr near a sea between the two cities, where both armies collided in the end. Before the start of battle, the Holy Prophet ﷺ prayed to the Almighty Lord that this small amount of Muslims may not be destroyed, for there would be no one else left to take His Name till the Day of Judgment on the surface of the earth. Allah SWT accepted request of His Messenger, and later said in the Holy Quran:

“[Remember] when you asked help of your Lord, and He answered you, “Indeed, I will reinforce you with a thousand from the angels, following one another. [Quran, 8: 9]

The above mentioned Ayah clearly indicates towards the Help of Allah SWT in the form of good news of thousand Angels assisting Muslims during their fight against non believers who were triple their number. The prayer of Rasulullah ﷺ itself shows His great trust and faith in Allah Almighty`s Assistance.

Clash At The Site of Badr

Muslims were 1/3rd in figure as compared to the infidels. When both the armies faced each other at the place of Badr, the battle began with the normal Arab Tradition of a fight, with nominated warriors from each side coming into clash with each other.

A triplet of disbelievers namely: Utbah Ibn Rabi-ah, his son Al Walid and his brother Sheibah (all belonging to the Ummaya Family) came in front of the Makkan army, and asked the Prophet ﷺ to send His men of equal strength and caliber to fight them. Every Mo`min was ready to come forward and was wishing to be called by the Apostle ﷺ of God to fight the idolaters, but Rasulullah ﷺ chose to start the combat with His own family. So, He selected His own Son in Law, Hazrat Ali (R.A), His uncle, Hazrat Hamza (R.A) and one of His close companions, Hazrat Ubayda (R.A). The first two had great wins over their opponents, while the Last One got martyred in the end. After the general battle started, valor of Hazrat Ali (R.A) was highly prominent, who horrified and killed his rivals with great bravery. The Holy Prophet ﷺ took a handful of soil and threw it in the air towards the faces of the idolaters. This caused them to tremble and they turned their backs, thereupon, Muslims took them with great power, killed 70 of them and took 70 as prisoners, who were treated with great humility and kindness. The Almighty narrates this happening in Furqan e Hameed as:

In this Quranic verse, the Creator of the world of the worlds indicates towards His Assistance when only a mere handful of soil thrown by the Prophet ﷺ resulted in Muslim victory. Allah SWT made it clear to the Muslims that their victory was made possible due to His Power and Support.

In short, the battle of Badr proved as a foundation of Muslim strength as they were quite a few in numbers, who were given the eventual victory against the mighty and well armed disbelievers of Qureysh.