Health is one of the utmost magnificent graces of Allah Almighty bestowed, which is subset of the abundant donations and venerable bounties upon Humankind. Bearing safe and sound health is a great possession which along innumerable favors of Lord are hard to refute. Muslims around the globe are the cultural distributers but religion Islam imparts its nutritional practices, predominately determined by sacramental narrations, Sunnah of Muhammad (PBUH) outlined by Divine Quran and documented by Islamic Jurisprudence. Hadith narrates that:

“There are two favors that many people are prejudiced by it: The health and the leisure.” [Bukhari]

Cheerishing the sublime bounties of Allah the Exalted deity, correlate with the humbleness of thanksgiving in return. Islam the acceptable religion provides ways to attain gazillions of virtues from every single act when done in pursuit of prescribed Sunnah. Eating food, drinking are intertwined with one’s daily routine eventually this mundane exercise can turn into act of worship if follow the enlightened Quran teachings. 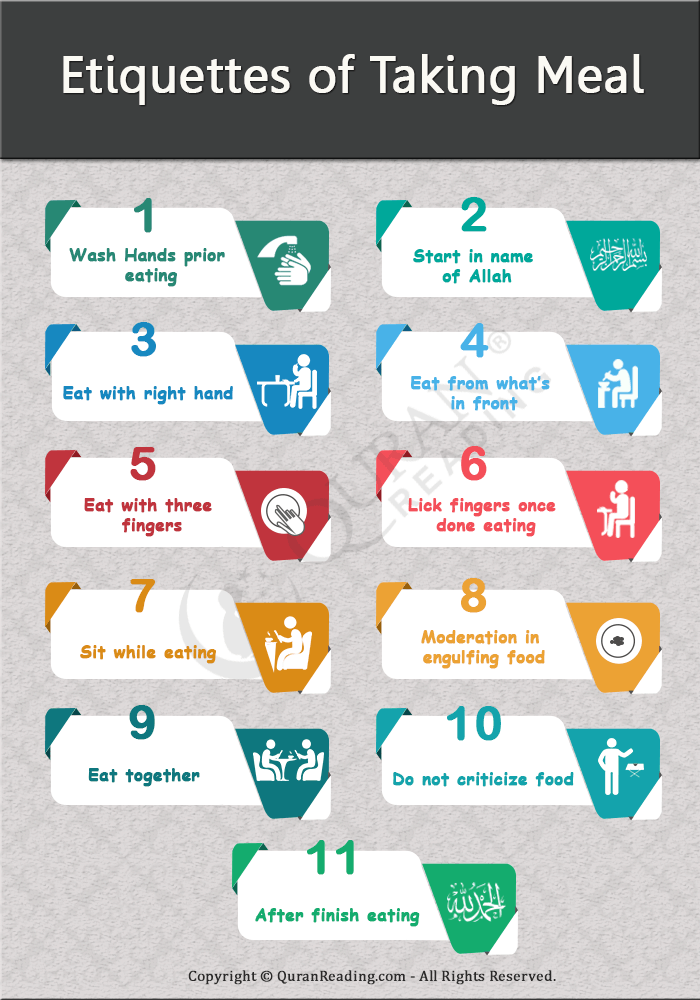 Prior table etiquettes overall hygiene and cleanliness is highly recommended because it is linked with “Half faith” and faith reaffirms “Taqwa”  which is the worth appraising deed in sight of Allah. Hygiene encompasses cleanliness in food handling, preserving, and processing along physical cleanliness.

“Cleanliness invites towards faith, and faith leads its possessor to the Garden.” [Reported by Al Tabarani]

In Islam the eating manners starts with physical purity to alleviate germs and ends on grabbing Allah’s bounties by thanking Him for the blessed Hilaal (permissible) food that He has provided to worshippers.

Wash hands while starting the practice of eating because it is the integral part of physical cleanliness as stated:

“The Messenger of Allah (PBUH) said: ‘Whoever would like Allah to increase the goodness of his house, should perform ablution (wash hands) when his breakfast is brought to him and when it is taken away.’” [Ibn E Majah]

2. Starting in Name of Allah:

Before starting any work, it is deemed mandatory to invoke Allah by supplication just to barricade Satan who partakes when one does not invoke Allah for their help in any particular task. Muslims should start meal in the name of Allah to ward off the Satan as Prophet Muhammad (PBUH) said and quoted in Hadith:

In Quran Allah has advised Muslims to forbid eating the food that has not started or invoked with His name. In the last book of revelation, Allah Almighty says:

“And do not eat of that upon which the name of Allah has not been mentioned, for indeed, it is grave disobedience.” [Quran 6:121]

It was the Sunnah of Muhammad (PBUH) that he used to do his all chores with his right hand be it combing or eating. The compulsion in eating with right hand is a distinction between Muslims and Satan because Satan eats with his left hand. Ibn E Umar narrated it that:

4. Eating from What’s in Front

The Sunnah of Muhammad (PBUH) emphasizes on eating from single plate and what is in front as Hadith narrates reported by Umar ibn E Salamah that:

“O young boy, say Bismillaah, eat with your right hand, and eat from what is directly in front of you.” [Bukhari]

In the Arab peninsula, the pagans were accustomed of eating their meal with five fingers thereupon, to differentiate between the believers and Heretics prophet advised his followers to eat with three fingers including thumb, middle, and index finger. Ka’b Bin Malik quoted as narrated in Hadith that:

“I saw the Messenger of Allah, peace and blessings be upon him, eating with three fingers (i.e. the thumb, the index finger, and the middle finger).” [Muslim]

It is Mustahab to lick one’s three fingers once done with meal. The licking can be either by wife, son or those who does not feel any aversion. Reason of licking is to engulf all the blessings that no one knows where it lies in the plate, food or at the tips of the fingers being used for eating purposes.

“Whenever the Messenger of Allah (peace and blessings be upon him) ate food, he would lick his three fingers.” [Muslim]

Prophet Muhammad (PBUH) would never eat his meal when was in reclining position. Apart from the Sunnah, it has scientific merits too which leads to the weakening of stomach and has considered the symbol of arrogance used back in 14th century by the Greek and Roman pagans.

“Messenger of Allah (PBUH) said, “I do not eat reclining (against a pillow).” [Bukhari]

The key towards healthy well being is moderation. Eat-sleep-and-repeat should not be the motto rather be moderate in eating and do not be extravagant. Stuffing oneself until throat is not the eminence of the son of Adam as stated:

In Islam Muslims are advocated to eat together because it doubles the bounties of the sole creator of Universe as stated in Hadith:

“Some of the Companions of Messenger of Allah said: “We eat but are not satisfied.” He said, “Perhaps you eat separately.” The Companions replied in affirmative. He then said: “Eat together and mention the Name of Allah over your food. It will be blessed for you.” [Abu Dawud]

10. Do Not Criticize Food

Finding food and eating is one of the blessings that a few are blessed with as the rate of poverty has touched the skies and many among common people are struggling to get Hilaal (permissible) food. Being the followers of Muhammad (PBUH) Muslims should emulate the rituals for attaining blessings and be thankful to whatever they have despite being taste, quality, or quantity. Allah says:

“O you who have believed, eat from the good things which We have provided for you and be grateful to Allah if it is [indeed] Him that you worship.” [Quran 2:172]

Glorify the Lord for His bounties once finish eating meals. Remember the creator and sustainer and thank Him for His innumerable favors through supplication. Prophet Muhammad (PBUH) taught his followers to express their gratitude as:

“One who has eaten some food and then says: ‘All praise is for Allah, who has given me this (food to eat) and provided for me without any effort or power on my part’, he will have his sins forgiven.” [Tirmidhi]

Surmising, West has adopted the narrated etiquettes of food in Holy scriptures because it not only holds spiritual benefits but scientific too. It helps strengthening the digestive system and immunity of the body. The unseen benefit of following Sunnah and Islamic teachings is linked to the silver-lining of beseeching Allah’s mercy in order to cash every infinitesimal subtle act and to mould it into ibadah.