The sacred & most precious month of Ramadan is approaching fast and one must be both physically and mentally prepared for it from this very moment. Some of us mislead ourselves by having silly idea that when Ramadan arrives, we will abruptly modify our timetables and start venerating Allah SWT day and night which is not always the case. The Holy Prophet ﷺ and His righteous companions used to get themselves ready for this auspicious time of the year. Therefore, if we actually desire to make the best out of Ramadan this time around, then we ought to plan for it right now. As our life is uncertain, it makes every Ramadan very much our last one as well. That is why we have to fully utilize it, as the recompense of each noble action in this holy month is many times as compared to deeds committed in normal days. The Messenger of God ﷺ is reported to have said:

The above mentioned Hadith tells the tremendous amount of rewards received by a believer during these 30 days of blessings. One simple good act is equal to a compulsory action in Islam and necessary religious acts render remuneration equal to 70 times. Such is the irony that we despite being Muslims love to avail every discount offer set at shopping malls, yet we do not realize the great and eternal discounts given to us in the sacred month of Ramadan by the Gracious God. 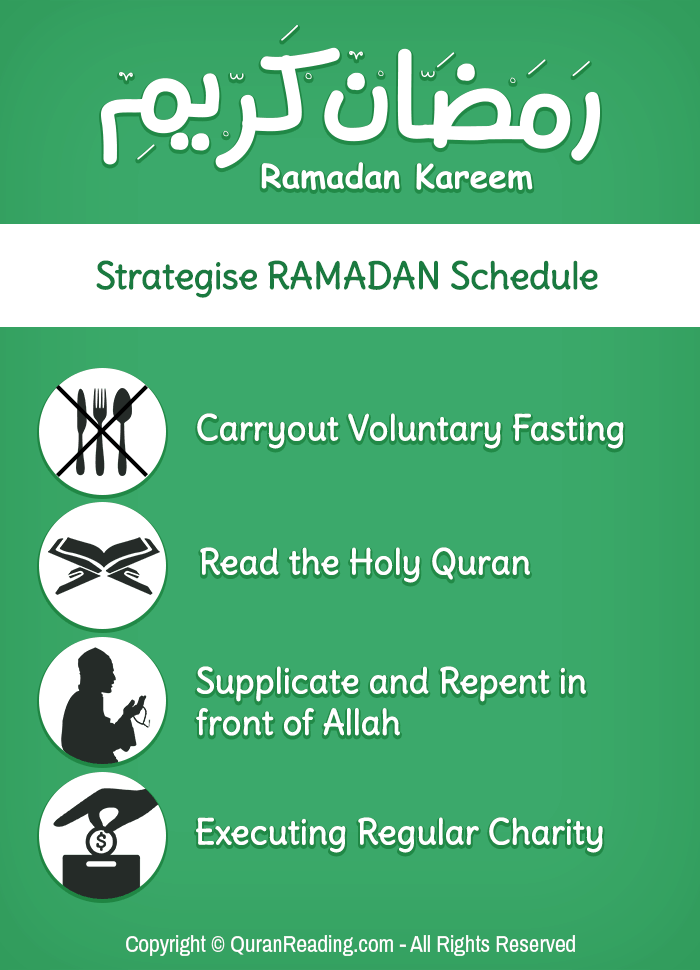 Now the question arises how we can get prepared for a sudden change that occurs in our lives in this time of the Islamic Calendar. We can take help from the following sets of activities in order to strategize our Ramadan Schedule in advance to be better prepared for it:

The most important task in Ramadan itself is fasting, so there is no other better way to get geared up than performing deliberate fasts. The Apostle ﷺ of Allah SWT used to fast throughout the year and advised Sahaba (R.A) to do the same. Abu Tharr (R.A) narrated:

“O Abu Tharr! If you fast three days of every month, then fast the 13th, the 14th and the 15th [these are called the al-ayaam al-beedh, the white days]”. (Ahmad and Tirmidhi)

Thus, Rasulullah ﷺ has devised for all of us to plan for Ramadan by fasting on these three days of every month. On another occasion, He (PBUH) said:

“Fasting and the Qur’an will intercede for the slave on the Day of Resurrection. Fasting will say: “O My Rabb! I prevented him from food and desires, so accept my intercession for him.’ And the Qur’an will say: “I prevented him from sleep during the night, so accept my intercession for him.’ He (PBUH) said: ‘and they will (be allowed to) intercede.’” (Ahmad)

It means that fasting in normal days will not help us in better preparation for Ramadan but will also lead to our pardoning in the hereafter.

The Holy Quran was first revealed in the sacred month of Ramadan which is a great source of enlightenment and guidance for all the disciples of Islam. Apart from getting clearance in different matters of life, its recitation also results in forgiveness on the Day of Judgment as it will intercede for its reader as described in earlier Saying of Hazrat Muhammad ﷺ. The narration of each and every letter of Furqan e Hameed itself renders ten blessings in normal days.

Therefore, if we want to benefit from increased rewards in Ramadan, then we will have to start reading Holy Quran from now.

Supplicating And Repenting In Front of Allah

Nearly every Muslim prays and regrets its wrongdoings in the holy month of Ramadan, but majority lack sincerity. Therefore, the best way of adopting this attitude in our daily lives is to perform these actions regularly.

“Nothing is more honorable to Allah the Most High than Dua.” (Sahih al-Jami)

And whoever does a wrong or wrongs himself but then seeks forgiveness of Allah will find Allah Forgiving and Merciful. [Quran, 4: 110]

Hence, by supplicating and repenting to the Most Merciful in normal days will definitely be helpful in attaining the desired level honesty in our actions. It will also result in acceptance of Duas and our forgiveness in Ramadan as deeds are worth more in this month.

Zakah is the name of helping deprived ones with something that they require. Unfortunately, most of us mistake it for only Ramadan. Although its rewards is many times in it, but one has to conduct it regularly. Rasulullah ﷺ has said:

“He who feeds a fasting person will gain the same reward as he will, without decreasing from the fasting person’s rewards.” (Ahmad)

Therefore, to better recognize the needs of poor people in Ramadan, one has to make a habit of conducting regular charity all through the year.

Apart from these, we should take on the way of life of the Messenger ﷺ of Allah SWT in our daily routine. We can improve a lot by having moderate diet, controlling our tongue, adopting good manners etc.

“Whoever revives an aspect of my Sunnah that is forgotten after my death, he will have a reward equivalent to that of the people who follow him, without it detracting in the least from their reward.” (Tirmidhi)

There is no doubt that performing and preaching about Sunnah of Hazrat Muhammad ﷺ is a great source of success. This disciplined life in normal days will greatly help in effective execution of necessary tasks in Ramadan.

In short, we should all get ready for upcoming Ramadan from this very moment and assess our lives to make it according to its rightful requirements.