Prophet Muhammad (SAW) is the last Prophet of Allah Almighty. Allah (SWT) has motivated His Messenger (PBUH) with two kinds of revelation: the Quran and the Sunnah. The Sunnah refers to everything that is said, done or admitted by the Prophet (SAW).  For Muslims, their true love is for Prophet Muhammad (SAW) whose entire life is encoded in his Sunnah. Prophet Muhammad (SAW) is the walking Quran and following him is the right path which leads towards ultimate satisfaction. There is the great importance of following Prophet’s Sunnah that we should know and then try to follow His (SAW) way then we can be successful in both worlds.

For Muslims following the actions of the Holy Prophet (PBUH) is the matter of meaningful importance because his Sunnah is the source of great benefits for the followers. Believers are encouraged to act in accordance with the Sunnah of the Messenger of Allah. If we follow Sunnah of Muhammad (SAW) we can get many benefits by following Prophet’s Sunnah. Allah says in Quran: “There has certainly been for you in the Messenger of Allah an excellent pattern for anyone whose hope is in Allah and the Last Day and [who] remembers Allah often.” (Quran 33:21)

A person who loves Allah really will definitely try to resemble the person whom Allah loves and is pleased with, and try to replicate his deeds. Hence, despite not everyone can act in accordance with the whole Sunnah, but everybody can have the intention of acting in accordance with the Sunnah and be in favor of the Sunnah. We all know one day this world will come to an end, therefore, all of us should try to live our lives according to the Sunnah of Prophet Muhammad (SAW). Allah (SWT) has stressed the obligation of showing complete obedience and submission to Prophet Muhammad (SAW) that is to follow Muhammad (SAW) Sunnah in many verses of Quran. Allah says: “And whatsoever the Messenger (Muhammad PBUH) gives you, take it, and whatsoever he forbids you, abstain (from it), and fear Allah. Verily, Allah is Severe in punishment. “(Quran, 59:7)

Sunnah consists of the character, etiquettes, habits and legislative obligations of our Holy Prophet Mohammad (PBUH) performed to keep the Muslim believers closer to Allah (SWT).Prophet Muhammad (SAW) always practiced in his life what Allah (SWT) has revealed on him in the form of Divine revelation the Quran.  He followed all the precepts of Islam to become a leader for Muslims who can be followed to lead a pious life.  For every Sunnah, a Muslim follows there is the number of benefits on physical and spiritual grounds. We will discuss some benefits of following Prophet’s Sunnah in this article. 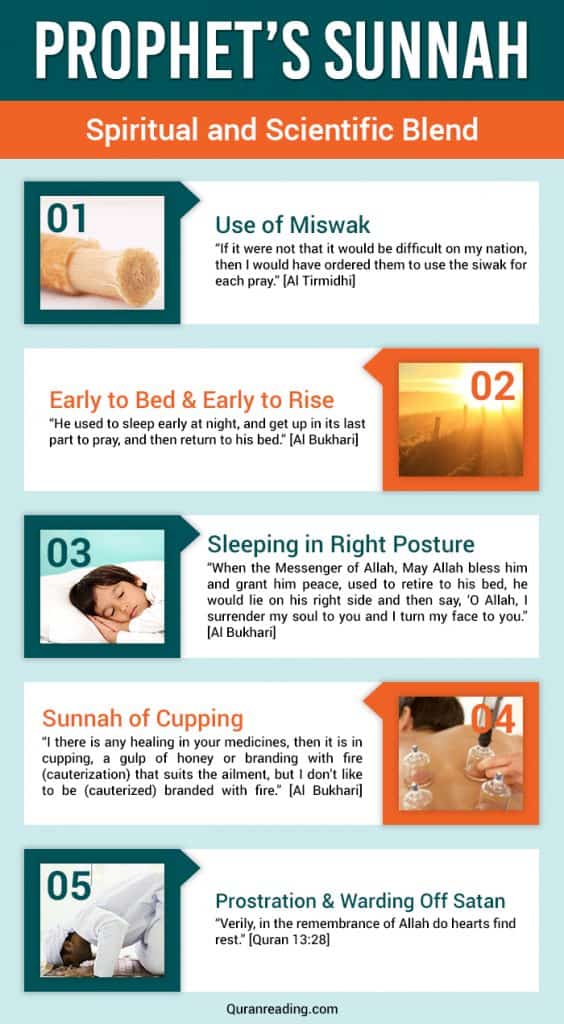 We should follow the Sunnah of Prophet Muhammad (SAW) in our daily life routine so that we can get benefits from them and can live healthy, happy and peaceful life.