The word Da`wah generally means “Calling people towards Allah and His instructions”. The practitioner of preaching is known as Da`i. This act is commonly thought of being limited to religious matters only like Oneness of God, reading the Holy Quran in Arabic, Hazrat Muhammad (PBUH) being the last Prophet, believing in prophets and day of judgment, offering Salah etc. rather it is the complete package of advocating in favor of what is good. It includes both spiritual and secular Islamic instructions for sake of betterment of common people.

It could be of two types: first, it can be the act of proselytizing, where the preacher tries to convey its message of religious convictions to non Muslims through convincing dialogue. Second, it can be for the purpose of reminding the present Muslim Ummah about their duties and responsibilities as per commands of Quran and Prophet`s (PBUH) Sunnah. In any case, a Da`ee (Preacher) must have sincerity, complete knowledge and wisdom, patience, constancy, modesty, empathy and above all it must be a great devotee of advocated teachings. 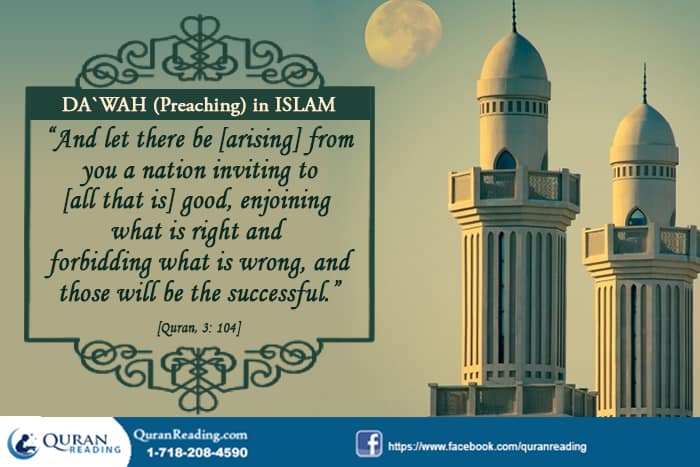 The substantial significance of Da`wah can be determined from the following facts:

Although it is a moral responsibility of any individual to spread a word of uprightness and try to stop others from unlawful activity, but for a Muslim, it is not only its task from ethical point of view, but also a must do action from a sacred standpoint as well. Allah Almighty directs us to take on this very deed in the Holy Quran as:

“And let there be [arising] from you a nation inviting to [all that is] good, enjoining what is right and forbidding what is wrong, and those will be the successful.” [Quran, 3: 104]

So, it is one of the basic criteria for every  Muslims to instruct fellow human beings towards fundamental Islamic wisdom about the difference between correct and incorrect in order to thrive in our lives. Apart from that, being among the enlightened ones, we must strive to inform others about implications of such wisdom, e.g. knowing that without the belief on One Allah, no one can make it in the hereafter, we should tell our Muslim brothers and sisters to avoid begging in front of those so called spiritual leaders, who claim to fulfill needs without mentioning Allah`s guidance or using Quranic ayahs, nor take them as the eventual relievers of pains and miseries, as it is equivalent to Shirk (considering someone as identical to God). In short, Da`wah should be considered as a consistent process and a part of one`s lives whoever calls itself a Muslim.

Carrying out Job of Prophet (PBUH)

All the Prophets whom Allah SWT sent down on earth, had one basic task to do, and that was Da`wah or call their locals to remembrance of One God, adoption of the ethical and avoidance of the immoral, which makes it the best occupation to do. The Messenger (PBUH) of Allah was not restricted to a single nation; rather He was given a profession to transform lives of the whole world, which makes us necessary on us to invite everyone en route to Islamic understanding of the world, irrespective of their religion. The Glorious Lord has regarded this act being the way of Hazrat Muhammad (PBUH) in the Sacred Book as:

Say, “This is my way; I invite to Allah with insight, I and those who follow me. And exalted is Allah; and I am not of those who associate others with Him.” [Quran, 12: 108]

Being the staunch disciples of the Sunnah of the Prophet (PBUH), it becomes our liability to take up the good work which He has left behind, if we call ourselves His true lovers. The value of this deed is in our lives is evident from the fact that Mus`ab ibn Umair (R.A) was sent to Yathrib (Madina) by the Holy Prophet (PBUH) to educate them about the Islamic revelations. It means we should consider bringing people towards righteousness as accomplishing the finest work to do, because of its connection with our beloved Muhammad (PBUH).

Since preaching goodness is a virtuous endeavor, so it also comes up with receiving huge returns from Allah SWT. Just like one gets eligible for obtaining His bounties as a result of spending in the way of the Almighty Lord, e.g. for purpose of building of a mosque, or for Jihad etc. same way preaching towards Allah`s instructions also serves as a source of getting great rewards from Him. The Holy Prophet (PBUH) emphasizes on impact of Da`wah as:

It means that incentives from this action are continuous in nature, as enlightening one soul would result in the illumination of its future generations. A person gets the same reward as does its follower of Islamic teachings, e.g. if they pray five times a day, person who has informed them gets the same reward, and this process continues till they remain on the right path.

Strengthening of One`s own Faith

Transforming others` lives positively is no doubt a great achievement for any one, but Da`wah also helps in constant purification of one`s own soul and avoidance of satanic attacks when it learns about new Islamic lessons for the sake of teachings them to others. As, Da`ee needs to have a strong hold on every perspective of a given topic that it is lecturing others about and also act as an example, so by constant research of the religious and Sunnah instructions, that particular instructor improves its own knowledge and tends to know about newer issues. So, this process in turn perks up one`s own devotion to teachings of Islam.

Being Successful in the Hereafter

As discussed above, inviting people towards right and refraining them from wrong is one`s responsibility as a Muslim, and we have strong conviction about being asked on the Day of Judgment about all of our duties like raising of children, spending of wealth, religious obligations etc. so we should be aware of completion of the task of Da`wah as well. As the Holy Prophet (PBUH) one said about this matter as:

“Whoever is asked about some knowledge that he knows, and then he conceals it, he will be bridled with bridle of fire.” (Tirmidhi)

The above stated Hadith shows that it is our job to explain to others about the useful information we have, and bring them to light. Speaking of a single good thing is also important, it might well be possible a subject which looks mere to us, it may transform life of another altogether. So, we should not hesitate from preaching about any matter which has had a positive effect on our lives.

In short, Da`wah is a great act from Islamic perspective, which benefits both the parties, i.e. the ones who preaches, and the one who is being sermonized about the good, and leads to successful life on earth and the hereafter.