Without any doubt, prayer is the necessary and integral component of Islamic faith. It is obligatory upon every Muslim to say prayers regularly five times a day and represent his or her submissiveness to Allah Almighty by prostrating in front of Him regularly. Therefore, the importance and significance of prayers cannot be denied in Islam.

An article discussing core elements to consider while offering prayers is already posted. And, in this post, we will mainly discuss the major prerequisites of offering prayer in addition to few tips that can help in improving concentration during the prayer. 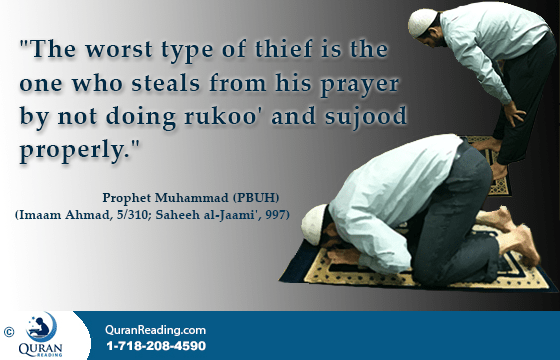 Purification – For saying prayer, the first thing that is required above all is purification. This purification needs to be present on both physical and spiritual levels. Therefore, before saying prayer a person must perform ablution to ensure that he or she is void of any physical impurity and the body and clothes are free from any kind of impure substance that make the prayer void. Other than that, a person must be true in hear that he or she is going to perform this prayer for Allah Almighty. Prophet Muhammad (PBUH) said in this regard:

“The prayer of one without purification is void…..” (Tirmdhi)

Intention – The second requisite required for performing a prayer is intention. In order to say a prayer, a Muslim needs to have the intention of performing prayer. Without the intentions of saying prayer, all the actions and prostrations are just postures and they don’t carry any spiritual benefit. Pertaining to intentions, Prophet Muhammad (PBUH) said:

“Verily all actions are only by intentions.” (Bukhari)

Therefore, before standing for prayer, a Muslim must have the intention of performing the prayer.

Being Sensible – The third requisite for saying prayer is being sane and mature. Prayer means praising Allah Almighty and showing submissiveness to Him, therefore, in order to perform acts of such sublimity, a person also needs to be sane and mature. Prophet (PBUH) saud:

“The pen (which records one’s deeds) is raised from the account of a person in the following three situations: a sleeper until he awakes, a child until he matures (reaches age of puberty) and insane until he regains sanity.” (Dawood)

Thus, sanity must be ensured pertaining to offering prayers.

Body Being Properly Covered – The fourth element that needs to be ensured before saying prayer is making sure that the body is properly covered. The covering of body refers to the mandatory areas, which need to be covered in any case. In this regard, Allah Almighty says in Quran:

Adornment here refers to the necessary parts of the body that need to be covered. Therefore, before saying prayer the body needs to be covered in the ways recommended by Islam.

Facing Qibla – The fifth requisite of offering prayer is facing towards Kibla. For a Muslim it is imperative to face towards Kabah when saying prayer. In this regard, the hadith of Prophet Muhammad (PBUH) says the following:

“When you stand for prayer face the qiblah, make takbeer, utter glorification and praise for Allah, recite the Mother of the Book (Al-Fatiha)…” (Bukhari)

In short, the aforementioned are the major requisites that need to be ensured before saying prayer so that it is offered in the right way and the chances of its acceptance increase.

Improving Concentration While Offering Your Prayers

Pertaining to Salat, one of the biggest issues or problems faced by majority of people is that they are not able to concentrate properly during the prayers. As humans, living a life of worry it is quite natural that different kinds of thoughts come to the mind during the prayer. However, a busy or hectic life is no excuse for not concentrating properly, rather a Muslim should and must try to suppress these thoughts and divert the concentration towards Salat in order to be properly and attentively fulfill its purpose and stand in the court of Allah Almighty. The lines give some effective tips pertaining to increasing concentration during Prayer and saying it with more attention and focus.

Protect Your Thoughts During The Whole Day – It happens seldom or it is quite difficult that you have an on and off button for thoughts which you turn off during the Prayers. Rather, you will have to train your mind to control the thoughts by practicing it throughout the day. In this regard, if the whole day you try focusing on praising Allah Almighty and thinking of Him as the Creator and Lord, then chances are that during the prayer you will also have the same pure and worshiping thoughts. Therefore, instead of being coercive on your mind during the prayers, you need to try practicing control throughout the day.

Remember A Sacred Place – Another effective way of increasing your concentration during Salat is to remember some sacred place you have been to earlier in your life. In this regard, if you have performed Hajj, then recollecting those memories can help a great deal. You can remember the feelings you had at that time and the way your heart submitted to Allah Almighty, and then bring those feelings on yourself again during the Salat. This way you will have the same feeling and same concentration during the Prayer.

Start Preparing During Wudu – Instead of just forcing your mind to think the way you want it to think at the start of the prayer, a smart ploy could be to start preparing your mind during the Wudu session. When you are performing ablution, you should start thinking that you are preparing to stand in the court of Allah Almighty who is our Creator and during the prayer He will be showering His blessings upon you. Thus, when you start preparing yourself at the time of Wudu, by the time you stand for the prayer, your mind is already into the thoughts of submitting to Allah Almighty, which then reflects during the Salat.

Learn The Meanings – If nothing works for you pertaining to concentrating during the prayer, the one thing that can work with effectiveness is concentrating on the meanings of the recitation you perform during the Salat. You have to recite a specific set of Arabic supplications and text from Quran during every Rak’at. When your mind does not control the thoughts then the best way is to divert them towards the meaning of the Arabic text. When you concentrate on the meanings, you get to know about what they mean and thus the meaning influences your thoughts, which again invoke and evoke the feelings of submissiveness and humility in front of Allah Almighty, which is the most crucial component for a prayer to be accepted by Allah Almighty.

Practice – Let’s be true, the controlling of thoughts or increase in concentration during prayers won’t happen overnight. Rather, like every other process it is gradual and you will have to keep on practicing it in order to ensure that your mind keeps on controlling the thoughts until one day you succeed in doing so. Therefore, no matter what, keep on practicing control.

In a nutshell, Salat is one of the major pillars of Islam, therefore, it deserves the same level of reverence and attention. Thus, for a Muslim, it is imperative to know about all the components that affect Salat, and ensure that all the requirements are being met and proper concentration is present when offering prayer.