Islam is the religion of peace. Over billions of people around the world are followers of Islam. There can be no greater argument supporting Islam as a religion of peace than the name of the religion itself. ‘Islam’ literally means peace, therefore, it seems quite unnatural that a religion that names itself peace can teach or preach something that is violent or full of aggression. Allah Almighty in Quran has encouraged the establishment of peace and has told the followers of Islam to be moderate in their behavior and adopt the qualities of kindness, love, and respect for others. There are so many Hadith on the importance of peace in Islam that we will discuss in this article. 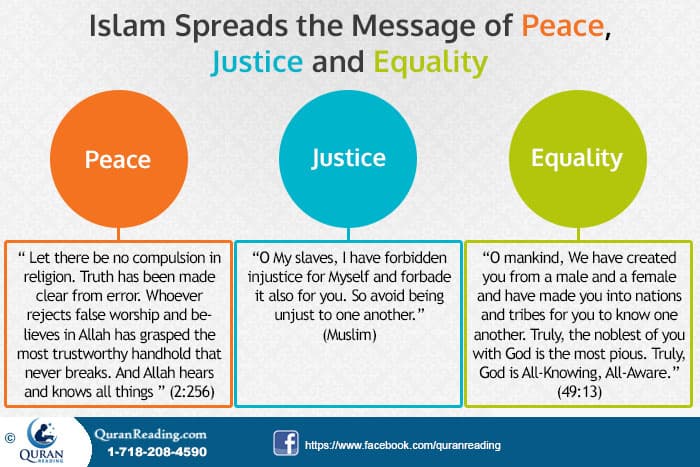 Islam- A Religion of Peace

The root of the word Islam is “silm”, refers to “making peace”, being in a mutually peaceful environment,  finding peace, reaching salvation and well being or being far from danger, attaining goodness, comfort and favor, keeping away from troubles and disasters, submitting the self and obeying, respect, being far from wrong. Islam is a peaceful religion. It stands for peace and desires peace. The basis of Islam is peace. Islam wants peace for its followers and all the other residents of the world.

A true Muslim is the one who truly follows Islam, someone who is at perfect peace, with himself and with others. As our beloved Prophet Muhammad (SAW) said, mentioned in the Hadith collections of Tirmidhi and Nasai: “A true believer (mumin) is he from whom people’s lives and wealth are safe.” Allah wants a Muslim to live in a safe and peaceful environment and to make efforts for the spread and continuity of peace in society for him and for all others.

According to Islam, peace is not simply an absence of war. Peace opens doors to all kinds of opportunities that are present in any given situation. A true Muslim should seek to bring others close to him, not to drive them away from him. This is why the Prophet declared, in a Hadith report incorporate in the Sahih al-Bukhari: “In him, there is no merit who is not familiar with others and with whom others are not familiar”.

Muslims should respect others and try to maintain peace and should follow the straight path. Our beloved Prophet Muhammad (SAW) was sent as nothing but mercy to all the mankind. If the bringer of a religion is nothing but mercy and in His brought Truth there is no compulsion then the impression that Islam promotes violence seems illogical. Thus, Islam in its true preaching is nothing but peace.

A perfect Muslim is one from whose tongue and hands mankind is safe. In Islam, the right to life is an absolute value, In Quran Allah mentioned that: “He who kills a soul unless it be (in legal punishment) for murder or for causing disorder and corruption on the earth will be as if he had killed all humankind, and he who saves a life will be as if he had saved the lives of all humankind.” (Quran 5:32) One of the main objectives of our religion is to introduce into the world an ideology that facilitates the spreading of peace at every level. Spread peace at an individual level as well as social level so that we can live a peaceful life with other Muslims and also we can portray a very good and peaceful image of our religion Islam.

Virtuous deeds are acts that purify humankind of aggression and bring them to peace. These help to promote peace in society, peace, the original state that succeeds in relations between individuals and societies. Islam is a religion of peace in the complete sense of the word. Every teaching of Islam is based on the principles of peace and avoidance. Any disparity from the model is a disparity between Islam and is due to misinterpretation. We should, therefore, understand the ideology of peace given in Islam and our actions should base upon this ideology so that peace will overrule in the world.

Hazrat Muhammad (SAW) is the last prophet of Almighty Allah. He (SAW) was sent for all mankind as a mercy. Quran is the divine Book of Almighty Allah and sent to Prophet Muhammad (SAW) so that He teaches Muslims what Allah has said in Quran. We should not take help from one source only rather we have to combine both the Wisdom of Quran-e-Kareem and Sunnah of the Prophet (SAW) of Allah together in order to benefit from them more effectively.

The two fundamental sources of Islam are the Quran and the Sunnah of the Prophet (SAW). By Sunnah, we mean the actions, sayings and silent permissions (or disapproval) of the Prophet (SAW). Hadith is considered to be second to the Quran. It is impossible to understand the Quran without reference to the Hadith, and it is impossible to explain a Hadith without relating it to the Quran. So we should understand both Quran and Hadith in order to get benefits.

“O people, spread peace, feed the hungry, and pray at night when people are sleeping and you will enter Paradise in peace.” (Sunan Ibn Majah)

Abu Umamah reported: The Messenger of Allah, peace, and blessings be upon him, said:

“Verily, the best of the people to Allah are those who begin the greeting of peace.” (Sunan Abu Dawud 5197)

Narrated ‘Aisha (may Allah be pleased with her): The Prophet (PBUH) said, “The most hated person in the sight of Allah is the most quarrelsome person.” (Sahih Bukhari)

On the authority of Abu Huraira (peace and blessings of Allah be upon him), reported: The Messenger of Allah, (SAW), said, “You will not enter Paradise until you believe and you will not believe until you love each other. Shall I show you something that, if you did, you would love each other? Spread peace among yourselves.” (Sahih Bukhari)

Securing peace was a major expedition of the Prophet Muhammad (SAW), which was crucial for conveying Allah’s message to others and for the sustenance of a society of individuals who followed Allah’s teachings in their personal and collective affairs. For the first thirteen years of his Prophet Hood, the Prophet (PBUH) remained in his city of Mecca, using peaceful means of persuasion despite the powerful opposition that he had to confront. Despite horrific persecution, he and his followers remained steadfast and determined, preaching to the people and seeking to guide them to the right path. Later, when the situation became intolerable, he left for Medina, where his first effort was to establish peace and to build bridges of love, brotherhood, and harmony between the Muslim migrants.

From above example, we can conclude that no matter what’s the situation is we should try to maintain peace and harmony among us and with others in this way we can follow the Sunnah of Prophet (SAW) and also spread our religion in a peaceful way.

The possible reason that one can come up with related to the presently defame image of Islam is perhaps the negligence of Muslims when it comes to developing an understanding of Islam. It is due to lack of understanding that Muslims have forgotten the true preaching of the religion and have succumbed to the false interpretations. We should spread peace to portray the real image of religion Islam.