Charity is an act of giving out to the people in need and society at large. Charity can be in form of money, goods, food or even simple act of spending time with those who need your assistance in any form. Life doesn’t offer equal opportunities for everyone; through charity we can share our blessings with those less fortunate and thus try to bring balance in the society. 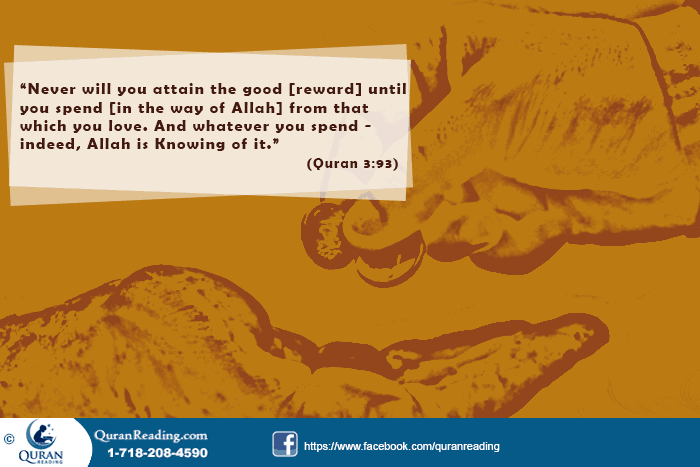 Islam, being the religion of Peace, strongly advocates Charity. Allah has made charity (Zakaat) an obligation on every believing Muslim. Quran and Sunnah put great emphasis on charity through multiple mentions of charity in Quran and Hadith. The Last Messenger, Prophet Muhammad (PBUH) presented many examples of charity in His lifetime and thus it becomes compulsory on Muslims to follow the suit. The Prophet (PBUH) said that

“The believer’s shade on the Day of Resurrection will be his charity.” (Al-Tirmidhi, Hadith 604)

The concept of charity derives from the fact to acknowledge that we own nothing but whatever has been given to us is a blessing by Allah (SWT) and it’s His property. So when we give out something from our pocket, we are actually sharing Allah’s blessings with His mankind and since we don’t own anything, we don’t lose anything by giving out but only gain Allah’s rewards.

“Never will you attain the good [reward] until you spend [in the way of Allah] from that which you love. And whatever you spend – indeed, Allah is Knowing of it.” (Quran 3:92)

Charity is purely for the sake of Allah and no worldly gain should be intended while making charity. It should only be made to seek Allah’s forgiveness and His blessings.

“They ask you, [O Muhammad], what they should spend. Say, “Whatever you spend of good is [to be] for parents and relatives and orphans and the needy and the traveler. And whatever you do of good – indeed, Allah is Knowing of it.”” (Quran 2:215)

It is said that no one should be aware of the charity you give out so much so that your left hand shouldn’t be aware of the charity you give out with your right hand. Secrecy should be kept when giving charity for two reasons. Firstly, charity is for Allah and not to show off your good deeds and wealth to the world, and secondly in order to not hurt the respect and honor of the person being given charity. In Quran, Allah reminds us not to be boastful of our charity in the following verse:

“You who believe, do not cancel out your charitable deeds with reminders and hurtful words.” (Quran 2:264)

There are two forms of charity in Islam – obligatory and voluntary, called Zakat and Sadaqah respectively.

Zakat means Purification, growth and blessing. It is given out once a year generally during the month of Ramadan. However, those failing to give Zakat in Ramadan, can pay their charities at any time of the year. It is one of the fundamental pillars of Islam which complete the faith of a Muslim. According to Islamic regulations, Zakat is 2.5% of one year’s total cumulative wealth. Zakat is compulsory for every Muslim and it is payable by every Sahib-e-Nisab. Calculation of Zakat is a very important matter and it should be handled carefully.

Sadqah is voluntary act of charity. Sadqah doesn’t necessarily mean giving out wealth but it can be any simple act of Kindness that another human or even animal benefits from. It is a Sadqah in way of Allah to remove any difficulty from someone’s path as well as it is considered sadqah to smile at someone or just offering a simple Salam. Being kind to animals and taking care of their food is a charity. Offering water to a thirsty person or to help them with some burden are all considered charity and all these acts are rewarded by Allah (SWT).

“Who spend [in the cause of Allah] during ease and hardship and who restrain anger and who pardon the people – and Allah loves the doers of good.”  (Quran 3:134)

“Give charity without delay, for it stands in the way of calamity.” – Al-Tirmidhi

Both Zakat and Sadqah have been mentioned in the Holy Quran countless times. Paying Zakat is always mentioned next to offering Salah, which highlights the importance of Zakat in Islam.

“And establish prayer and give zakah, and whatever good you put forward for yourselves – you will find it with Allah. Indeed, Allah of what you do, is Seeing.” (Quran 2:110)

Giving anything in way of Allah is considered the highest form of Charity. This means, anything which is given for Jihad and spreading of Islam has highest rewards. Sahaba used to rush to perform charity and wanted to outdo each other. They knew the meaning of charity and it rewards on the day of judgment. The best examples of charity can be found from the lives of Abu Bakr, Umar and Usman Ghani; who use to give all their money in way of Allah even if it meant that they sleep hungry for days. Such high examples of charitable deeds were set in the days of Prophet Muhammad (PBUH) to encourage other Muslims to perform charity as well. In the Quran, Allah says

“The example of those who spend their wealth in the way of Allah is like a seed [of grain] which grows seven spikes; in each spike is a hundred grains. And Allah multiplies [His reward] for whom He wills. And Allah is all-Encompassing and Knowing.” (Quran 2:261)

From multiple mentions of charity given in Quran and different examples in Sunnah, we can conclude that charity is essence of Islam and it has great importance in lives of Muslim. Muslim community thrives on charity. The effort Islam puts in financial check and balance for every member of the Muslim society shows the deep values for human rights. It helps building a strong society where the flow of wealth is even and basic human needs are met. Along with the help of those receiving charity, The Muslim who is Giving charity also benefits from it in terms of increase in faith. In Islam, charity is seen as multiplication of wealth in contrast to giving out money which keeps reminding Muslims about Akhirah and their accountability before Allah. Thus Islam and Quran heavily promote charity and every Muslim is rewarded with something which is way better than what he gives up in way of Allah.