A Muslim has the belief that Islam is the true religion which is complete in every regard and there is nothing about the religion that can be deemed flawed or the authenticity of it can be questioned. This belief of Muslims in the authenticity of Islam is due to the fact that in Quran Allah Almighty has openly explained each and every thing and the Sunnah and hadith of Prophet Muhammad (PBUH) also stands as an exemplification of it all.

There is no denying the fact that the wisdom and knowledge that Quran imparts is not to be found in any other book of this world. Moreover, there literariness of Quran in terms of its writing is also a miracle in itself, however, there is another thing about Quran that makes it a miracle and that supplements the idea or belief that Islam is the true religion. This unique feature of Quran is its protected nature where there has not been even a single change in the syllable in which it was revealed. The lines below discuss how the protected nature of Quran stands as an evidence for Islam being the true divine belief. 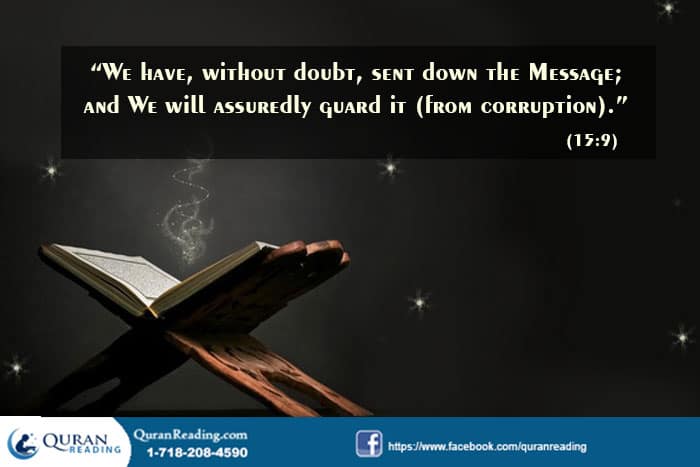 “We have, without doubt, sent down the Message; and We will assuredly guard it (from corruption).” (15:9)

From this ayah of Quran it is evident that Allah Almighty is the protector of Quran. He is the one Who sent it down and then instead of leaving it to people, He Himself has taken the responsibility of guarding the Book from corruption. If Muslims get all their knowledge about Islam from Quran, then it is a safe bet to rely on Quran for guidance and constructing the building of Islam on it because the Book is void of corruption or any other type of human fabrication because of the fact that its protector is Allah Almighty Himself and there is none who can cause corruption to something when He takes on the responsibility of guarding and protecting it.

Compared To Other Religious Scriptures:

Muslims have the belief that Quran is not the only Book sent down by Allah for the guidance of mankind, rather He had sent other Books to other Prophets who gave them to their respective nations. However, sadly, all the Books that came before Quran are not in their pure or original state because the followers of that particular religion have fabricated with the Book and changed its verses and wordings according to their likings. Thus, if the Books that the religions followed could not stay pure and void of any corruption, then the same could be said about their religion as well. In Quran, Allah Almighty says about one of such groups of people in the following way:

“….. and a group of them already were hearing the Speech of Allah; thereafter they perverted it even after they had considered it, while they knew (the Truth).” (2:75)

This ayah shows that how the people of the previous religions changed the word of Allah. They heard the truth, but they perverted it due to their personal reasons and likings. Therefore, the reason why the commandments of the earlier religions and their sacred Books cannot be relied upon is the fact that they tempered and altered with the latter.

At another place in Quran, Allah Almighty says about Jews in the following way:

From this ayah it is evident that of Jews there were people who altered and displaced the word of Allah Almighty. They were given a covenant, however, instead of following it wholeheartedly, they altered with it and changed the text and meaning of it as per their liking.

The question that arises is that why would Allah only protect Quran and not any other religious scripture before it from corruption? The answer to it lies in the fact that after Prophet Muhammad (PBUH) there wont be any other Prophet which makes Islam the final religion and thus the Book it is to carry should be the Last Book. Hence, if Quran is the last Book of guidance that Allah has sent for humanity, then it is quite natural that the Book need be perfect so that people could get the right information from it till the end of times. Therefore, the reason why Allah took on the protection of Quran only and not of the other religious scriptures is the fact that it is the Last Book and it needs to be protected from corruption so that it could offer the true guidance to humanity till the end of world. In Quran Allah says:

“And if ye are in doubt as to what We have revealed from time to time to Our servant, then produce a Surah like thereunto; and call your witnesses or helpers (if there are any) besides God, if your (doubts) are true. But if ye cannot – and of surety ye cannot- then fear the Fire whose fuel is men an stones – which is prepared for those who reject Faith.” (2:23-24)

Thus, the reason why people have not been successful in producing a Surah like Quran is the fact that it is the word of Allah and no human can match or surpass it.

In a nutshell, the authenticity of a religion depends upon the authenticity of the source of its doctrine. If the doctrine is intact in the original condition it was revealed in, then it means that the belief system is still the same, which was when it was revealed. Only Islam can claim such a stature and that too because of the fact that Quran is still under the protection of Allah Almighty. Therefore, every Must be proud of this protected nature of the Holy Book and must drive his/her attentions towards the learning of the Holy Quran. As learning the Holy is what ensures your success in this world and hereafter.