Besides the pleasures and rewards of the world hereafter, the other major role that religion performs is of teaching moral principles to a person. Moreover, these moral principles are not just to be read or understood, rather they need to be put to practice in this world so that the followers of the religion represent their religion on the best manner and on the basis of the life they live, they get an appropriate reward in the world hereafter. 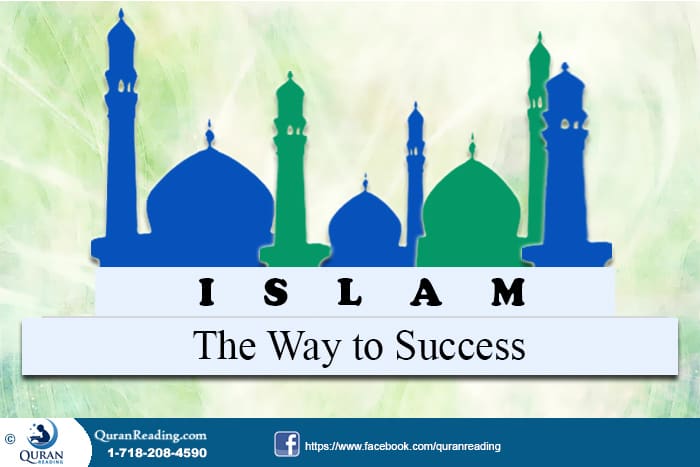 Islam is the complete code of life and it gives details and mentions about each and every aspect of life. Therefore, by following the instructions of Islam one can live the worldly life in the best manner. However, there are others who think that following the principles of Islam alienates them and takes them away from this world and hinders in their way of achieving success in this life. Such a conception about Islam is wrong and it has nothing to do with real message of Islam.

Islam encourages its followers to live this worldly life in the best manner and is against abstinence.  This week, QuranReading.com Academy discusses the key principles of success that can be implemented in life to live it in the Islamic way whilst being well in the world.

The first and foremost important thing that can help a believer live the life in an Islamic way and achieving success through it is believing in God. When the belief of a Muslim increases in Allah Almighty and he or she realizes the fact that Allah Almighty is the sole provider, He is the Supreme and everything comes from Him, then the belief of the believer becomes strong and out of this belief whatever activity he or she undertakes it comes with conviction, and when something is done with conviction, the chances of success increase naturally. Allah Almighty says in Quran:

“Even so, there are some who choose to worship others besides God as rivals to Him, loving them with love due to God, but the believers have greater love for God.” (2:165)

Therefore, in life the increased and greater belief of a Muslim in Allah is a sign of his or her differentiation from the rest of the religions and their followers, and this belief is what will bring success to a Muslim.

The other major Islamic life element that can help a person achieve success is steadfastness. When a person is steadfast in the times of difficulty, or does work with steadfastness in normal circumstances as well, the ultimate result is success in every activity. Allah Almighty instructs the same to Muslims as well in Quran in the following way:

“You who believe, be steadfast, more steadfast than others; be ready; always be mindful of God so that you may prosper.” (3:200)

Thus, if a Muslim wishes to achieve success, he or she needs to be steadfast in whatever activity they undertake and whatever kind of work they do on daily basis.

Another Islamic principle basing the life upon which guarantees success in this world as well as in the world hereafter is the striving for goodness. Being a Muslim it is the primary duty to be good and strive for spreading goodness. When there is goodness all around, the ultimate result is success for all. Allah Almighty says in Quran about this in the following manner:

“But We shall be sure to guide to Our ways those who strive hard for Our cause: God is with those who do good.” (29:69)

The other important Islamic principle that can help in achieving success in life is consultation with others. It is one of the most important aspect of decision making which people ignore primarily because of their arrogance and the impression that they know all. When a person consults with others regarding any matter, chances are that a person gets to listen or see some new perspective which initially would not have been clear to the person, hence reaching a better decision guaranteeing success. Allah Almighty says in Quran:

Therefore, regardless of if you have all the knowledge that is required to reach a decision, the wise ploy that guarantees success is consulting with others.

Make Life Easier For Others:

One of the major problems of the present world is that people are striving to make their life easier on the cost of making it difficult for the others. This approach is wrong and Islam gives the principle of making the life of others easy to achieve success. In Quran, Allah says:

“Seek the life to come by means of what God has granted you, but do not neglect your rightful share in this world. Do good to others as God has done good to you.” (28:77)

Therefore, one must try to do good to others and make their life easier, as the reward of it comes from Allah Almighty and is equivalent reward to the deed if not greater. Regarding the reward of good deeds, Allah says in Quran:

Thus, when doing good with others a Muslim must remember that the reward of it comes from Allah Almighty and that reward is the only success that a person should desire.

This world is full of all kinds of temptations, these temptations if not properly dealt with result in a person going down the path of ignorance without even realizing it. Therefore, in order to do so a Muslim needs to differentiate between right and wrong and stand for the right and forbid the wrong in order to achieve success in the true sense. Allah says in Quran:

“[Believers], you are the best community singled out for people: you order what is right, forbid what is wrong, and believe in God.” (3:110)

Thus, to achieve success on Islamic principles, a believer needs to refrain from bad and commit to doing good no matter whatever the circumstances are.

In a nutshell, Islam is the complete code of life. If a Muslim wishes to achieve success in this world and in the world hereafter, then the best solution available for such a person is to incorporate the principles of Islam in life and climb up the ladder of success.