The biggest problem any school of thought or a movement can face is people not knowing about it. When people don’t know about something, they don’t pursue it regardless of how inherently true and bountiful that thing is, therefore, the disseminating of information to amass followers is imperative, especially when it comes to religion. 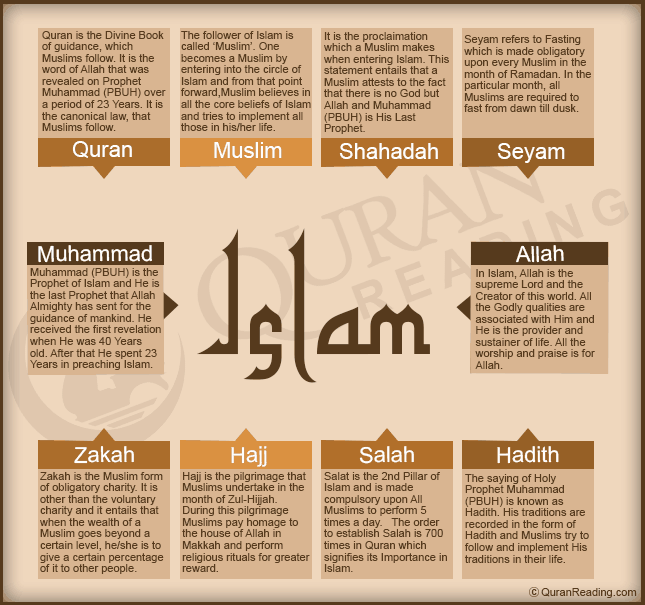 One of the major reasons why people have misconceptions about Islam is the fact that people don’t know about it. This lack of knowledge is partly because of the shallow propaganda against Islam that keeps the people from seeking knowledge about Islam and partly because of Muslims working very little in this era of technology pertaining to spread of information about Islam. The lines below try to fill this void by giving some basic concepts and beliefs of the religion Islam.

The Meaning Of Islam:

The word ‘Islam’ literally means ‘peace’. Those who follow Islam are actually the representatives of peace and safeness. It is the religion that Allah Almighty bestowed upon Muhammad (PBUH) about fourteen hundred years ago and as per Islamic belief system, there will be no other religion send for the guidance of mankind. Therefore, according to Muslims, Islam is the final religion of Allah and if anyone in this world and the times to come is to receive guidance, he or she will be in the circle of Islam.

There are some key figures in Islam that are pivotal to its existence without the knowledge or recognition of which one cannot understand Islam let alone joining it. The key figures which represent Islam are as follows:

Muhammad (PBUH) is the Prophet of Islam and He is the last Prophet that Allah Almighty has sent for the guidance of mankind. Muhammad (PBUH) was born in Makka about 1400 years ago and He received the first revelation when He was forty years old. After that He spent the rest of 23 years of His life in preaching Islam. To Muslims Muhammad (PBUH) was the height of good character and the best of all the people. His traditions are recorded in the form of Hadith and Muslims try to follow and implement His traditions in their life.

Quran is the Divine Book of guidance, which Muslims follow. It is the word of Allah that was revealed on Prophet Muhammad (PBUH) over a period of twenty three years. It is the canonical law, which Muslims follow, and anything that contradicts Quran is not accepted by Muslims. All over the world millions of Muslims recite and learn Quran. Moreover, there is also a great number of people who memorize Quran as well, thus helping preserve Quran in the same word in which it was revealed and not even a single word has changed since then.

The follower of Islam is called ‘Muslim’. One becomes a Muslim by entering into the circle of Islam and from that point forward, a Muslim believes in all the core beliefs of Islam and tries level best to implement all those in his or her life.

There are five pillars of Islam upon which the whole faith stands. These five pillars are obligatory upon every Muslim to observe and follow. Any negligence in fulfilling and practicing these pillars results in great punishment that a Muslim would either receive in this world in some form or in the world hereafter. The lines below briefly discuss the pillars and what they entail, although the information listed below can also be found in a compact form in the two smartphone applications developed by QuranReading.com called, ‘Learn Islam’ and ‘Five Pillars of Islam’.

The first pillar of Islam is Shahadah. It is the proclaimation which a Muslim makes when he or she enters Islam. This statement entails that a Muslim attests to the fact that there is no God but Allah and Muhammad (PBUH) is His Prophet. Without agreeing to this statement in word and in heart, a person cannot enter Islam and if after entering, there rises a doubt in the mind of a person regarding it then he or she has a corrupt faith.

Salah is the obligatory prayer which Muslims perform every day. It is the second and one of the most important pillars of Islam which is why all Muslims are ordered to learn namaz correctly  and then perform it 5 times a day.. In addition to being a means of worshipping and praising Allah Almighty, Salah also stands as one of the best invocations that a Muslim can use in order to ask Allah Almighty of anything. Moreover, Salah is one of the first things that will be asked about on the Jjudgement Day.

Seyam which refers to ‘Fasting’ is the obligatory fast which Muslims keep I n the month of Ramadan. Every years Muslims fast for a month every fast in which lasts from dawn till dusk. During the fasting period Muslims refrain from any kind of eating, drinking and sexual intercourse. The purpose of fasting is to purify the soul and feel the hunger and depravity that the less fortunate people of the world face. Fasting invests the spirit of empathy in the Muslims and makes them more sensitive and sympathetic towards others.

Zakah is the Muslim form of obligatory charity. It is other than the voluntary charity and it entails that when the wealth of a Muslim goes beyond a certain level, he or she is to give s certain percentage of it to other people. Zakah is obligatory for every one who fulfills the criteria and Quran has told of the people who deserve Zakah. In addition to making people share wealth with the less fortunate people, Zakah has far reaching effects on the economy of a society as well. Those who do not pay Zakah whilst being eligible for paying are deemed to receive punishment for this act of theirs.

Hajj is the pilgrimage that Muslims undertake in the month of Zul-Hijjah. During this pilgrimage Muslims pay homage to the house of Allah in Makkah and perform a variety of religious rituals for great reward. Hajj is also an obligatory act that is mandatory for every Muslim who is financially and physically able to undertake it. The Complete Hajj Guide by QuranReading.com is also a smartphone app that can help in giving complete information about Hajj to a Muslim.

In short, Islam is a religion of peace that was brought by Prophet Muhammad (PBUH). The religion has Quran as the Holy Book there are five pillars that are pivotal to becoming a Muslim and staying on the path of righteousness.