If one looks around the world of today then the one thing that one will find most common among people and nations is the lack of tolerance, which then breeds their hatred towards each other. This hatred then takes the shape of violence and terrorism, thus, people whether for their rights or for keeping others subjugated are fighting with each other. 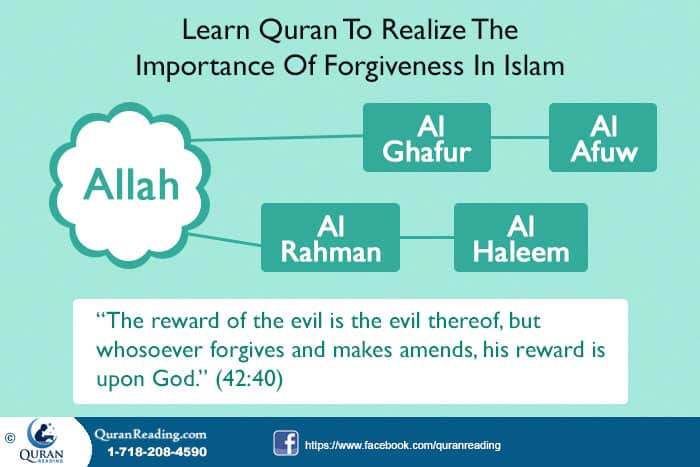 Thus, the one thing, which the world at present needs is the incorporation and promotion of the spirit of forgiveness among people and nations. It is by forgiving that people will be able to move on and make the world a better place for living. If there is no forgiveness then sadly the world will stay in the same plight and even get worse with the passage of time. The lines below discuss the message of forgiveness given by Islam in Quran.

Forgiveness As A Quality Of Allah:

Al-Haleem – The word Al-Haleem is used 15 times in Quran for describing Allah Almighty. This word means ‘forbearing’, ‘clement’, ‘lenient’ and ‘mild’. It goes on to show that Allah Almighty is not quick to judge His subjects, rather He is lenient and tries to be mild when it comes to taking a decision against humans or when holding them accountable for something.

Al-Rahman And Al-Rahim – These are most common two names which Muslims use for Allah. Al-Rahman refers to the abundance of mercy of Allah and Al-Rahim refers to the consistency and always presence of the mercy. The former is used 57 times while the latter is used 115 times in Quran to describe Allah the Great.

All these and many more names of Allah shows that His mercy and forgiveness outweighs any of the qualities of wrath and anger that are associated with Him. Therefore, a true believer who believes in Allah Almighty should be quick to understand that if Allah being the Lord of this world can forgive the immense piles of sins of people, then why cant humans forgive each other for trivial mistakes that are nothing compared to what humans commit against the instructions of Allah. Moreover, these names also tell a person that if the Mightiest can be merciful and forgiving, then why cant the ones who have nothing in their power be forgiving and kind.

The Reward Of Forgiveness Is With Allah:

“The reward of the evil is the evil thereof, but whosoever forgives and makes amends, his reward is upon God.” (42:40)

This ayah is the best remedy for all the major problems of the world of today. What people do is not forgive and not make amends, as a result of which the schism between people increases and they ultimately turn against each other and make lives of each other difficult. Therefore, a Muslim must always take the first step in forgiving and as an outcome of it expect the reward from Allah Almighty. Forgiving like this will be difficult, but if a Muslim keeps an eye on the end reward that will come from the Sublime, then forgiveness becomes easy.

If there is no motive that a person can find in forgiving the other, then the one thing that one can always think about is forgiveness that will come from Allah against the forgiveness that one gives to the other. In Quran, Allah says:

“Let not those among you who are endued with grace and amplitude of means resolve by oath against helping their kinsmen those in want, and those who have left their homes in Allah’s cause: let them forgive and overlook: do you not wish that Allah should forgive you? For Allah is Oft-Forgiving Most Merciful.” (24:22)

Therefore, the least motive that a Muslim can find for forgiving other people is that Allah Almighty will forgive him or her in return. Ergo, if one does not do it for other people, then one should forgive for the sake of one’s own forgiveness.

Kind Speech and Forgiveness are Better than Charity “A kind and courteous word and forgiveness is (much) better than the charity that is followed by (such an emotional) abuse. Allah is free of all wants, and the most Forbearing.” (2:263)

From the ayah it is clear that being kind with someone or forgiving someone is much better than the vain charity one gives or the charity that is followed by emotional abuse. Therefore, if a Muslim does not want to give charity that might boost such emotions or is not in the condition of giving charity, then one must try forgiving others and being kind to them. It will definitely help and would stand as a good gesture in front of Allah Almighty.

A Muslim is to think better of Allah. No denying the fact that Allah is Mighty, Just and Wrathful, however, at the same time He is Merciful and Forgiving as well and these qualities of His easily supersede and overweigh the ones associated with wrath. Thus, by learning Quran a Muslim can get the Islamic concept of forgiveness, adopt it in their daily conduct and then pray to Allah Almighty for it as well.