Each and every verse of Quran is a marvel in itself and learning the verses of Quran reveals that every word of it is a pearl the equivalent of which cannot be found on the surface of this earth nor in any other book written by anyone. Therefore, every verse of Quran holds a unique set of content and the consequent reverence in the hearts of the Muslims.

In this regard, various Surahs of Quran are known for their various benefits and the kind of significance they have content wise. In this regard, Surah Kahaf holds a distinct position among Muslims and it is a Surah, which gives numerous lessons to Muslims. The surah comprises of four stories, which disseminate four different lessons, which every Muslim must learn. 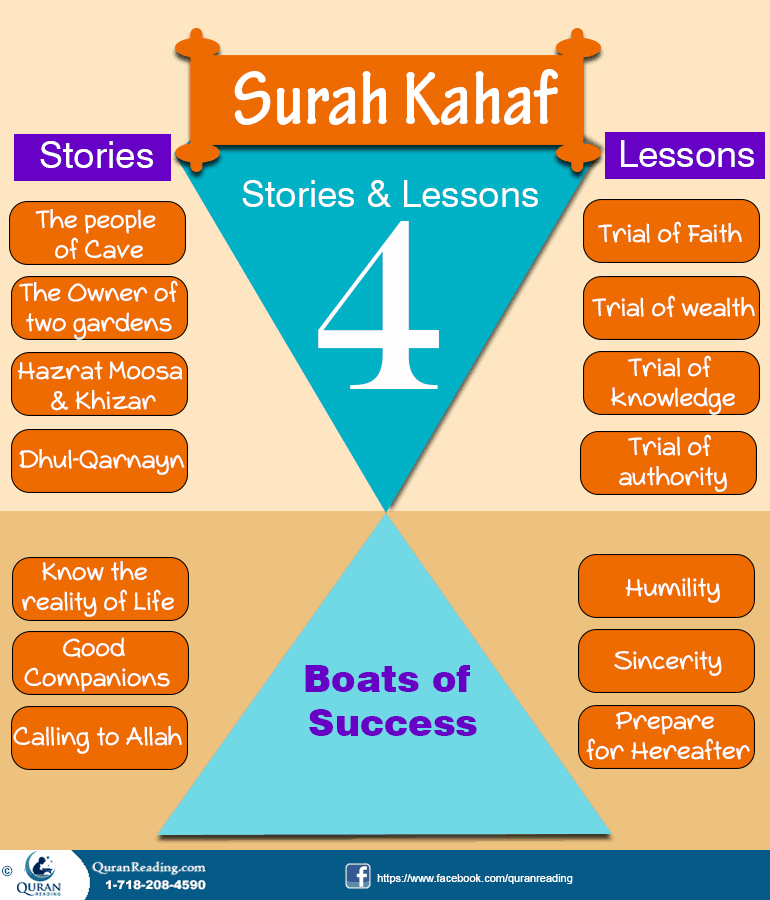 The first story that is mentioned in the Surah is the story of the men of cave. They were the people who were believers and lived in a country of non-believers. Thus, when they noticed that people will threat their lives because of the faith, they leave the city and go to a cave for the sake of Allah and their faith. Thus, there Allah Almighty bestowed sleep over them and when they woke up from their sleep, by that time all the people of their city had become believers. Thus, this story shows that when a person puts his or her belief in Allah Almighty, He always comes to their rescue and helps them in easing their difficulties.

Lesson – The lesson to learn from this story is that Allah Almighty puts the faith of a person to trial. When Allah Almighty puts the faith to trial and when a believer is steadfast in his or her faith, then Allah assists them in ways that are beyond comprehension. Moreover, the story also gives the lesson that a Muslim must always remain in the company of people who are good and righteous. The men of cave were all righteous, thus, their being together is one of the factors that attracted the mercy and assistance of Allah Almighty. Thus, a Muslim should be steadfast in his or her faith and remain in the company of good people, as is mentioned in Quran:

“And keep yourself patient [by being] with those who call upon their Lord in the morning and the evening, seeking His countenance. And let not your eyes pass beyond them, desiring adornments of the worldly life, and do not obey one whose heart We have made heedless of Our remembrance and who follows his desire and whose affair is ever [in] neglect.” (18:28)

The second story in the Surah is a person who was the owner of two gardens and was wealthy and rich in every regard. However, his wealth lead him astray and he started doubting his faith, as a result of which Allah Almighty deprived him of all the worldly artifice and bounties, which made him realize the transients nature of the things of this world but by then it was too late for him.

Lesson – From this story also a Muslim can learn two lessons. The first lesson is that all the wealth is also a test from Allah Almighty. Therefore, to those whom He grants, He is actually testing them whether they will be grateful to Him or not. Secondly, a Muslim must also learn the lesson that the things of this world are all temporary and transient, therefore, when they are available one must thank Allah and spend on the ones who don’t have these worldly pleasures available to them. In Quran, Allah Almighty perfectly explains the condition of the worldly things:

“And present to them the example of the life of this world, [its being] like rain which We send down from the sky, and the vegetation of the earth mingles with it and [then] it becomes dry remnants, scattered by the winds. And Allah is ever, over all things, Perfect in Ability.” (18:45)

The third story mentioned in Surah Kahaf is of Hazrat Musa (AS) and Hazrat Khizar (AS). When Hazrat Musa (AS) thought that no one in this world had more knowledge of things than him, then Allah Almighty sent him to meet Hazrat Khizr, who throughout the story proved that he knew more than Musa (AS).

Lesson – The lesson to be learnt from this story is that knowledge is not something, which one should be proud of, rather, having knowledge of things should teach humility to a person and one should know that there is always someone who is more knowledgeable and has a better understanding of things than one’s own self.

The fourth story that Allah Almighty mentions in Quran in this particular Surah is the story of great king Dhul-Qarnayn who travelled all across the world to help the people who were in need and spread good wherever he went. He was the one who provided relief to people from the menace of Gag Magog.

Lesson – The lesson to be learnt from this story is that power is also a gift from Allah and to those whom He gives power; He tests them by doing so. Therefore, those who have power over and compared to others should use this power to do good and make the lives of other easier and fight evil as well.

In a nutshell, Surah Kahaf is one of the renowned Surahs of Quran. Besides the special rewards and benefits that come from its recitation, an understanding of its content can also help a Muslim extract valuable lessons that can help in shaping one’s life towards the path of righteousness.