Marriage is one of the biggest decisions that a person makes in life. This decision has a direct and grave impact on the way future life of the person turns out to be and is also a major contributor to the happiness of both the partners involved in the relationship. After tying the matrimonial knot, the life of two people does not remain the same, therefore, the decision needs to be taken after proper considerations. 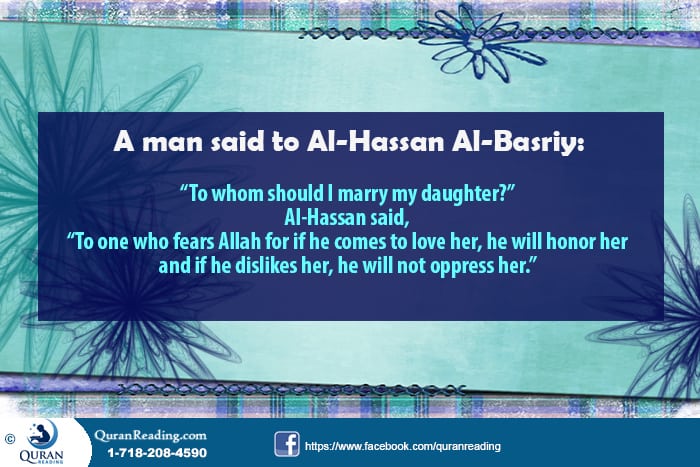 Among different other considerations, the most crucial and important consideration is the selection of the marriage partner. Islam is one of the major proponents of the right of selection of partner and wants its followers to start this new journey of their life with the right partner. Keeping this important aspect of society, today, The Online Quran Reading Academy has decided to put light on the topic pertaining to the selection of life partner in context of Islamic teachings:

The general misconception about Islam is that it is a religion that does not allow the partners to know and see each other before marriage, thus the marriages that take place among Muslims are all arranged where the parents of both the partners make the decision without the permission of the children to be married. This conception is wrong and Islam gives proper right to both the partners pertaining to selection.

In addition to the general provision of right of selection as a marriage partner, people argue that Muslim women have less freedom in this regard as compared to men, this is also a misconception and Islam gives proper right to women to show their consent with regards to their partner. Allah Almighty said about this in Quran in the following way:

“Do not prevent them from marrying their husbands when they agree between themselves in a lawful manner.” (2:232)

This ayah of Quran clearly explains the freedom of selection of a life partner that Allah Almighty has provided to women. Moreover, from this ayah it also becomes clear that no one is allowed to force women in not marrying the partner which they wish to marry and similarly they cannot be forced to marry someone which they do not wish to marry. Hence, the concept that in Islam marriage of women is dependent upon the will of parents or male members of the family is wrong and they have complete freedom in this regard from Allah Almighty.

Like women, men also have the freedom of selecting a partner for marriage. Prophet Muhammad (PBUH) said in this regard:

“When one of you seeks a woman in marriage, and then if he is able to have a look at whom he wishes to marry, let him do so.” (Dawood)

From this hadith of Prophet Muhammad (PBUH) it is clear that there is no compulsion on men for not seeing the women they are going to marry. However, the one thing that should be understood in the light of this hadith is that for a man to see a woman, he or she must have the willingness of getting married to the women he is about to see beforehand. Therefore, just seeing women without the willingness of getting married is not allowed.

Besides the freedom for the selection of a partner, the second tenant of getting married in Islam is the selection criteria which has to be followed in marrying a person. Islam is a religion of purity, spirituality and height of character, therefore, there can be no doubt in this regard that the selection criteria for a marriage partner is the character of the person above everything else. Allah Almighty says in Quran:

Therefore, seeking purity should be the primary objective when selecting a partner for marriage. For both Muslim men and women it is imperative that they find pure partners for marriage, so that the foundation for the relation could be laid upon purity.

“A woman may be married for four reasons: for her property, for her rank, for her beauty, and for her religion (and character), so marry the one who is best in the religion and character and prosper.” (Bukhari)

This haidth of Prophet (PBUH) makes it evident that above everything the one thing that should be considered while getting married to someone is his or her character. The character or piety of a person is more important than the property, than the rank and beauty. Although this haidth is directed towards selection of women, however, if women were to select men, they could also follow the same criteria and select men on the bases of their character and not their wealth.

Moreover, after the selection of the partner, one must have a true intention of living a good and chaste life in order to gain reward from Allah as well. Prophet Muhammad (PBUH) said:

“Three groups of people Allah obliged Himself to help them: Mujahid in the cause of Allah, a worker to pay his debt, and the one who wants to marry to live a chaste life.” (Tirmidhi)

In a nutshell, from the aforementioned discussion it becomes clear that pertaining to selection of marriage partner, Islam has given freedom to both the genders to marry the person of their liking. Moreover, Islam also asserts that in marrying someone, the one thing that should be considered above everything else is the character and righteousness of the person.