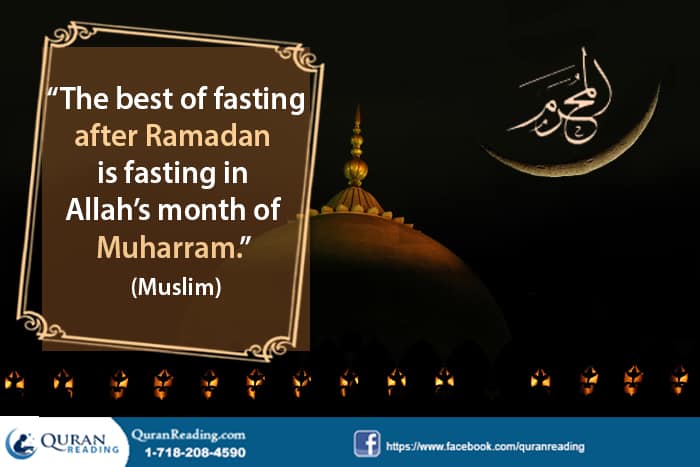 The lines below discuss the blessings of the month of Muharram by discussing the sanctity and repute it has in the Islamic calendar in the light of Quran and the Sunnah of Prophet Muhammad (PBUH).

Muharram is one of the months that has found its implicit mention in Quran as well. Pertaining to the sacred months, Allah Almighty says in Quran:

“The number of months in the sight of Allah is twelve (in a year) – so ordained by Him the day He created the heavens and the earth; of them four are sacred; that is the straight usage. So wrong not yourselves therein and fight the pagans all together as they fight you all together. But know that Allah is with those who restrain themselves.” (9:36)

There are narrations in hadiths of Prophet Muhammad (PBUH) that tell that out of the four sacred months mentioned in this ayah, one is Muharram. Thus, from ayah the sanctity and greatness of the month of Muharram cannot be denied or ignored. Moreover, the other thing to notice in this ayah is the fact that Allah Almighty clearly states that Muslims should not wrong themselves in these sacred months. It means that one should refrain from all sorts of evils possible as they punishment against them could increase substantially.

The blessing of this month in the light of this ayah is the fact that if the month is sacred then the ordinary good deeds or the deeds recommended by Allah are committed in this month, then there reward is also to be greater compared to doing those deeds in other months in normal days. Therefore, in no way should a Muslim consider leaving a small good deed in this month, neither must he or she consider undertaking any minor sin as the rewards and punishments are probable to increase exponentially for the respective deeds.

The other important thing for which Muharram is considered sacred and is given greater previlage is the fasting in this month. In one of His hadiths, Prophet Muhammad (PBUH) said:

“The best of fasting after Ramadan is fasting Allah’s month of Muharram.” (Muslim)

The day of Ashoora, which is the tenth day of Muharram, is also a significant factor for which the month is known. There is a whole narration that tells about the importance of the day of Ashoora and how it is a unique opportunity for a Muslim to earn greater reward in this day.

“The Prophet (PBUH) came to Madina and saw the Jews fasting on the day of Ashoora. He said, ‘What is this?’ They said, ‘This is a righteous day, it is the day when Allah saved the Children of Israel from their enemies, so Moosa fasted on this day.’ He said, ‘We have more right to Moosa than you,’ so He fasted ont hat day and commanded (the Muslims) to fast on that day.” (Bukhari)

From the hadith it is clear that the day of Ashura was celebrated prior to the advent of Islam. The connotation it had at that time referred to it being the day when the Children of Israel were lead to liberation by Prophet Moses (AS) against the tyranny of Pharaoh. Therefore, the day had been sacred since then to the time of Islam.

With the arrival of Islam Prophet Muhammad (PBUH) also acknowledged the sacredness of this day and fasted on this month and encouraged the followers to also fast on this day. Ibn Abbas (RA) also narrates of the Prophetic tradition of fasting on the day of Ashoora in the following way:

“I never saw the Messenger of Allah so keen to fast any day and give it priority over any other time than the day of Ashoora and the month of Ramadan.”(Bukhari)

The hadith shows the keenness of Prophet Muhammad (PBUH) pertaining to fasting in Muharram. From the narration it is clear that He was as keen for fasting on the day of Ashoora as keen He was when it came to fasting in the days of Ramadan.

Pertaiing to the virtues or blessings that come with fasting on the day of Ashoora Prophet Muhammad (PBUH) said in a hadith:

“This fast is a compensation for the (minor) sins of the past year.” (Muslim)

Therefore, if a Muslim wishes to achieve expiation from the minor sins of the previous year, then he or she must consider fasting on the day of Ashoora and be free of minor sins.

“One who generously spends on his family on the day of Ashora, Allah will increase (his provision) for the whole year.” (Baihaqi)

Therefore, whether it is expiation from sins or increasing the provisions for the coming year, a Muslim must consider fasting on the day of Ashoora, which very rightly is the greatest blessing brought forward by the month of Muharram.

In a nutshell, the month of Muharram in addition ot being the first month of the Islamic year is also a month that is sacred and the jewel in its crown of sacredness is the day of Ashoora on which if a Muslim fasts it brings humungous benefits and blessings.