It is a part of Muslim belief to believe in the occurrence of the judgment day. The belief in this day is related with the life hereafter. When a Muslim believes that there is a life hereafter, then he or she also agrees to the fact that with the end of time there is going to be a judgment day where all people will be judged on the bases of their deeds and then as per those deeds they will enjoy punishment or reward in the eternal afterlife. 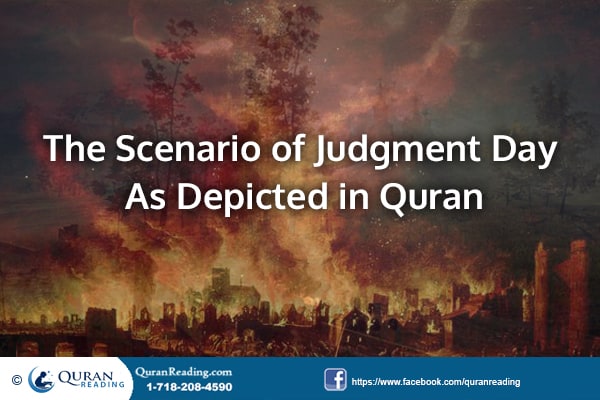 The judgment day is a transitory day when human life of this world would end and all will move on to their respective status in the life hereafter. In addition to emphasizing on the inevitability of the judgment day, Quran also gives a picture of the way it will take place and what will be the reactions of people once it occurs. The lines below discuss the scenario of the judgment day as depicted in Quran.

The Blowing Of Trumpet:

“The trumpet is blown and those in the heavens and those in the earth swoon away, except those Allah wills. Then it is blown a second time and at once they stand upright, looking on. And the earth shines with the Pure Light of its Lord; the Book is put in place; the Prophets and witnesses are brought; it is decided between them with the truth; and they are not wronged. Every self is repaid in full for what it did. He knows best what they are doing.” (39:68-70)

This ayah gives a clear depiction of how the judgment day will start. The day will start when the trumpet blows for the first time. When the trumpet blows, the first reaction to it would b all the all that is in heaven and earth will faint, meaning that the life on it would end, except for those who Allah wants to live. When the second time the trumpet will blow, all will rise and all will come into an order that marks the commencement of the judgment. Thus, when all are in line, the court of Allah will be set where the Prophets will be present and the Books will be placed and after that deeds will be judged and a just reward will be imparted on them.

The Reaction of Wrongdoers:

For those who have done good in the worldly life, for them the judgment day will be like a blessing where they will be dealt with justly and paradise will be given them as a reward, however, the story wont be the same for those who don’t believe and lived all their life in sin without any progress towards righteous and truthfulness. In Quran Allah Almighty says about such people in the following way:

“They will say, “Alas for us! Who has raised us from our resting-place? This is what the All-Merciful promised us. The Messengers were telling the truth.” (36:52)

This ayah shows the reaction of all those people who remained in denial of the judgment day. When on that day all will be raised from their graves and they will rise to see the scenario, only then would they realize that all the Messengers were telling the truth and it is that time about which Allah promised.

In addition to seeing the promise of Allah being fulfilled, the wrongdoers will be full with the feeling of shame and would lament with the following reaction as presented in Quran:

It is clear from the ayah that the wrongdoers on that day will be full with frenzy and they would lament over the life of sin and oblivion they had lived when they were provided a chance. The wrongdoers will bite their hand and will lament on why did not they listen to the message of truth, why did not they follow the path of righteousness and why did they went into the company of such people who took them away from truth and caused all the misery they are about to face on the judgment day.

Every Man For Himself:

Such will be the scenario of the judgment day that no one will bother for anyone other than him or herself. Therefore, the thought that at that day any relation from friends or family would help anyone is wrong. In Quran, Allah Almighty says:

“When the Deafening Blast comes, the Day a man will flee from his brother and his mother and his father, and his wife and his children: on that Day every man among them will have concerns enough of his own.” (50:33-37)

This ayah clearly explains that on that day no one will come to help of anyone, rather every person will be on his or her own without any assistance from anyone. Such will be the judgment day when only the deeds and acts of a person will predict his or her future.

In a nutshell, a Muslim must realize that the judgment day is as inevitable as death. Therefore, in order to be among the one who view judgment day as a proclamation of good news, a Muslim must follow the instructions of Islam to be prepared for Judgment day and do as much good deeds in this world as possible.