Shawwal is the 10th Islamic month which comes after Ramadan. Eid-al-Fitr comes on 1st of Shawwal for Muslims. As we Muslims fast during the month of Ramadan from dawn to dusk and do not indulge in any inappropriate activities during the whole month of Ramadan. Fasting for six days, after Ramadan, is known as fasting for Shawwal. It is not wajib or compulsory, but it is Sunnah which will get you extra good deeds but no harm if you skip it.

Our beloved Holy Prophet (SAW) used to fast frequently before and after the highly blessed period of Ramadan, especially after Eid-al-Fitr that is in the Islamic month Shawwal. It is advised to Muslims to fast for the six days of Shawwal after Ramadan because it is equivalent to having observed fasts for a lifetime. These fasts can be observed in a row consecutive or with gaps in between however the sooner they are done, the better it is. It is narrated in hadith in these words: “Whoever fasts Ramadan, then follows it with six days (of fasting) of Shawwal, it as if he fasted the entire year” (Muslim) 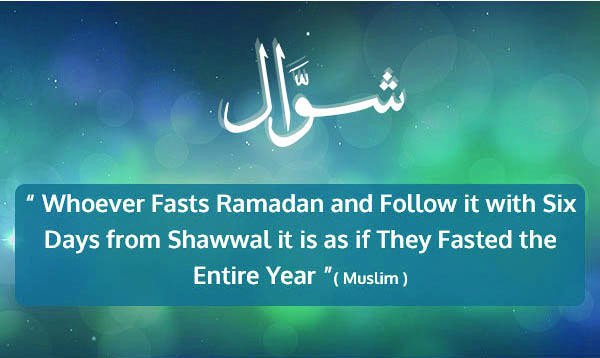 Fasting in the Islamic month Shawwal is one of those noble deeds making one come closer to the Almighty Lord resulting in achievement in both worlds. In Quran, it is stated that: “O you, who have believed, fear Allah and seek the means [of nearness] to Him and strive in His cause that you may succeed” (Quran, 5: 35). Fasting for 6 days of Shawwal after celebrated Eid-al-Fitr for three consecutive days proves that a believer is humble and highly grateful to Allah Almighty for all the blessings received during the Islamic festival. Pursuing the habit of fasting a soon after Ramadan is a means of giving thanks to Allah Almighty for the blessings that we have received in the holy month Ramadan.

It is considered that the practice of fasting in Shawwal could serve as a wonderful way of assisting those of us who may have missed some fasts during Ramadan, as a result of illness, menstruation or traveling to make up for lost fasts. It is highly recommended to fulfill the missed fasts of Ramadan as soon as possible since this is an obligation and debt owed to Allah and this takes superiority over voluntary fasting.  The month of Shawwal is the start of the Hajj season and a time during which we propose farewell for our relatives and friends who have decided to respond to the invitation by their Lord Allah Almighty to undertake the sacred journey of the pilgrimage.

By fasting in 6 days of Shawwal is a sign that one has increased faith in its heart than normal Muslims, it proves that this act results in attaining the Love of the Most Merciful and becoming prominent in front of Him. It is an exceedingly blessed action that is not to be taken lightly. Although it is Sunnah Mustahab, yet it comes up with the fulfillment of high morals of virtue and provides countless achievements for a believer. May Allah Almighty accepts our fast during the holy month of Ramadan and also give us the strength to fast in the month of Shawwal. Ameen!