The entire world knows about and follows the proverb, “Time is money”. The life of a scholar at school or at college depends greatly on scheduling its course work and making a good time table in order to succeed in its exams. Same way, every other person, irrespective of its walk of life, recognizes the great significance of every passing moment and needs to get the best out of it.

The Islamic point of view regarding Time is also the same, but it follows a greater implication than just succeeding this world. For every true believer knows that life on earth is temporary and its eternal accomplishment lies in terms of pleasing Allah SWT and living its life according to His Commandments. The Almighty Lord says in the Holy Quran in Chapter Al-Asr:

Note – To know how to correctly read verses in Arabic, you are advised to learn to read Quran in Arabic with tajweed.

The above mentioned Ayahs explain the worth of time in life of a Muslim. The Creator of the world of the worlds declares time as a great measure of one`s success or failure. The Exalted One says that with every advancing moment of existence, human has a great warning that is associated with it. But there are also those who will be victorious in the afterlife: those who have complete faith in Allah and His Messenger ﷺ; live a life of morality and uprightness; and preach each other towards adoption of honesty and serenity in all matters. It is highly imperative to realize the value of all these four commandments which Allah SWT has prescribed for His servants, for these are the words of the Almighty and are deemed as one`s way of evaluation of triumph or disappointment.

Surah Al-Asr is one of the earliest Chapters of Quran Majeed, which was revealed in Makkah, and is also the second shortest Section of Furqan e Hameed after Surah Al-Kawthar. Despite having just three verses, it is considered to be the essence of the entire Holy Quran, as it is a tremendous means of salvation. This Surah brings one`s focus towards four basic Islamic ideologies and beliefs, which result in attaining a state of rectitude and decency in all issues of life. 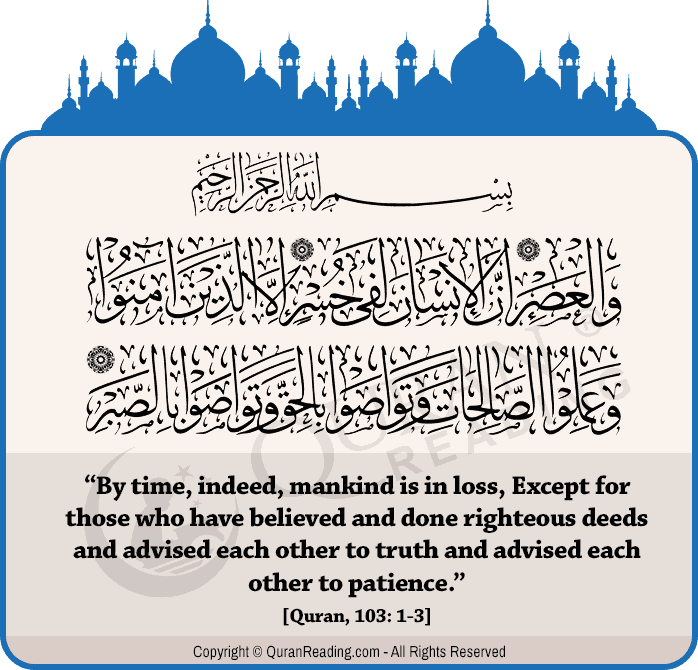 These four core principles are described as under:

The very first requisite for entrance to the circle of Islam is that one should have complete trust in the Existence of Only One God. Tawheed (Monotheism) has always been the primary aim of sending Prophets into this world. Time after time, whenever people forgot about the Almighty as being the Sole Worthy of worship and veneration, the Creator of the Universe rose among them His Apostle so as to redirect them towards His remembrance.

Being among the initial Chapters of the Holy Quran, Allah, the Most Exalted, through this auspicious Surah of Al-Asr, is directing the Arabs to leave Polytheism and come towards His memory and adulation only. The Almighty Lord says in Furqan e Hameed:

“Indeed, your Lord is Allah, who created the heavens and earth in six days and then established Himself above the Throne. He covers the night with the day, [another night] chasing it rapidly; and [He created] the sun, the moon, and the stars, subjected by His command. Unquestionably, His is the creation and the command; blessed is Allah, Lord of the worlds.” [Quran, 7: 54]

Allah SWT has repeatedly mentioned about His unmatched Command over everything in His Sacred Book, so that its readers could know about their true purpose of existence, i.e. to perform adoration and worship of Him only.

Having absolute devotion to the Almighty God, one also needs to live its life according to the instructions given by Him. As “Actions speak louder than words”, therefore, a true believer also has to fulfill its obligations that are prescribed by Allah SWT. It includes adherence of a Muslim to both of its religious and other moral responsibilities as well as leaving all what has been forbidden in the Religion of Peace. The accomplishment of virtuous actions in Islam includes carrying out Salah, fasting, Zakah (charity) and Hajj etc. The Almighty Lord says in the Holy Quran:

“But they who believe and do righteous deeds – those are the companions of Paradise; they will abide therein eternally.” [Quran: 2: 82]

It means that faith without action is invalid, and a true Muslim has to perform all the moral acts as laid down in the Hallowed Manuscript of Allah.

After setting one`s own life on the right track with having strong conviction in Allah Almighty and carrying out righteous actions, one also needs to preach fellow Muslim brothers and sisters towards truthfulness and honesty. Truth here could be taken in terms of advocating the word of God in front of others without any hesitation. The Almighty Lord says in Furqan e Hameed:

The above mentioned Ayah indicates towards not hiding the exactness of Islamic beliefs or mixing it with fabrication of reality. Any kind of dishonesty in Islamic instructions makes one accountable for its negligence in the hereafter as Allah SWT has greatly emphasized in this Surah, i.e Al-Asr about passing of time and its adverse effects.

A true disciple of Islam firmly believes that the worldly life is nothing but just an interim stay of trial and test. It is every Muslim`s duty not only to remain patient in times of adversity but also preach others to keep calm and believe in Allah`s Help. One also has to advocate others about patience in grievances and those hard times of this life are temporary in nature and that they will be followed with great times of eternal peace and tranquility in the hereafter. Allah SWT says in the Holy Quran:

“And seek help through patience and prayer, and indeed, it is difficult except for the humbly submissive [to Allah]” [Quran, 2: 45]

Hence, the Almighty God has advised His servants to be patient in times of hardship to get His Assistance.

In short, Surah Al-Asr stresses greatly on the importance of time and its implications on life of a Muslim, which lies in passing time with respect to above mentioned core principles of Islamic faith.