Surah Rahman is one of the imperative and reverend Surah of Quran that enumerates dive blessings of Allah Almighty that He has bestowed upon the human kind. The Surah entails the innumerable favors of sole worshiping Lord encompassing favors, wrath of Allah in the form of Resurrection Day and His eternal omnipotence.

The verse “denial to the bounties of Lord” is an explicit crux of Surah Rahman reiterated approximately thirty times in order to emphasis the majestic wonders of Allah Almighty.

Humans are fragile and susceptible to turbulence and fall easily to the waves of ordeals hence surrender to the worldly despair. Allah wants humans to remember the entire blessings, powers, and feasts He has enlightened humans with to complicate with the purpose of creation i.e. to worship Him and be thankful.

“And whatever you have of favor – it is from Allah. Then when adversity touches you, to Him you cry for help.” [Quran 16:53]

Allah Almighty is the beseeching deity for mercy and refuge from the pernicious evils of Satan, which is an open enemy of humankind. The Surah starts with the praise worthy name of Allah i.e. “Rahman” and to its explanation is the entire Surah encapsulated in His bounties and favors. Rahman is one of the attributes of Allah the Exalted one that entails Him being exclusive, unique, unparallel, unprecedented, and equivalent meaning Merciful and Most Gracious.

Denial to all the sublime and subtle favors of Allah Almighty trapped a man in the devilish customs eventually a defeat in life and hereafter. 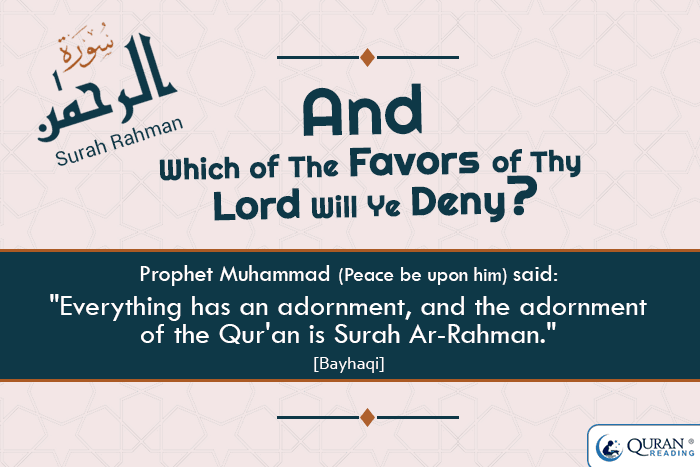 1. Existence and purpose of existence

The vitality of Surah lies in the benevolence of merciful Lord who creates a human from a clot of blood from tiny sperm and then blessed in him a life to worship Allah. The word “insaan” that Allah has described in the starting verses designated “humankind” rather Muslims. The creation of humans is a wonder whose microcosm and macrocosm is itself an unequal blessing to be thankful for the rest of one’s entire life.

“Travel through the land and observe how He began creation. Then Allah will produce the final creation. Indeed Allah, over all things, is competent.” [Quran 29:20]

The blessing of Allah does not stop here but along creation, He has imparted the human race with the sense of speech and comprehension towards the teachings of Quran. Allah clearly has stated in sacred revelation that “this is He who has sent the book of Mercy and teach humans how to read Quran to be on righteous path.”

2. Scientific Revelations to Ponder on Eternal Wonders of Allah

Apart from the “Ala” connotation in the reiterated verses, referring to the widespread bounties of Allah Almighty the Surah discloses the scientific implications of various eternal wonders of Rab ul Aalameen. The solar system and purpose of moon and sun has been unfolded since ages ago but the advent of technology has cemented the sacramental purpose behind their existence. Imagining life without sun and moon is meaningless with no warmth and zest.

Moon and sun are the symbols for schedule for Islamic rituals like Hajj and festivity of Eid along the timetable for Salah, their gone-away trajectories shed light on the ultimate reality that there exist death and every living soul ought to taste for accountability purpose in the realm of God.

The miracle of fresh and salty water in separate state is let alone sufficient to legitimize the Grandeur and Exaltation of Allah Almighty. He has created a sea of two different color of distinct taste and has ordered them not to mix as narrated in Quran:

“And it is He who has released [simultaneously] the two seas, one fresh and sweet and one salty and bitter, and He placed between them a barrier and prohibiting partition.” [Quran 25:53]

This exemplifies the purpose of human creation to refrain from prohibited deeds and follow the path of Lord hence not to fall astray.

Along blessings, Allah has instilled the Khawf of Dooms day in the hearts of those who worship Him. The fear of Resurrection is the scale that makes a man “Mutaqi” so that He with an open and piety heart worship lord by relinquishing the things He has asked to stay away from. At the day of Resurrection every one will be presented in front of Allah for accountability of deeds including all those who are in state of constant denial that how they will reborn from ashes.

“And he presents for Us an example and forgets his [own] creation. He says, “Who will give life to bones while they are disintegrated?” Say, “He will give them life who produced them the first time; and He is, of all creation, Knowing.” [Quran 36: 78 – 79]

4. No Diminution to The Dignity of God

The core inscription of Surah Rahman is “Dignity of God that has no diminution.” The day of Qyamah will come and the mountains will turned into ashes, people will be presented in the realm of Glorious one but the grandeur and magnanimity of Allah Almighty will remain the same.

Allah though has created human and Jins to worship Him but in fact He does not need it as He has the echelons of Angels who are in continuous prostrating state emphasizing that He is the one and will be the one till end hence fear Thy lord and seek His forgiveness.

In nutshell, Surah Ar Rahman comprehends the manifestation of Allah Almighty explaining the fruits and bounties of Lord that is evident from start of the verse until the very end of Surah that is the reason that it has entitled with the adornment of Quran as narrated in Hadith:

“Abdullah ibn Mas’ud reported that the Prophet Muhammad (Peace be upon him) said, “Everything has an adornment, and the adornment of the Qur’an is Surah Ar Rahman.” [Bayhaqi]