The common meaning of a term “Taqwa” known to us all is “piety or the fear of Allah Almighty”. But this is not the complete and exact interpretation of this terminology. The Creator of the universe has mentioned as being “merciful” to all His mankind repeatedly in the Holy Quran, and without the shadow of the doubt, He is more forgiving and compassionate than a punisher. He, Who pardons our sins each time we pray to Him, indicates towards His loving nature. The obeying of the great Lord is not confined to only fulfilling religious actions, but being moral in every aspect of life, as observed in the following verse of the Holy Quran:

“O, you who believe! When you hold secret counsel, do it not for sin and wrong-doing, and disobedience towards the Messenger (Muhammad SAW) but do it for Al-Birr (righteousness) and Taqwa (virtues and piety); and fear Allah unto Whom you shall be gathered.” [Quran, 58:9]

It is said to be one of top most traits of a Muslim`s character, which indicates that Taqwa means a lot more than just piousness: it is the combination of our beliefs, self awareness and attitudes. It is a reminder to stay on the path of uprightness, decency and knowing the difference between right and wrong. It is a common misconception that only Muslims have this quality, which is not true, instead, if a non Muslim is doing good deeds, they also have this feature in their personality. It is about having God consciousness in terms of knowing and obeying all His orders including not only fearing Him but also acting on all His directions. 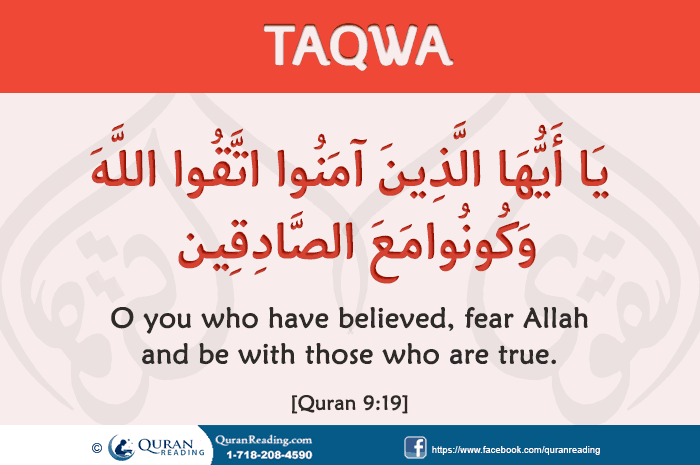 Let us discuss some of other useful ways in which one can develop the habit of this great virtue.

Reminding Yourself of Allah`s Presence

One of the very first and most effective causes of obtaining Taqwa is the reminder of the existence of Almighty, which is considered as the heart of this good quality by many Muslim scholars. It makes a person aware of the consequences of actions done: it not only takes account of fulfilling religious duties like offering salah, paying Zakah etc. but also avoidance of many of the social evils, e.g. a Muttaquee (person having Taqwa) person will never try to snatch someone else` rights.

“And if you divorce them before you have touched them and you have already specified for them an obligation, then [give] half of what you specified – unless they forego the right or the one in whose hand is the marriage contract foregoes it. And to forego it is nearer to righteousness. And do not forget graciousness between you. Indeed Allah, of whatever you do, is Seeing.” [Quran, 2:237]

First, the above Ayah tells about correctness of act, second it stresses on the fact that Allah Almighty is aware of everything. So, it is understood that this prompt of Allah`s presence leads towards gaining morality.

“Indeed, those who are al-Muttaqoon [the pious] – when an impulse touches them from Satan, they remember [Him] and at once they have insight.” [Quran, 7:201]

This Quranic verse is the testimony of that fact that pious Muslims get enlightenment through remembrance of the Creator of universe.

Being Patient in Adversity

Composure and serenity are one of the most lovable acts near the Architect of universe, Who has mentioned about these virtues frequently in the Holy Quran, as seen in the following stanza:

“Righteousness is not that you turn your faces toward the east or the west, but [true] righteousness is [in] one who believes in Allah , the Last Day, the angels, the Book, and the prophets and gives wealth, in spite of love for it, to relatives, orphans, the needy, the traveler, those who ask [for help], and for freeing slaves; [and who] establishes prayer and gives zakah; [those who] fulfill their promise when they promise; and [those who] are patient in poverty and hardship and during battle. Those are the ones who have been true, and it is those who are the righteous.” [Quran, 2:177]

The notable matter here is that patience is linked to gaining righteousness, i.e. Taqwa. It can also be observed that decorum of a Muslim is not only affected by praying and believing in God, but also satisfying many other important social responsibilities and most importantly being true to oneself. The lack of complaint in times of hardships teaches us to accomplish our religious duty to relying only on Allah, Who has promised His help for the patient ones.

“O, you who have believed, seek help through patience and prayer. Indeed, Allah is with the patient.” [Quran, 2: 153]

As prayer and endurance are mentioned together, it shows that it is important trait of true Muslims.

Since Taqwa is far more than just fears, and includes striving for perfection of individuality, so one should take help from modesty and humbleness by not considering oneself better than rest of people.

“So by mercy from Allah, [O Muhammad], you were lenient with them. And if you had been rude [in speech] and harsh in heart, they would have disbanded from about you. So pardon them and ask forgiveness for them and consult them in the matter. And when you have decided, then rely upon Allah. Indeed, Allah loves those who rely [upon Him].” [Quran, 3: 159]

All of us Muslims believe that Muhammad (PBUH) is most perfect person to have ever lived on earth, and in above Quranic verse, Allah has indicated that the Prophet`s (PBUH) success in spreading Islam was due to His humility which made him a righteous and respectable man. So we can also benefit from it by respecting others to achieve decency in our behavior.

Souvenir Death and Day of Judgment

Reminding ourselves of death the final day of verdict is one of the most significant ways to adopt piousness and morality of behavior, for it makes us shun from sins and immoral conducts. The thoughts of world being a temporary place to live in forces us to avoid the worldly pleasures and delights, instead we get contended with whatever we have and thank Allah for all His blessings.

“Every soul will taste death. And We test you with evil and with good as trial; and to Us you will be returned.” [Quran, 21:35]

So, one should always keep real life (hereafter) before everything in this world to become dutiful and virtuous.

The teachings of the Holy Book is indeed the best way to get knowledge about various issues and to beautify one`s personality and get enlightened. The significance of reading and learning the Quran is evident from famous incident when Hazrat Umar (R.A), who was going to Kill (God forbids) the Messenger of Allah, became Muslim on the same day when He listened to the recitation of the Book of Almighty.

“Recite the Holy Qur’an as much as we can, for It will come as an intercessor for its reader on the Day of Judgment.’ [Muslim]

The above mentioned Hadith says that Quran will act as a moderator for its reader at the Day of Judgment, which shows that the one understand writing of the Sacred Book, gets sufficient wisdom for realization of morality and righteousness.

So, to conclude, we can say that, Taqwa is similar to strategies, plans and policies of an organization, which enable it to realize its goals and objectives (success in the Akhirah in this case).