The Religion of Islam puts great emphasis on making effort and earning one`s own living rather than going out ask others for it for no reason. It also devises a well balanced Muslim society for all where everyone gets its due share. Those who are rich are directed to help out others in need through an obligatory action of Zakah (Charity). Allah SWT says in the Holy Quran:

“And from their properties was [given] the right of the [needy] petitioner and the deprived.”

The above mentioned Ayah Kareema tells us about the great standing of believers who have enough wealth in the worldly life and those who take care of the disadvantaged people through it. The Holy Prophet ﷺ has described the condition of actual poor people in the following words.

“The poor person is not the one who goes round the people (begging them) and is dismissed with one or two morsels, and one or two dates. The poor is that who has not enough (money) to satisfy his needs; his condition is not known to others that they may give him something in charity, nor does he beg of people.” (Bukhari and Muslim)

This Saying of Hazrat Muhammad ﷺ clearly explains the true state of a poor person. The concept of poverty in the Religion of Peace depends upon the fact how much less one owns in order to suit its daily life necessities. A deprived individual is the one who does not make its current situation of scarcity public in front of others and avoids pleading for fulfillment of its requirement from others. 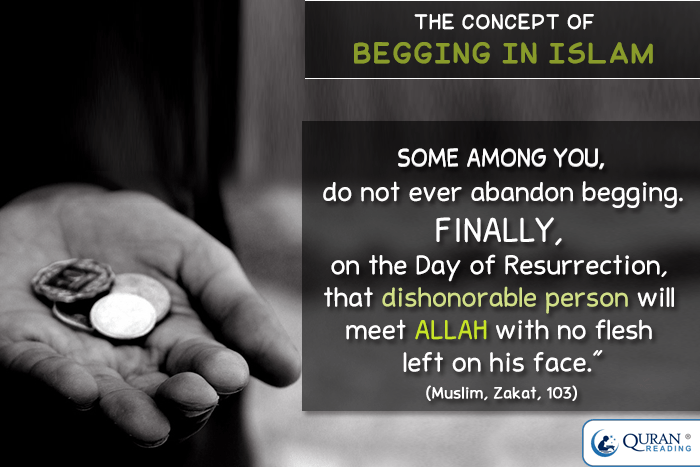 In order to further elaborate this delicate matter of begging in Islam, let us explain it further in the light of Quran and Ahadith:

Self-Contentment Defying the Act of Imploring

Among many signs of a true believer is that it never complains in front of the Almighty Lord, remains thankful to Him and always maintains a state of self-satisfaction with whatever it has got. This is because a rightful disciple of Islam knows about the temporariness of life on earth which leads to its contentment with everything Allah has bestowed upon it throughout its existence. The Gracious God says in His Sacred Scripture:

“[Charity is] for the poor who have been restricted for the cause of Allah, unable to move about in the land. An ignorant [person] would think them self-sufficient because of their restraint, but you will know them by their [characteristic] sign. They do not ask people persistently [or at all]. And whatever you spend of good – indeed, Allah is Knowing of it.” [Quran, 2: 273]

One can obviously observe from the previously stated Quranic lines in which the Creator of the universe appreciates those of His servants who do not go out and ask others for their needs because of their self-restraint and being gratified with all they have. For these kinds of people, Allah SWT has instructed the prosperous ones to help them with Zakah as they will conceal their misery through patience but they are the ones who actually in need of Charity.

Accepting Goods Given As A Gift

It is clear from the earlier discussion that the believers do not publicly announce about their position of despair in front of others so that they could get aided; instead they keep it between them and their God. But it is also not advisable to refuse any offer from someone else who gives it as a present to them. Rasulullah ﷺ once advised His Rightful companion, Hazrat Umar (R.A) on this matter as discussed in the below Hadith:

“The Messenger (PBUH) of Allah gave to `Umar ibn Al-Khattab some gift. `Umar said to him: ‘Messenger of Allah! Give it to one who needs it more than I.’ Upon this the Messenger (PBUH)of Allah said: He who begs the riches of others to increase his own is asking only for live coals, so let him ask a little or much ‘‘Take it; either keep it with you or give it as a charity, and whatever comes to you in the form of this type of wealth, without your being avaricious or begging for it, accept it, but in other circumstances do not let your heart hanker after it.’’ (Muslim)

Thus, the Apostle ﷺ of Allah permitted with the approval of the Almighty Lord to accept anything beneficial that is being given voluntarily without one having to ask for it. One is also not allowed to crave for something that is not being awarded to it as it will be considered as an act of begging under normal circumstances.

Islam has strictly forbidden from asking others for money or any other riches rather one has to earn its income by its own effort. According to a Prophetic (PBUH) Saying narrated by Abu Hurraira (R.A):

“It is better for one among you to bring a load of firewood on his back and give charity out of it (and satisfy his own need) and be independent of people, than that he should beg from people, whether they give him anything or refuse him. Verily the upper hand is better than the lower hand, and begin (charity) with your dependants.” (Muslim)

Therefore, anyone who has enough capacity that it can take care of its own issues should never ask others for affluence rather it should go out, become self-determining and make a living on its own so that it might even be able to aid others. In the end, Rasulullah ﷺ has regarded the charitable person being superior to the one that is being contributed. It means one should continue the good work of making donations to the poor for the sake of pleasing the Almighty Lord. Allah SWT says in the Holy Quran:

It shows that a believer is not allowed to keep away someone just because that person is asking for a favor. This is because one does not actually know about the actual reason of the beggar behind its request. Thus, one should treat them in a pleasant manner, give them charity and avoid from offending them.

Permissibility Of Begging Under Special Conditions

Asking for material goods from the rich is not allowable if this act is being done just for the sake of accumulating wealth for personal gains. This kind of deed is strictly prohibited by the Holy Prophet ﷺ for it is only a source of collecting money for quenching one`s thirst of greed.

“He who begs the riches of others to increase his own is asking only for live coals, so let him ask a little or much.” (Muslim)

The above mentioned Hadith eloquently explains about the serious consequences of asking for one`s self-indulgence in materialistic increase. But not every person is asking for something deliberately without having much reason behind doing so. The Messenger ﷺ of God has prescribed the act of requesting others` help under three particular circumstances which are described in the following Hadith:

Thus, there are three conditions under which the act of asking others is permissible beyond which it is forbidden: having promised a portion of money for the sake of settlement between two parties till it has been paid off; a miserable state of a person because it has lost all its capital and assets due to a natural disaster till it can sustain its life; and a person who`s dearth of wealth has been confirmed by three trust worthy individuals till that someone is able to make its situation better. It shows that Islam is not a rigid religion on the matter of asking others rather it gives enough room for it when there is no other way of survival.

In short, begging is not a desirable action according to the Religion of Peace, but only allowed in severe form of need. The rich also have the responsibility to search for such deprived people to help them through charity in order to relieve them from their misery.