In Islam prayers five times a day is an obligation upon every Muslim and second important pillar of Islam. It is the prayer that helps a Muslim differentiate him or herself from people of other beliefs when it comes to worshiping. Moreover, the prayers are a means of invoking Allah Almighty and seeking His attention.

“Indeed, those who believe and do righteous deeds and establish prayer and give zakah will have their reward with their Lord, and there will be no fear concerning them, nor will they grieve.” (2:277)

From the ayah it is clear that prayer is an obligation upon every Muslim which they have to offer in any case without any excuse. It is due to this imperativeness of prayers that Muslims parents teach children about prayer and show them the right way of offering prayers either by demonstrating in front of them, or by helping them with some book or Step by Step Salat app.

Muslims have five obligatory prayers to offer every day. The timing of these prayers is spread across the day which depends upon sun. The start of these prayers takes place with the prayer of Fajr that a Muslim is to offer before dawn. The lines below discuss the importance and significance of Fajr prayer under the light of different hadiths of Prophet (PBUH) and various verses of Holy Quran. 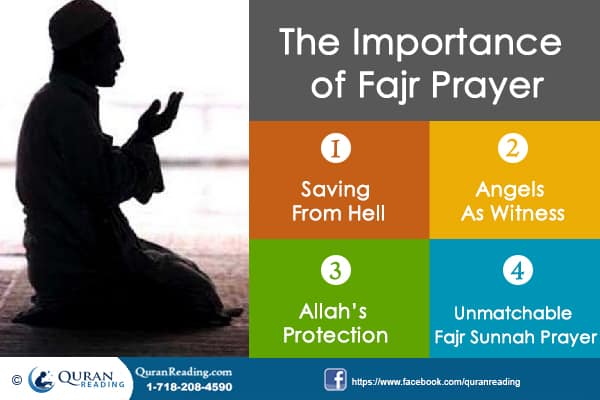 At a general level, Muslims offer prayer to submit to Allah Almighty and to show that they are His subjects and they remember and worship Him only. Moreover, the offering of prayers is also something that pleases Allah Almighty and on those whom He is pleased, He showers His blessings on them in this world and in the world hereafter. As Prophet Muhammad (PBUH) said in one of His hadiths:

This hadith clearly states that among Muslims whoever offers the Fajr and Maghrib prayer will not enter Hell. The thing to consider in this regard is that one does not get expiated from Hell by offering a single Fajr and Maghrib prayer, rather one needs to do it with regularity. Therefore, once a Muslim makes offering of Fajr prayer a part of his or her life, it increases their chances of entering paradise and avoiding Hell.

“Establish prayer at the decline of the sun [from its meridian] until the darkness of the night and [also] the Qur’an of dawn. Indeed, the recitation of dawn is ever witnessed.” (17:78)

The ayah clearly addresses Muslims to establish Fajr and Maghrib prayer, whilst mentioning that the prayer of Fajr is witnessed. This witnessing refers to the witnessing of angels about which Prophet Muhammad (PBUH) spoke in a hadith in the following way:

“There are angels who take turns in visiting you by night and by day, and they all assemble at the dawn (Fajr) and the afternoon (Asr) prayers. Those who have spent the night with you ascend to the Heaven and their Lord, Who knows better about them, yet asks, ‘In what condition did you leave My servants?’ They reply, ‘We left them while they were performing Salah and we went to them while they were performing Salah.’” (Bukhari)

From this hadith of Prophet (PBUH) it is clear that the angels who are sent down by Allah Almighty at night have to return to Him on the morning of the next day. When they reach the court of Allah Almighty and Allah inquires to them abut a particular subject, then these angels witness to that person performing the Fajr prayer. Therefore, a Muslim must try to offer the Fajr prayer on time so that the angels returning back to witness his or her prayer being offered which nonetheless ensures the entry to heaven by the Muslim.

There is no denying the fact that prayers is a means of invoking Allah Almighty. In this invocation a Muslim can ask Allah Almighty for anything, whether it is paradise, the expiation from sins or receiving of Barakah and so on. The one thing that Allah Almighty provides a Muslim without asking is His protection, regarding which Prophet Muhammad (PBUH) said in a hadith:

“Whoever prays the Fajr prayer, he or she is then under Allah’s protection. So beware, O son or daughter of Adam, that Allah does not call you to account for being absent from His protection for any reason.” (Muslim)

From the hadith it is clear that the one who offers Fajr prayer is directly under the protection of Allah Almighty. Therefore, if a Muslim wishes to spend the day in a way where he or she does not need to fear anyone, then offering Fajr prayer is a means of doing so at the beginning of the day.

“The two Sunnah cycles of prayer preceding Fajr prayer are better than this world and all that it contains.” (Tirmidhi)

Quick Tips For Waking Up Early For Fajr:

In short, other than the obvious rewards and benefits of offering Fajr prayer as discussed above, the offering of Fajr starts the day of a Muslim with the name of Allah and gives him or her the right foundation to have a righteous day that is spent under the blessings of Allah Almighty.