Everyone who is a Muslim or who has little knowledge about Islam is aware of the fact that Islam has five pillars which include Tawheed, Salah, Sawm, Zakat and Hajj and every Muslim tries to establish and maintain these five pillars throughout his or her life. However, what only the learned and thoughtful Muslims understand is that Islam is much more than these five pillars only. They are aware of the fact that fulfilling one’s obligations towards Allah Almighty in the form of establishing the five pillars of Islam is one part of Islam and there is another part as well. That other part is the obligations one has towards other people.

Ethics that teach civility to a person are the inner teachings of Islam. The religion Islam is not only confined to Muslims obeying Allah and spending their lives in His praise and worship, rather Allah has made obligatory upon Muslims to take care of their fellow beings as well and live with them in a peaceful and loving manner. 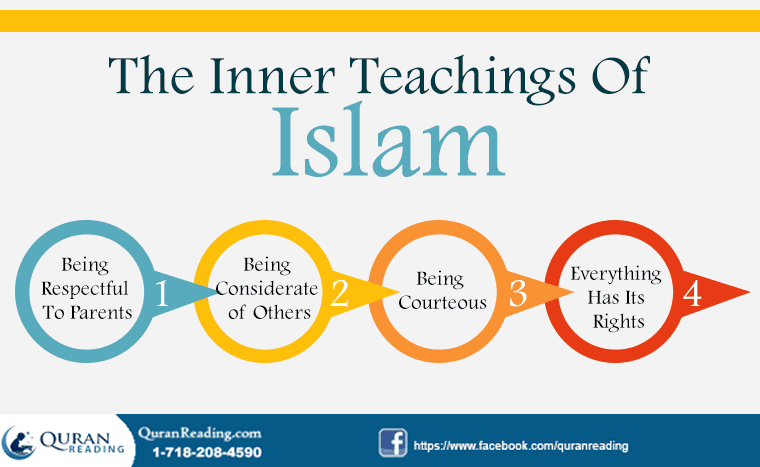 The lines below give some examples of the inner teachings of Islam that focus on establishment of ethics and care for other human beings.

Being Respectful To Parents:

Islam is not just a religion that gave respect to parents, rather it challenged and abolished the contemporary notion at that time that held father at a more prestigious place than mother. Islam gave a far superior and better place to mothers which made equal to fathers if not supersede in stature of respect. A narration in this regard is as follows:

From this ayah it is clear that if there is someone that deserves the best behavior and best companionship, it is the mother of a person. This hadith tells of two things, firstly that the general notion of considering the mothers somehow lesser than fathers is wrong and secondly, that human relations are also of importance and one needs to be respectful to the parents. If Allah were the only one that a person would target, then Prophet (PBUH) said about the mother and father, therefore, one must realize that worshiping Allah Almighty is no reason for a Muslim to forget his or her obligations towards the parents.

Being Considerate of Others:

If there is any religion in this world that tells its followers to be considerate of others the most, it is Islam. The religion Islam puts great emphasis on taking care of the feelings of others and not doing or saying anything that might hurt them or make them think inferior of themselves. Prophet Muhammad (PBUH) said in a hadith:

“When you are three persons sitting together, then no two of you should hold secret counsel excluding the third person until you are with some other people too, for that would grieve him.” (Bukhari)

Talking to someone in private in front of a company is perhaps the least of offensive things to do, however, Islam goes to this extent as well and condemns its followers from performing such an action even. The word used in this hadith for describing the feelings of the victim is ‘grieve’ which is hardly a sentiment which we care about these days. Therefore, Islam is the most considerate of religions and it commends its followers to incorporate the same feeling as well.

Being courteous towards other fellow beings is another major preaching of Islam. In one of the narrations:

This narration shows the extent to which Islam goes pertaining to being courteous and careful of other people around. In addition to the feeding hungry people, the hadith also gives another hint and that is about extending greetings to others whom one knows and to whom one does not know as well. This perhaps is the biggest problem with people at present, because we try to limit ourselves and our goodness only to those whom we know without considering the fact that the circle of this goodness can extend to other people as well. Thus, Islam encourages its followers to greet the ones whom one does not known in order to ensure that the love between people expands and takes others into its circle as well.

Everything Has Its Rights:

Another inner preaching of Islam is that in addition to taking care of other people, every other living thing has its rights and those which are not living or symbolic in nature have the rights of dealing with them in a particular mannerism. In one of His hadith, Prophet Muhammad (PBUH) said:

“Beware! Avoid sitting on the roads.” They (the people) said, “O Allah’s Apostle! We cant help sitting (on the roads) as these are (our places) here we have talks.” The Prophet (PBUH) said, “If you refuse but to sit, then pay the road its right” They said, “What is the right of the road, O Allah’s Messenger?” He said, “Lowering your gaze, refraining from harming others, returning greetings, and enjoining what is good and forbidding what is evil.” (Bukhari)

If a place such as road side has its rights and manners of sitting there, then one could easily assess the kind of rights the mosque or the home of a Muslim would have. Therefore, Islam is not just offering prayer in the mosque and doing whatever you want to do in the market afterwards, rather it needs and commends a person to practice self-control even afterwards as well.

In a nutshell, all the worshiping of Allah Almighty and fulfilling the five pillars of Islam is one half of the Islamic teachings. The other half of Islamic teachings is about humans the way one should behave and deal with them in order to ensure that one brings peace and ease to the life of others around.