If you do not know how to correctly read the Quran in Arabic, then join Quran Reading Academy for online Quran teaching classes to improve your Quran recitation and understanding skills.

Ramadan is the 9th month of Islamic Calendar, observed by Muslims World wide as an act of fasting to commemorate the revelation of Quran on Hazrat Muhammad (PBUH) as per Islmaic dogmas. The ritual of fasting among Muslims redirects heart away from worldly activities to purify the soul by freeing it from negative and harmful activities. Ramadan is the best practice for self-improvement, self-control, discipline, and empathy to encourage charity (Zakat) towards the less fortunate ones.

Ramadan And Its Phases

Ramadan lasts 29 or 30 days depending on moon sighting and according to narration, Allah divides this noble month into three parts. First Part reflects mercy of Allah, second part reflects forgiveness of Allah and the third part reflects safety from the hell (Jahanum). Allah is the only true merciful and Ramadan is His month of mercy and forgiveness providing Muslims an opportunity to seek refuge from Hell for their sins and forbidden acts. The only way to attain the true essence of Ramadan is to do Zikar as much as you can.

Allah says in the Qur’an “Remember Allah abundantly, in order that you become successful” [8:45] 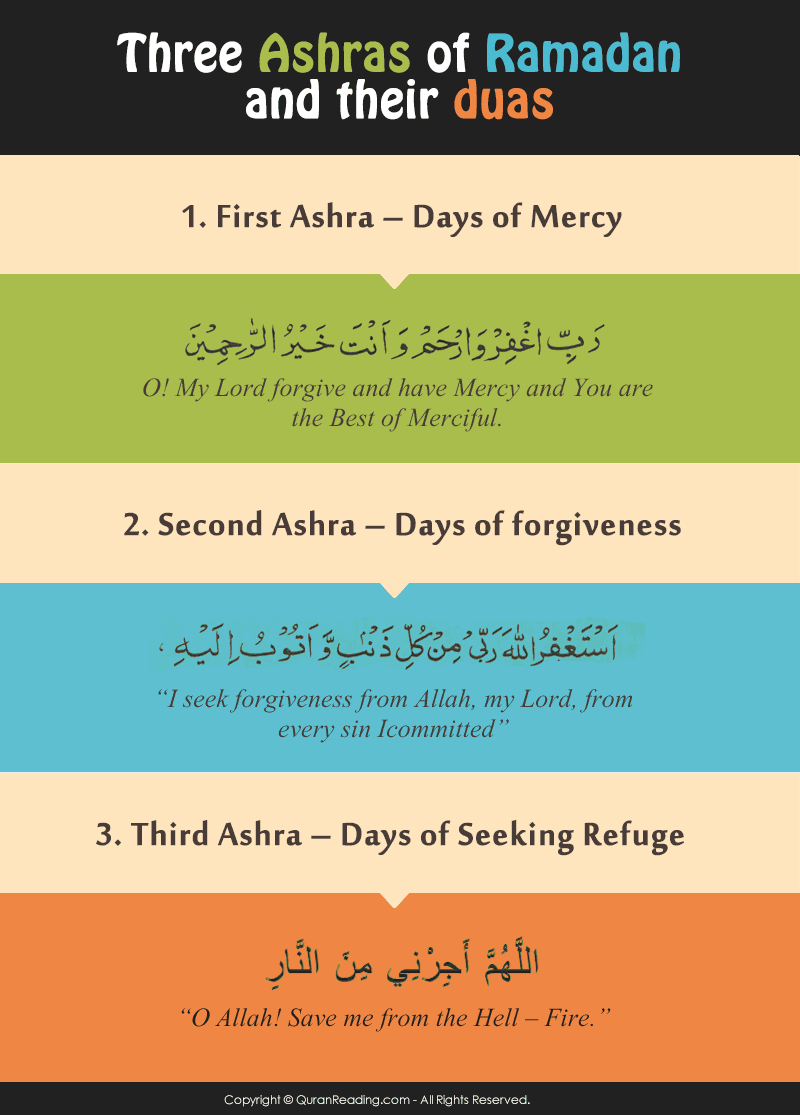 Ramadan And Concept Of Ashra

The word Ashra is an Arabic word meaning ten. Ramadan has three parts and each part is of ten days, making it a month of three Ashras.

The first ten days of Ramadan is to seek mercy from Allah, as His mercy is boundless and it is unto us to ask for His mercy to be shower upon us. Dua for First Ashra is:

Translation: O! My Lord forgive and have Mercy and You are the Best of Merciful

Be Merciful To Fellow Beings

Forgiveness is to do Astaghfaar for all sins committed so far by Muslims especially in the second Ashra of Ramadan and to repent unto Allah. Do Astaghfaar, feel sorry, desist from committing it again, and make sure not to fall for the same sin again.Dua for the second Ashra is:

Translation:  “I seek forgiveness from Allah, my Lord, from every sin I committed”

These are the days of Maghfirah and in the mid of Ramadan Allah’s forgiveness is at peak. He forgives only those who prostrate in front of Him with ashamed spirit and pledge in heart not to do the same again ever. Do Tauba as Allah loves those who repent on their sins, verily He is the only forgiver.

While you are asking for Allah’s forgiveness in this Ashra make sure that you do the same to our fellow Muslims by adopting alike trait of your Lord and let forgive them for all their deliberate mistakes.

The last Ashra comprises the vital days of Ramadan as it unveils those days that are termed as “mother of all days- Lailat-tul-Qadar” whose reward is the highest among rest of the days. Though the entire month is a blessing, yet Allah has provided Muslims with a night the last Ashra, night of decree greater in virtue and is better than the nights of thousand months. Stated in Quran

“We sent it (Quran) down on a blessed Night. Verily,We are ever warning. Therein ( in that Night) is decreed every matter of ordainment. Amran (i.e. a command or this Quran or His Decree of every matter) from Us. Verily, We are ever sending (the Messenger) (As) a Mercy from your Lord.” [Ad-Dukhaan 44: 3-6]

Muslim besides zikar and recitation of Quran do Itikaf and observe special Nawafils, Salatuh Tasbeeh in third Ashra for beseeching sanctuary from hell. Dua for the last Ashra is

Translation:  “O Allah! Save me from the Hell – Fire.”