In the world of today there is exploitation, there is injustice, there is poverty, economic depression, maltreatment of women, and tyranny of all kinds and sorts. All of these elements put the whole existence of humanity and all the progress made by humans into question. If this what progress has brought us, then how are we any different from the people of the time of ignorance?

The kind of situation or plight the world is in today, it was the same about 1500 years ago in the pre-Islamic era as well. At that time there was subjugation of women, there was idolatry, there was economic crisis, injustice and exploitation of the poor. However, when Islam came the whole scenario changed for better and Islam gave solution to all these problems as a result of which for centuries after the arrival of Islam the world was a better place and people knew what their rights were and how to go about living life in a better way.

The question to ask is that if Muslims were such good and brought such a change in the world, then where are they now when the world needs they once again and is in dire need of reviving the old and original values brought forward by Muslims? The lines below try to find out the answer to this question.

Muslims In The World:

It is not that Islam has disappeared from the face of the earth or Muslims have gone into some sort of hibernation, rather the fact is on the contrary and Islam is the fastest growing and the second biggest religion of the world. Muslims are not limited to Arabia or Asia only, rather Muslims have now spread to all the continents of the world and thus, the Muslim population has spread all across the world. Therefore, the fact is established that Muslims exist and that too in a substantial quantity, then the question that arises is that how come they are not able to make the world better? Moreover, how can the religion that first was a religion of peace is now a religion of violence and aggression? 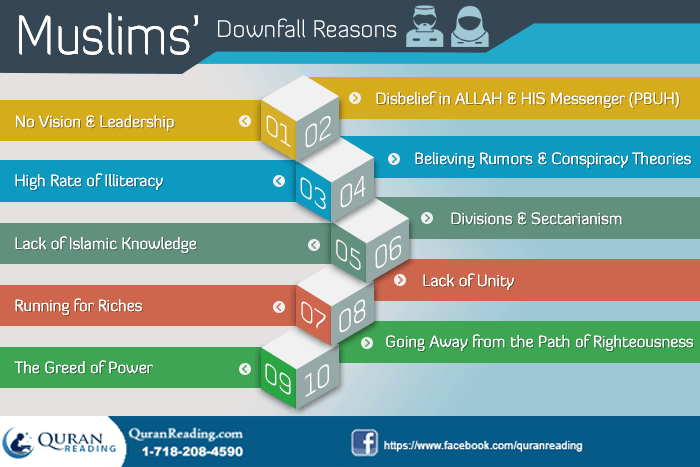 There are various reasons behind this decline of Muslims as a nation. Muslims who were once the best of the nations and ruled over half of the world with a system that guaranteed justice and peace are now in a plight where they are oblivious of their rights, duties and have fallen prey to violence and aggression. Some of the major reasons that have caused Muslims to behave in such a way are discussed below:

The primary reason why Muslims are in such a miserable plight and aren’t able to do anything pertaining making world a better place is the lack of Islamic knowledge. The knowledge of Islam has just been marginalized to the circle of scholars and ordinary Muslims either do not pursue Islamic knowledge or they are not let to do so. As a result of this control of knowledge and lack of its availability Muslims do not know what their religion tells about the matters upon which they are in dispute or how their religion works on them pertaining to reshaping their lives. Thus, all the violence, the oppression and subjugation of women that is associated with Islam these days is just a wrong projection and misinterpretation of Islam which could all be bettered if Muslims start to gain Islamic knowledge and try to understand things under the light of Islam.

There is no denying the fact that the seeking of Islamic education makes a Muslim a better Muslim, however, one cannot deny the importance of worldly education as well. All the progress that one witnesses at present usually comes from the Western countries and the reason behind that is their efforts in the field of education. The reason why Muslims are far behind others whilst being one of the strongest nations of the world is the fact that Muslims have ignored the importance of worldly education and consider it as a vice rather than a virtue. If Muslims will not progress in worldly education, then they would never be able to compete with the Western world, and if they won’t compete then they wont succeed and if they don’t succeed, then they will have no other choice then to accept what the West gives them, whether it is biased knowledge or technology that contradicts with Islamic principles. When such options are given to Muslims they avoid opting for them which puts them further into the abyss of backwardness and ignorance. Therefore, the seeking of worldly education should be given importance if Muslims are to rise again and stand with the developed nations.

The Lack Of Unity:

Islam does not differentiate between Muslims on the basis of their color or culture, rather it uses the word ‘Umma’ for all the Muslims, meaning that all the Muslims are a single nation. This was the case when Muslims were ruling half of the world and they would feel for each other as a single nation, however, one of the major reasons behind the decline of Muslims is their lack of unity. Muslims forgot the true preaching of Islam and started differentiating between one another on the basis of color and culture. When this differentiation initiated, the ultimate result was schism between the Muslims and this lack of unity ultimately leading Muslims to not consider the other Muslims as brothers or a part of a single nation. Thus, this lack of unity has fostered selfishness among Muslim countries and this war of personal interest has caused Muslims to go against each other and take care of their individual matters only instead of focusing on the bigger picture and working for the rise of Muslim community.

In a nutshell, history knows Muslims as one of the glorious nations of the world that embodied truth, justice, peace and unity. However, Muslims at present lack all these elements and this is the reason behind their being oppressed and backward in the present world. Hence, for Muslims to rise again on the map of the world and be known, it is imperative that firstly they get their knowledge of Islam straight, then they should work on getting worldly education as well and then try to bridge the gap between Muslim nations and grow closer to one another.