Hijab women veiling represents a woman’s submission to her Creator and her connection with the faith. Hijab is a symbol, but in reality, it is much more than that.  Hijab or women veiling is a religious obligation, which a woman has to commence. When a Muslim woman wears Hijab she is obeying and submitting to Allah. Allah says in Holy Quran: “O Prophet, tell your wives and your daughters and the women of the believers to bring down over themselves (part) of their outer garments. That is more suitable that they will be known and not be abused. And ever is Allah Forgiving and Merciful.” (Quran, 33:59)

From above verse of Quran, we can say that Hijab or women veiling is important in Islam and all Muslim women should wear Hijab. One of the functions of Hijab is to protect women from misdeed and harm. This particularly includes various forms of sexual abuse and harassment, which are common in societies nowadays. The Hijab sends a signal to men that the wearer is a modest and subdued woman who should not be bothered. 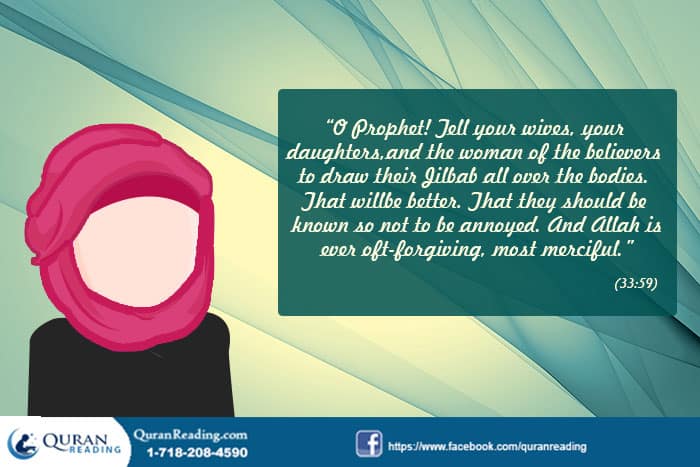 Importance of Wearing Hijab in Islam

Islam has introduced Hijab as part of the decency and modesty of Muslim women. Most Muslims who wear the covering call it a Hijab, which is an Arabic word meaning “cover.” Women veiling or Hijab is an Islamic Dress code for Muslim Women. Allah says in Holy Quran “This is more appropriate so that they may be known [as Muslim women] and thus not be harassed [or molested].”(Quran, 33:59)

Muslims believe that their true purpose of life is to worship the Creator Almighty Allah according to His instructions, as revealed in the Holy Book Quran and through the teachings of Muhammad (SAW), the last Prophet of Islam. Modest clothing is an essential aspect of worship in Islam as well just like other forms of worship. Muslim women are ordered by Allah to wear Hijab and veils. Covering the beauty of a woman is for her honor and protection rather than abolishment. Virtues of Hijab can be judged by Quranic verses as women veiling is mentioned in Quran clearly.

Allah mentioned in Quran: “And when you ask (the Prophet’s wives) for anything you want, ask them from behind a screen: that is purer for your hearts and for their hearts.” (Quran, Al-Ahzab: 53)

From above Ayah, we can conclude that Hijab is purity and the heart will become more pure with wearing Hijab as it protects from evil actions and thoughts. Hijab and women veiling are not meant for restriction somewhat it is a means in which Muslim society may function in an appropriate manner. Islam protects and safeguards the individuals and the society from awkward situations. So while wearing Hijab, Muslim Women protected and also safeguarded from evil deeds and thoughts.

Hijab gives the women an air of authority, dignity, and respect. Only those who are well behaved can expect admiration and high esteem from others. We can earn these blessings while performing good deeds for the pleasure of Almighty Allah and wearing Hijab is also one of the acts of good deeds and obedience to Allah Almighty.

Wearing Hijab does not have demerits and those who wear it have more strength and confidence. We as Muslim women should make a practice to wear hijab so that we can obey the Almighty Allah and can earn blessings from Him in both worlds. Women who wear Hijab Almighty Allah give them respect as well as keep them pious and free from any disturbance.