Fatima (May Allah be pleased with her) was the youngest and the most beloved daughter of Hazrat Muhammad (PBUH) and Hazrat Khatija (R.A). She was born just about five years before her Father (PBUH) was granted the first revelation from Allah SWT. It was time when the Holy Prophet (PBUH) resolved a conflict between the Quraishi tribes over reconstruction of the Holy Kaaba by placing a black stone. Her Mother (R.A) did not send her away to nearby village for purpose of her early bringing up against the common tradition of that point in time; rather she was brought up at home.

When Muhammad (PBUH) was chosen as the last Prophet by the Almighty, Fatima (R.A) was only 5 years old, and readily accepted Islam along with her Mother and some other noted family members. Right from her early age, she acquired the best possible qualities from her parents. She was nicknamed as Al-Zahra, which means “the fabulous one”, greatly because of her remarkable resemblance to the Messenger (PBUH) of God in her overall personality. The prophet (PBUH) once said:

Due to her extraordinary character, she was compared to other Great ladies including Maryam (A.S), the Mother of Isa (A.S) despite her little age and experience than the rest. But, because she was nurtured mostly under the direct supervision of the Prophet (PBUH), so she was able to obtain the very best of the wisdom and understanding of matters. 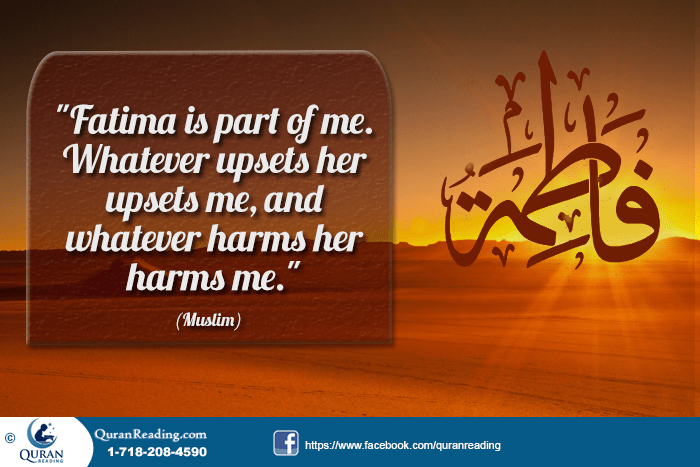 Now let us briefly discuss the most prominent instances from her life:

Right from her early years of age, she had the best of the best disposition in every respect. She was courageous and showed her tremendous love for her Father on every occasion. After the Apostle (PBUH) of Allah revealed about His Prophet Hood, He was mistreated by the Quraishi people. They always tried to make things difficult for Him, but the little Fatima (R.A) would always stand by Him all the time, come in front and face the non believers bravely. Abd-Allah Ibn Masood (R.A) narrates:

“The Prophet (PBUH) used to pray at the Ka’bah, and Abu Jahl and his companions were sitting there. They said to one another, ‘Who will bring the intestines of the camel of so and so and put it on Muhammad’s back when he prostrates?’ So the most wretched of people went and brought it and waited until the Prophet (PBUH) prostrated, then he put it on his back, between his shoulders. I was watching but I could not help him because I did not have any power. They started laughing and leaning against one another (because of their laughter), and the Messenger of Allah (PBUH) was prostrating and did not raise his head until Fatimah (PBUH) came and removed it from his back. Then the Messenger of Allah (PBUH) raised his head, and said, ‘O Allah, deal with Quraysh,’ three times. They became worried when he prayed against them, because they used to believe that du’aa’s made in that land would be answered…” (Bukhari and Muslim)

This shows that she had to go through a hostile environment of non cooperation and abuse of Hazrat Muhammad (PBUH) from such a tiny age (round about 10). One can only imagine being living in a the time period when everyone is opposing one`s family, and make its life hard, but Fatima (R.A) never trembled and represented high sense of determination and care for her Father.

On another occasion, Fatima (R.A) was passing by in a street where Abu Jahl, slapped her in the face on no grounds. She, instead of feeling dishearten, went straight to the leader of Quraish, Abu Sufyan and complained about the incident, who took her to Abu Jahl and asked her to slap him right in his face. After she told this occurrence to the Holy Prophet (PBUH), He was very pleased with this just action of Abu Sufyan and prayed for his acceptance of Islam. In this way, Fatima became the cause of this supplication of Muhammad (PBUH), which was ultimately accepted.

She ever went through highly tensed times when all the tribes boycotted her Father and those who had accepted the religion of peace, when the siege of Shi`b Abi Taalib, a small valley which the uncle of Muhammad (PBUH) made for shielding Muslims from Makkan oppressions. For almost 3 years, the disciples of Islam had to face that blockade. Soon after it was over, Fatima (R.A) had to bear the tragic loss of Her Mother, Khatija (R.A), and the grandest defender of His Father, Abu taalib.

All such heartrending happenings in her early life greatly affected her health, which is why she remained sick for most of her life, but she always acted as an epitome of patience and determination throughout the process.

The love of Prophet (PBUH) for her daughter

Among all children, Faitma, the youngest daughter of their parents, enjoyed the unparalleled love from them. The Holy Prophet (PBUH) is noted to have said:

“Fatima is part of me. Whatever upsets her upsets me, and whatever harms her harms me.” (Muslim)

The great degree of affection of Muhammad (PBUH) for her daughter can be seen from the fact that whenever Fatima (R.A) would enter the room, if He (PBUH) was sitting, He would get up for her and kiss her on her forehead. Also if the Prophet (PBUH) was traveling and entered alMadina, the first thing he would do while entering the city is to go into the Masjid, pray 2 rakats and then to visit Fatima (R.A). And if he was leaving Madina the last thing he would do before leaving is to go and see her. This shows the special status of Bibi Fatima (R.A) near Muhammad (PBUH). It has been narrated by Hazrat A`siaha (R.A):

The people of Quraish worried about the lady from Bani Makhzum who had committed theft. They asked, “Who will intercede for her with Allah’s Apostle?” Some said, “No one dares to do so except Usama bin Zaid the beloved one to Allah’s Apostle.”

When Usama spoke about that to Allah’s Apostle (Sallallahu ‘Alaihi Wa Sallam), Allah’s Apostle (Sallallahu ‘Alaihi Wa Sallam) said, (to him), “Do you try to intercede for somebody in a case connected with Allah’s Prescribed Punishments?” Then he got up and delivered a sermon saying, “What destroyed the nations preceding you, was that if a noble amongst them stole, they would forgive him, and if a poor person amongst them stole, they would inflict Allah’s Legal punishment on him.

“By Allah, if Fatima, the daughter of Muhammad stole, I would cut off her hand.” (Bukhari)

It shows the never dying love of Rasulullah (PBUH) for Fatima (R.A) that she was even mentioned for being punished in case of stealing of something, which was enough for others to adhere to the law of Islam.

Later stages of her life

Fatima (R.A) was always seen fulfilling her duties, e.g. at the time of migration along with her sisters and her step mother Sawdah bint Zam`ah from Makkah to Madina, she travelled along with fellow Muslims bearing mistreatment of Makkans while they were leaving the city. She was also observed being helpful to the injured in the battle of Uhud. When she was 18, the Holy Prophet (PBUH) used to receive many marital invitations for her daughter, but He was waiting for the right time, when in the 2nd year of immigration, He finally decided to let Ali (R.A) and her marry each other by their mutual consent. Hazrat Ali (R.A) was one of the very first to accept the message of Muhammad`s (PBUH) Prophet Hood and is considered among the ten rightful companions of the Apostle (PBUH) of Allah.. Ali (R.A) was poor, but she never complained about shortage of anything in her life, which conveys great message to women of this day and age to adopt modesty and patience. They had children who later sacrificed a lot in the way of Islam: Hassan, Hussain, Zainab and Umm Kalthum. Aa`ishah (R.A) narrated the time of death of the Holy Prophet (PBUH) in the following words:

Fatima (R.A) came walking in the manner of the Prophet (PBUH). He (PBUH) said, ‘Welcome, O my daughter.’ Then he seated her to his right or to his left, then he said something privately to her and she wept. I said to her, ‘Why are you weeping?’ Then he said something privately to her and she smiled. I said, ‘I have never seen anything like that which I have seen today, of joy so close to grief.’ I asked her what he had said, and she said, ‘I would not disclose the secret of the Messenger (PBUH) of Allah.’ When the Prophet (PBUH) passed away, I asked her and she said, ‘He told me, “Jibreel used to review the Qur’an with me once every year, but this year he has reviewed it with me twice, so I know that my appointed time (of death) is approaching. And you will be the first of my family to join me.” So I wept. Then he said, “Would it not please you to be the leader of the women of Paradise or the women of the believers?” So I smiled. (Bukhari)

It shows the extraordinary position of Bibi Fatima (R.A) that she was mentioned by the Prophet (PBUH) as leading the ladies on the way to Paradise and closeness of Muhammad (PBUH) to her both in this world and hereafter. She was extremely upset and was never smiling ever again after that. After a short time of only 6 months after this heartbreaking loss of her loving Father, she also died at the age of 29 in the Holy month of Ramadan and was buried at Baqee`.

In short, Fatima (R.A) bint Muhammad (PBUH) is a role model for all Muslim women. She had the best of the best personality characteristics which she largely acquired from her Father, like courage, patience, willpower, and above all complete faith in the Almighty.