If you do not know how to correctly read the Quran in Arabic, then join Quran Reading Academy for online Quran teaching classes to improve your Quran recitation and understanding skills.

Salah is one of the core components of the Islamic ideology. A prayer is generally a means of remembrance of Allah SWT, and getting His mercy and blessings. It is of two types: first is the obligatory Namaz, which is to be offered five times a day at specific times with no choice of skipping it under normal circumstances, while second is the Nafl (supererogatory prayer) which is optional and one is not answerable to the Almighty for not performing it.

“Nafl” is an Arabic word, which means “to get something extra”. There are many kinds of non obligatory supplications such as Tahayiat-ul-wudu (offering two raka`ts right after ablution), Ishraak (after Fajr, praising the Lord through Tasbeeh till the Sun has risen, then performing two or four raka`ts), Chaasht (carrying out at least two raka`ts when the Sun has set high), and Tahajjud (praying in the later part of night) etc. The last one has been even emphasized to be executed in the Holy Quran:

“And from [part of] the night, pray with it as additional [worship] for you; it is expected that your Lord will resurrect you to a praised station.” [Quran, 17: 79]

The above mentioned Ayah shows that there is one supplementary mode of requesting God, the Exalted for His compassion, which is performed during night time, and it results in finding a blessed rank on the Day of Resurrection. The prayer that has been referred to here is indeed the salah of Tahajjud. 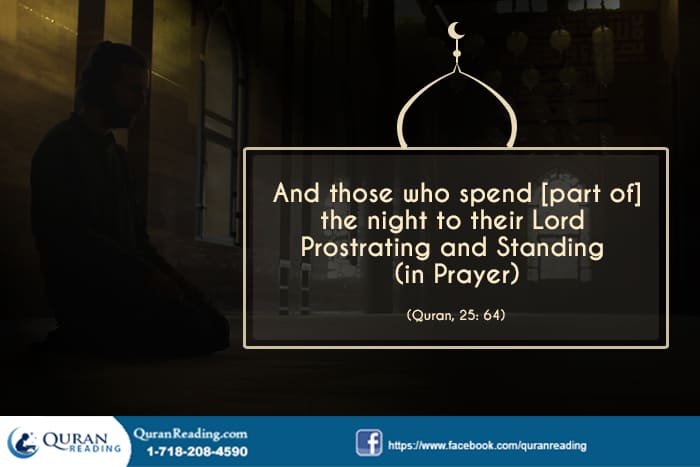 Timing Of This Salah

Tahajjud prayer is implemented in the final third of a night after waking up from one`s sleep. It cannot be offered straight away after Isha, but only following one`s sleep, neither when the time is near to Fajr.

Conditions And Format Of This Namaz

For the matter of carrying out the Salah of Tahajjud, one should:

As it is quite difficult to rouse from one`s slumber in especially after a daylong hectic routine, that is why this salah results in achieving the greatest amount of rewards and great status from the Gracious God.

“And those who spend [part of] the night to their Lord prostrating and standing (in prayer)” [Quran, 25: 64]

It means that offering Namaz of Tahajjud is one of the supreme signs of the true disciples of Islam that is why Allah SWT has declared them as His loyal servants in the above verse of Furqan e Hameed. The Holy Prophet (PBUH) used to offer this Namaz frequently, which increases it importance in a Muslim`s life manifold.

This Hadith is the testimony of the fact that the night prayer is the most desirable form of supplication near the Almighty after the ones which are mandatory to act upon. It has also been referred to as the source of attaining nearness to the Almighty.

“Be vigilant in standing up [in prayer] at night, for it was the practice of the pious before you. It is a means of gaining proximity to Allah Ta’ala, expiation for transgressions and a barrier from sins.” (Tirmidhi)

It means that Tahajjud salah has always been the way of the devotees of God`s instructions. And it is the great means of getting Allah`s closest attention, which is the key towards piety and faithfulness.

The Messenger (PBUH) has regarded this Salah as a great source of getting rid of satanic influence and attainment of almost all kinds of just desires and aspirations.

The above stated Hadith illustrates the great significance of the Salah of Tahajjud, whose positive effects start even with ablution resulting in freedom from persuasions of the Lucifer, who does not want to see a believer praying at this late hour of the night in front of Allah SWT. When one gets rid of Satan and its influence, resultantly it leads towards adoption of vital piousness and nearness to the Almighty, Who likes this act of His servant to the extent that He speaks to His Angels about it. Then, He tells them that He will grant His disciple with whatever it wishes for. All of this discussion elaborates the degree of importance of the Night Prayer, which is the greatest among all of the rest of Nafl (non obligatory) worships.

In short, this salah is the best one among the non obligatory prayers, and is the cause of getting Allah`s great Blessings and Mercy.