Holy Quran is a highly Revered and Sacred Book Allah SWT. It is the 4th and Final Heavenly Manuscript that was revealed upon the Last Prophet, Hazrat Muhammad ﷺ over the period of 23 years. It holds distinction in itself from all books of rest of the world in being the written by the Almighty Lord Himself, Who says:

In the above mentioned Ayah, the Creator of the universe says that He is the One, Who is the Sole Author of this great form of Revelation and He will protect it. That is the miracle of Furqan e Hameed that even after 1400 years, there has not been alteration of a single letter or word in this Blessed Volume unlike previous religious books which have changed over the course of time.

Since, Allah SWT is Himself the Architect of these Saintly Instructions, therefore, its recitation requires adopting a great deal of Adab (Etiquettes) from us Muslims. 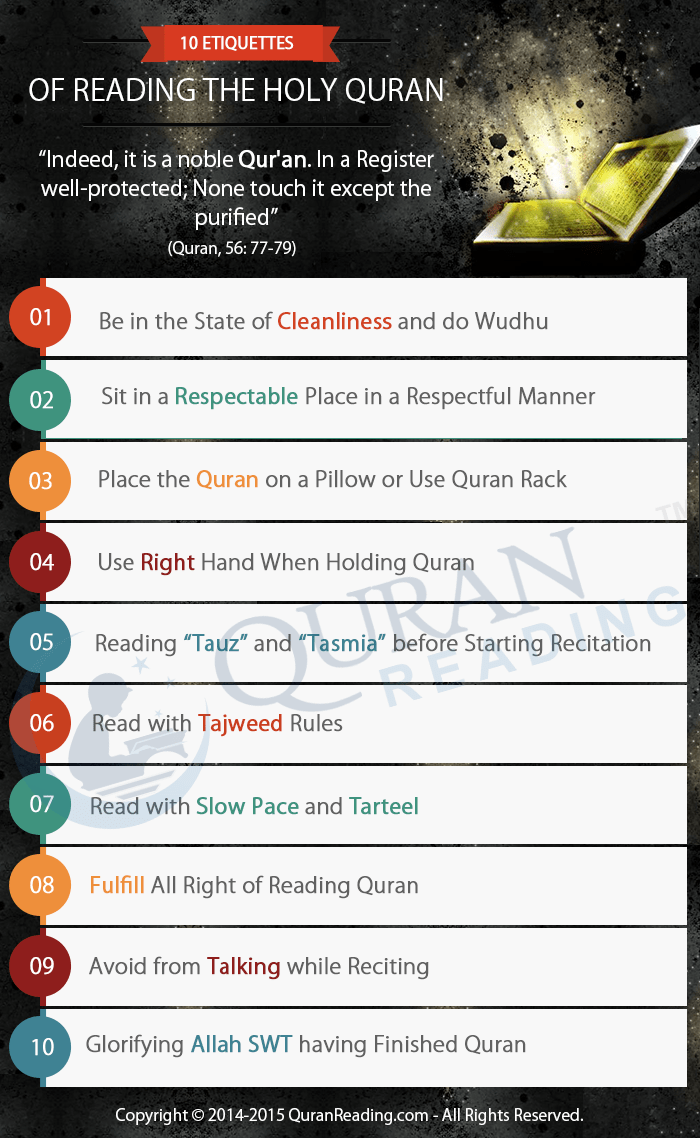 Some of the essential manners of reading the Holy Quran are described as under:

Before handling this Sacrosanct Scripture, one must have maintained a condition of complete purity in terms of both clothes and Wudu (Ablution) which is the prerequisite of every religious action.

This Quranic verse emphasizes on the great honor of this Sacred Book which calls for showing tremendous amount of respect to it.

Note: There is exception to the rule of Wudu only when someone is not carrying Furqan e Hameed in its hands and reciting the Holy Verses from its own memory.

Since, this is not any normal kind of book as the Quranic lines have descended from the Heavens, so one must pay due reverence to it by sitting in a decent and upright place. Besides, one must also sit down in a considerate and reverent fashion while gripping the Holy Quran in its hands so as to fulfill the required level of high opinion for this Hallowed Volume by action.

A great deal of care should be taken while placing the Holy Book of Allah SWT by resting it on a neat and clean pillow or other support and avoid putting it on the floor because of its extremely high status.

By fulfilling the Sunnah of the Holy Prophet ﷺ, one should hold the Holy Quran in its right hand to show due admiration to it. Narrated by Hazrat A`ishah (R.A):

“The Prophet PBUH  used his right hand in applying perfume, in eating, and used his left hand in the toilet or when removing any harm.” (Abu Dawood)

It means that Rasulullah ﷺ always utilized His right hand while doing any hasan (good) work and used His left hand in accomplishing other acts. Therefore, one must use its right hand while handling and reading the Sacred Verses of Furqan e Hameed.

One must read “Tauz” prior to the beginning the recital process in the following way:

Translation:“I seek refuge with Allah from Satan, the Accursed.”

Since, reciting the Holy Quran requires great attention and concentration level; therefore, every Muslim is advised to speak the above mentioned prayer to the Almighty to save it from Shaytan.

In addition to Tauz, one must also read “Tasmia”, which is given below:

Translation: “In the name of God, most Gracious, most Compassionate.”

This form of Veneration of Allah SWT is necessary act to perform because He is ever Merciful and Generous, Who forgives one`s sins and grants from His Blessings without any count.

Note: Both these must-do steps needed to be accomplished before starting the recital process of Furqan e Hameed no matter one is commencing from start of a Surah or in between.

The Holy Quran needs to be recited with great care in terms of its correct pronounciation as Arabic is a highly complex language and little error could lead to change in the true meaning of the words. Besides, it should also be read in a very striking and attractive tone as Rasulullah ﷺ has been narrated to have said:

“He is not one of us who does not make his voice beautiful with the Quran.” (Bukhari and Muslim)

Hence, reading this highly Revered Scripture of Allah SWT requires one to be concerned about fulfilling its due esteem with respect to Tajweed regulations.

The Sacred Book of the Creator of entire universe must be recited slowly to better understand and absorb the true gist of its verses.

Speaking specifically about fulfillment of the rights of this Revered Heavenly Manuscript, one must perform Sajdah (Prostration) in front of Allah SWT wherever it sees the Sajdah mark in Holy Chapters. In addition to that, one is also directed to take adequate amount of pauses on coming across various “Stop and Pause Sign” in between the Blessed Verses.

Due to immense significance of the Holy Verse of Furqan e Hameed, one must not break the momentum of recital process by sitting in a quiet corner, away from all kinds of distractions and avoid talking to anybody. It is also important because one should not converse about the worldly matters while reading the Sacred Book of Allah SWT as this act might lead to satanic influence.

At the end of a recital process, one is advised to say the following:

Translation: “The Highest, the Mighty Allah spoke the truth.”

It is the testimony of the Holy Quran being Authentic and Wordings of Allah SWT.

In short, these are some of the foremost ethics and etiquettes of reading the Sacred Book of the Almighty Lord which must be fulfilled in order to pay the required level of homage to the Holy Quran and understand it in the best way.